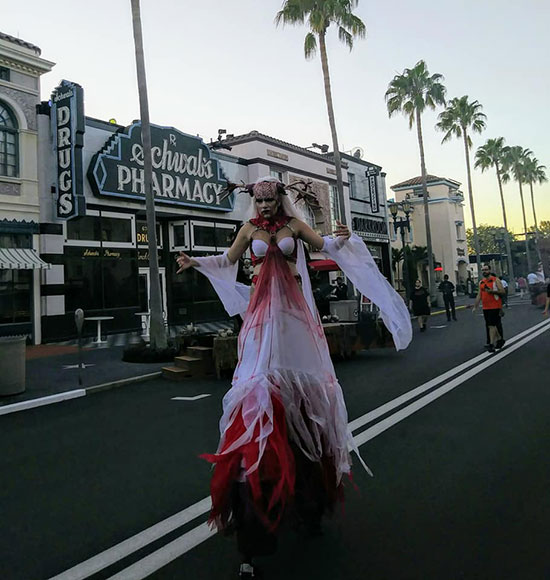 In 1991, Universal Studios, Orlando, began celebrating Halloween with a three-night event called Fright Nights. Back then, there was just one haunted house – The Dungeon of Terror – and tickets were less than $13 a night. Fast forward to 2017 – the annual event has transformed into the Halloween event of the year, drawing people from all over the world. The celebration has expanded from three nights to over 30, starting in mid-September and running through the first weekend of November. The name has changed to Halloween Horror Nights, and now, instead of one single attraction, there are nine separate haunted houses, another five “scare zones,” and a number of special shows and Halloween-themed vendors throughout the park. Tickets have gone up in price since the early 90s, but the entire experience is well worth the price. 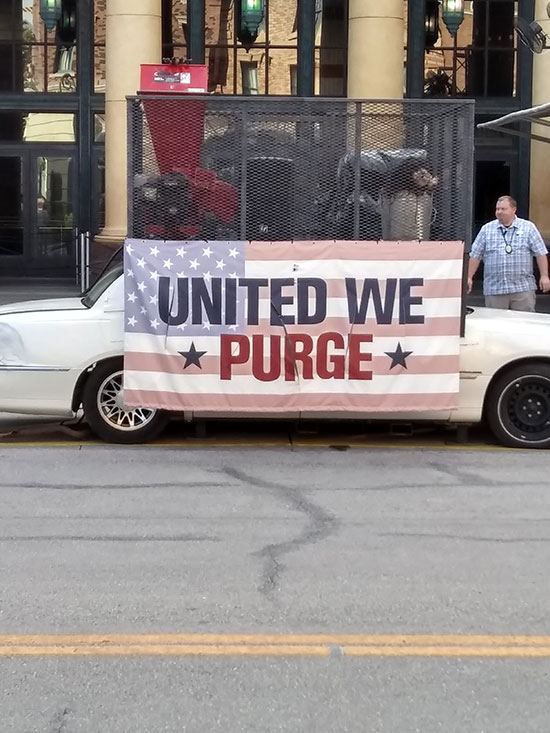 Twenty-seven years of Halloween fun, and I’m sad to say that 2017 marked my first time experiencing this particular extravaganza – but what a year to finally dive in. My wife and I left Kentucky after work on Monday, made a stop for the night in Forsythe, Georgia, and reached Orlando, Florida, around noon on Tuesday. We stayed at Universal’s Cabana Bay Beach Resort, a hotel very near the park, which has great food, great drinks, a pool complete with beach, and some of the most comfortable beds around. This hotel location gives multiple options to get to the park: drive your own car (and pay parking fees), take a shuttle bus (they run every ten minutes for the hours of the park), or take the scenic path, about a 15-minute walk.

The Halloween Horror Nights event is only on select nights, and covers one-half of the amusement park – the Islands of Adventure section stays open normal hours, while the Universal Studios Florida side shuts down about an hour and a half before the event begins in order to transform into the scariest place in Florida. In this middle time, anyone without tickets to HNN are let out of the park, while us scare-nerds hang out in one of the holding areas. We chose the one near Finnegan’s Bar & Grill, which gave us time to have a few drinks, including a bit of Kentucky bourbon to make us feel right at home, and peruse the menu in preparation for lunch the next day (they have a signature “potato and onion webb” you can cover in cheese and bacon that will blow your mind). By 6:30 pm, when the gates of hell were ready to open, we were more than ready to be frightened. 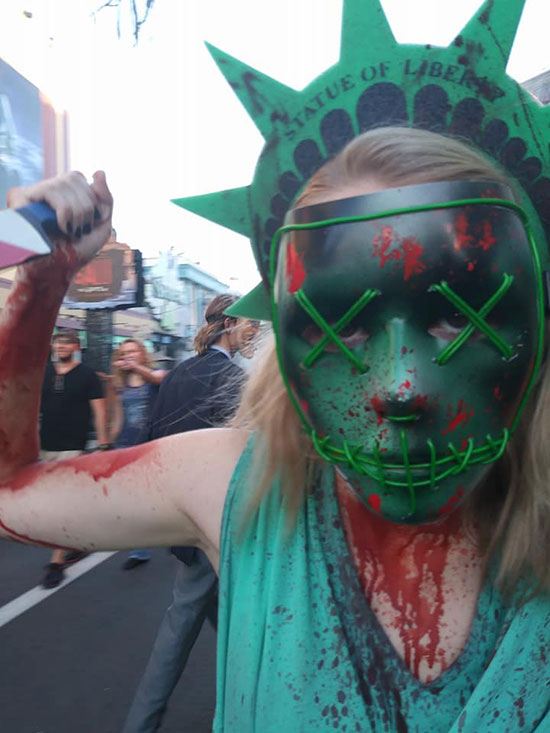 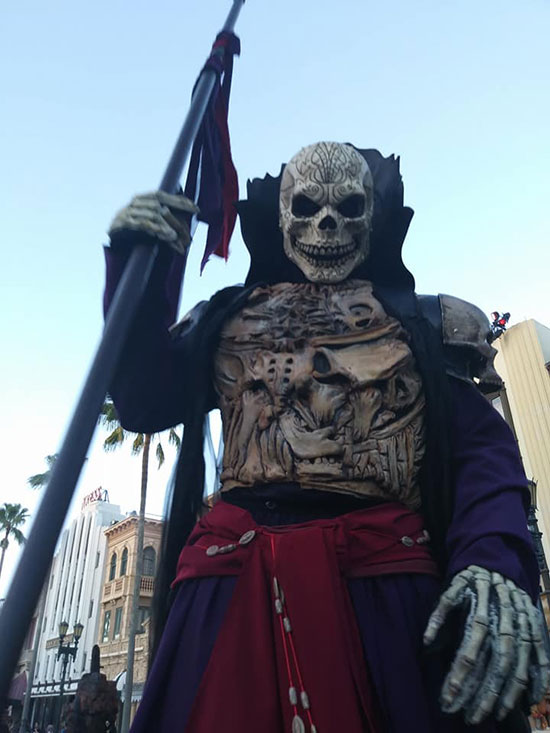 As I mentioned, there are nine haunted houses at the current Halloween Horror Nights in Orlando. These are divided into the intellectual property (I.P.) houses and the original houses. In other words, there are some based on movies or shows you’ve seen (the I.P. houses) and ones that the horror minds behind HHN created themselves (the original ones). If you plan things just right, you should be able to hit every single one – depending on the night, the park stays open until 1:00 or 2:00 am.

The I.P. houses garnered quite a bit of attention this year, and for good reason. The big deal for 2017 is The Shining, a house that takes you into the legendary Overlook Hotel via Stanley Kubrick’s vision of Stephen King’s nightmare tale – a mystery woman behind a shower curtain, an elevator gushing blood, a snowy hedge maze, it’s all here. Ash vs. Evil Dead leads you through a trailer park full of deadites, with only our chainsaw-handed hero to guide us to safety. Jigsaw is up to his old tricks in the Saw house, but aside from character actors jumping out here and there, this house is interesting to look at (great detail on some of these familiar death traps) but not all that scary. The Horrors of Blumhouse took on the epic task of combining three movie franchises – Insidious, The Purge, and Sinister – into one house. There’s a whole lot going on, what with “the further” and Bughuul and the anything-goes lawlessness of the purge, but with a few exceptions, all of the details tend to blur together. It’s creepy, but indistinct at times. The real stand-out of these five is the American Horror Story house: this haunt puts together highlights from three of the past seasons – Asylum (Season 2), Coven (Season 3), and Roanoke (Season 6) – to scare the hell out of all who dare pass through its doors. Unlike the Blumhouse haunt, AHS is able to successfully lay out the three seasons in distinct sections, each one scarier than the last. This is also one of the busier houses, so I’d recommend heading straight into this line when the gates first open, and maybe watch the wait times and try and hit it again as the night is winding down. There’s plenty to see in here, and it’s well worth a second go. 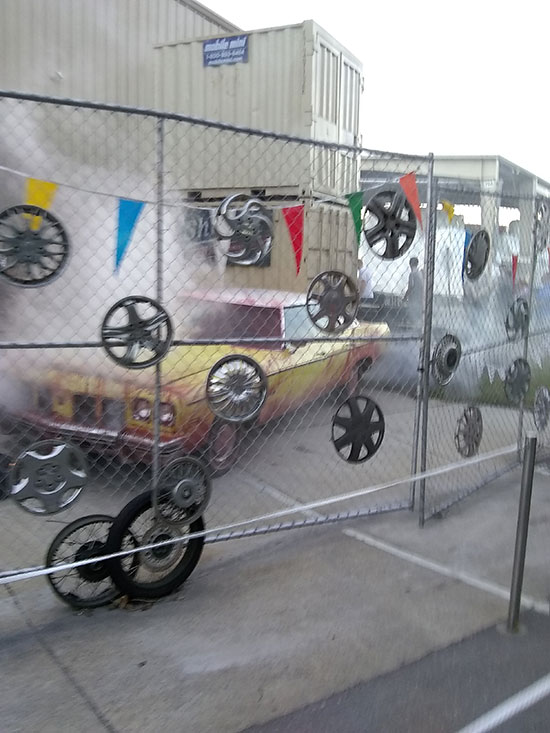 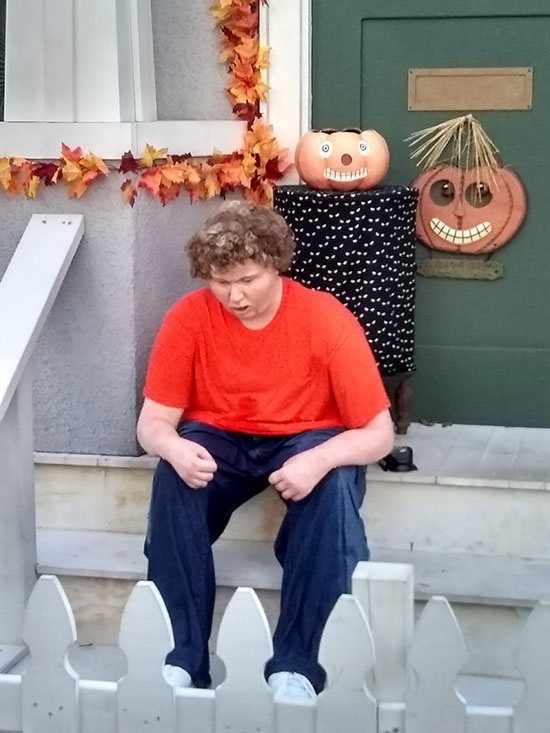 My initial thought was to try and hit all the “big name” houses first, then try to squeeze in as whichever “original” houses we could. That plan quickly changed. As impressive as the big houses were, the Universal Studios original houses were even creepier. Up first, Hive, a rundown house full of the worst kind of tenants: vampires. Some are sleeping, some are stalking the halls in search of blood, and near the end there’s a couple that know exactly how to scare even the toughest horror fans. Walking into The Fallen is kind of like taking a stroll into the outer reaches of hell. It feels like death is everywhere, and there are demons around every corner, waiting to scare the hell into you. Both of these are fun, well-designed haunted houses. Even better are the other two originals. Dead Waters is set in the swamps of the Voodoo Queen, and the look and layout of this house are amazing. For anyone who visited this event a couple years back, this house is based on the Bayou of Blood scare zone from HHN 24. This house could be a set straight out of a Hatchet film, but with the focus on voodoo. Dead Waters is a fantastic house, one of the best I’ve seen in years, and second only to Scarecrow: The Reaping. I’m a sucker for a good farm/scarecrow horror, and this one has it all – corn mazes trapping you in, a Depression-era farmhouse crumbling away, and a veritable army of scarecrows surrounding you on all sides. It’s creepy, it looks amazing, and it gave me goosebumps just walking up to it and seeing the rows of corn transforming Orlando, Florida, into my Midwest homeland. It’s a shame that there’s no time allowed to stop and soak in the details of each room, but then, if people did that, the lines would be three hours long.

In addition to the nine haunted houses, there are also five separate “scare zones” located throughout the park. What’s cool about these is that there is no line, you can walk through on your way somewhere else, or you can stroll leisurely through and soak in the atmosphere. While the Horrors of Blumhouse touched on The Purge a bit, there is also a separate Purge scare zone that is a must-see for all fans. Characters walk through in familiar costumes from all three films, a woman speaks from on top of a banner-draped bus, and just when you think you’ve made your way through the scary actors, you find out there are also victim actors begging passersby for help. Invasion! finds a bunch of aliens near their crashed ship interacting with the crowd, while soldiers try and herd the aliens, and anyone they suspect might be aliens, away from the public. Altars of Horror is a kind of mash-up of characters from ALL the houses in the park, where you’ll run into Jigsaw just before finding yourself face to face with the Grady twins. If you’re looking to get some cool photos of your vacation, this is the place to do it. Festival of the Deadliest might just be the ultimate party of the damned – ghouls of all kinds roam the streets, torches cast a glowing light on the festivities, and scantily-clad demons lure the onlookers toward their ultimate demise. And last, but far from least, we have the Trick ‘r Treat zone. Sam is running wild throughout the various segments of this area, as are Little Red Riding Hood, Cinderella, and the victims of the school bus massacre. Each section of the horror anthology film is represented here, and represented well, some with makeshift front doors set up to enhance the scenes and further the authenticity.

There is so much fun to be had at Universal Studios Orlando’s Halloween Horror Nights. If it fits into your budget, I’d recommend getting a day pass to the park in addition to the HHN ticket; there is a ton to do, and you will want to dedicate your night to the horror-specific events. During the day, hit up the Simpsons Ride, and Revenge of the Mummy (which is surprisingly fun and creepy for being based on the Brendan Fraser movie), and any Harry Potter ride you can find. The Men in Black: Alien Attack is a lot of fun as well, kind of an interactive shooting game in the form of a ride. And if you decide to go all out and buy a ticket to cover both parks (Islands of Adventure and Universal Studios proper), make Skull Island: Reign of Kong number one on your list – the line is almost as amazing and scary as the ride, and the ride is awesome. HHN also has two shows, Academy of Villains: Afterlife and Bill & Ted’s Excellent Halloween Adventure. By all accounts, these are great, but they didn’t fit into our schedule this time around, which is a shame since this is the last year for the Bill & Ted show. There are plenty of snack and drink stands throughout the park, and a couple tasty drink specials as well. There are also a ton of merchandise booths in the park, and while the prices are “park prices,” they’re not as bad as you might expect. 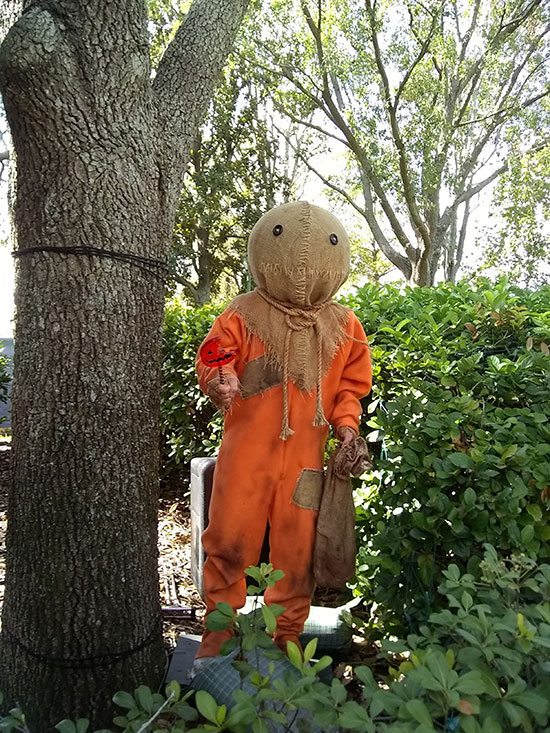 I cannot recommend Universal Studios Orlando Halloween Horror Nights enough. It is the perfect Halloween party for the grown-up horror lover. Yes, it can be pricey, but this isn’t just a night out, it’s a full-on vacation; not just a haunted house, but a total experience. If you’re able to make it in the next couple weeks (last day is November 4, 2017), you have all of the above and more to look forward to. And if it’s something that’s going to have to wait till next year, I’m sure you can count on just as many scares and surprises, if not more. I recommend staying close and taking advantage of the free shuttle services, allowing you to relax, not worry about parking or traffic or driving home tired and/or drunk. Express passes allow you a quicker line (once per house), so check online to see if the day you’re going is a lighter day or super busy. I’ve been lucky enough to see quite a bit of the United States, and I have to say this experience is near the top of my “all-time” list. It wouldn’t have been possible without my wife, road trip buddy, and my horror movie buddy, Jessica, as well as the extreme kindness and generosity of Ali at the Universal Studios public relations office, who helped us out with express passes so that we could catch as much as possible and then report back to you. To wrap this whole long pile of words up, go to Halloween Horror Nights, you’ll have the time of your life.