SYNOPSIS:
“A group of starfish-like aliens from the planet Paira, which is on the same orbital plane as Earth but on the opposite side of the sun come to Earth to warn mankind about a runaway planetoid known as Planet ‘R’ that is on a collision course with Earth. It is feared that when Earth is destroyed that their planet will be destroyed as well. However, their form causes people to panic, so they chose a female member of their race to take human form to spread their message. They then decide to contact a prominent scientist who has invented a new source of energy that can also be made into the most destructive bomb the world has known to destroy the planetoid. Unfortunately, the scientist is kidnapped by enemy agents who want to use the bomb for their own purposes. Now it becomes a race against time to find the scientist so he can complete his formula and save mankind.” (courtesy IMDB)

REVIEW:
How’s your astronomy? Planet Paira, as you know, occupies the same orbit on the same elliptical plane as Earth, but on the opposite side of the sun, which makes it impossible to see from Earth, so don’t try to find it with your telescope. I did, and look at what happened. When an envoy of starfish-like aliens arrive from said planet to warn mankind about a runaway planetoid that is on a collision course with Earth, fearing that their own planet will be destroyed as well, it’s up to humble Japanese scientists to attempt to prove that Nuclear bombs are good for us in…Warning From Space (1956)!

Warning From Space, or to translate it correctly, Unknown Satellite Over Tokyo, is a 1956 Japanese science fiction film directed by Koji Shima, who was a Golden Palms Nominee at the Cannes Film Festival the same year, but thankfully it was for his film Maboroshi No Uma (1955), not for this silliness. But this is actually quite a remarkable film when compared to the stock schlock science fiction that came from USA in the same year, including Earth Versus The Flying Saucers (1956), possibly the least impressive of the great Ray Harryhausen’s efforts.

Warning From Space was the first full-colour Japanese science fiction film, and while it’s certainly a camp treasure for today’s viewers, it was a terribly serious film in its day. It won Asia-Pacific Film Festival awards for Sound, Cinematography and Special Effects, but sadly the only available copy of the film has aged rather poorly, so you’ll just have to imagine the vivid sound, colourful photography and fantastic effects, okay? This dubbed version preserves the original story pretty much intact, probably because Hollywood were too lazy to edit-in the token American as with most Japanese monster movies, like Raymond Burr in Godzilla (1954).

Warning From Space was based on a novel by Gentaro Nakajima and the story mixes themes from The Day The Earth Stood Still (1951), about a warning against the creation of weapons of mass destruction, and When Worlds Collide (1951), concerning Earth’s imminent collision with another planet. You’ll also find many similarities with the British film The Day The Earth Caught Fire (1961), in which the Earth is sent spiraling into the sun, and I thought I’d mention the disaster film Crack In The World (1965) – just because I can.

The aliens look like children in a Christmas pageant dressed up as stars. Trying to kill them at first sight would be a little like shooting Patrick Starfish from Spongebob Squarepants – hang on, that sounds like fun. Toyomi Karita is quite sweet as she plays the tap-dancing nightclub alien cheesecake. This may surprise you, but despite her obvious talent, she never made another film. On the other hand, leading man Keizo Kawasaki appeared in some thirty seven films, including Diary Of A Mad Old Man (1962), Disheveled Hair (1961), Crammed Streetcar (1957), Vivacious Girl (1957) and Women And Miso Soup (1968) – I ordered that at a restaurant last night, but they skimped on the Women.

Warning From Space comes from the good people at Daiei Studios, who are best known for producing the Gamera series of giant monster movies, but not even his dizzying exploits could save the studio from bankruptcy. It was bought by the Tokuma Shoten Publishing Company in the seventies, finally being sold to Kadokawa Studios in 2002. Considering that the warning against super-bombs comes from the national cinema of Earth’s only nation to be atom-bombed into submission, a little more bitterness might have been expected. But there’s a sweetness about this film that makes it a wonderful children’s movie, yet good enough for a little more than its camp value, even for adults. And if you think this was bad, just wait until you see what I have planned next week for…Horror News! Toodles! 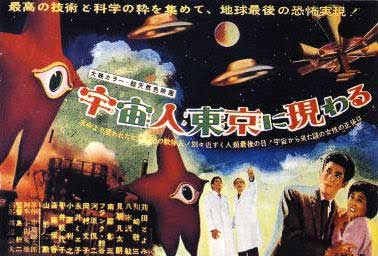