I had the pleasure of attending this year’s annual Comicon located in Colorado Springs, CO. The event was held by “Altered Reality Entertainment” who have hosted similar conventions all over the country. HNN (horrornews.net) was on-site to gather some photos and review the event itself.

Most impressive was the stellar # of celebrities featured at this event. A number of movie and television actors were present to sign autographs and take photos with those willing to shell out some cash. However fans could still walk by many of the booths in close view to see some of their old and new favorite actors of past and present. An impressive number of “The Walking Dead” actors were present (which is always a plus for an attending horror site like HNN!!) In addition 80’s to favorites such as several “Fast times at Ridgemont High” actors.

I was also pleased to see so many horror genre celebrities making appearances this year!

The temperature outside on Sat (the day we attended) was a sweltering 96% degrees which meant for many of the attendees that were in full costume that they were in for a meltdown or 2 running around in full body suits, masks, and cosplay gear. Though with that fact aside, locals were in full celebration with at least half of the attendees dressed up for the occasion. Fans were seen taking photos with each other and the various characters in attendance.

The event had several cool props on hand with the 1966 Batmobile being the star attraction. Attendees could get photos sitting in the car for a fee. 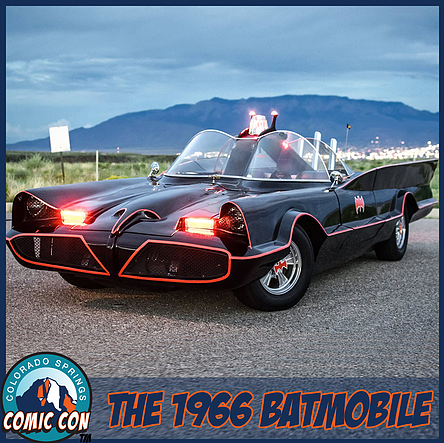 The building itself was a decent size however, there were so many attendees that every aisle was a struggle to get from one section to the other. On that note, I do have a few recommendations for attendees on future visits

1- Get your ATM cash “before” you attend the convention
(the ATM lines were at least 2 hours long with machines struggling to keep up with the influx)
you can get your cash at the gas stations located outside and avoid the hassle.

2- Don’t waste time eating at the event (another 1-2 hours), the area itself has restaurants all over the place. Parking was still reasonable, meaning you are better off leaving the event, walking next door to the # of eating spots and then returning later.

3- Better to leave babies and strollers at home, since it’s a bit too hot for them inside and the stroller makes it hard to move forward thru the aisles.

4- Get there early as ticket lines were long!

In all, a successful event with a whole smattering of well known comic books artists on hand. Art and prints for purchase were the main focus of many booths. I was hoping to see more vendors selling graphic novels and T-shirts though it was limited at this event. Fans who like collecting action figures have alot of choose from with several vendors focused specially on those items.

My takeaway here was that, this event had “so” many attendees it only makes sense to expand to a bigger arena in the future (if possible) – see photos!. With people shoulder to shoulder it made for a very hot environment to navigate inside. Of course, it’s hard to tell with weather during the August season, as one day could be in the 90’s an another be cool and rainy.

Me and my group had a great time seeing all the artisans and actors in attendance. We know this event will only get bigger as time moves forward.

The comicon is held every year at the Altered Reality Event Center. Fans can check in early, as the site is already being updated for next year.