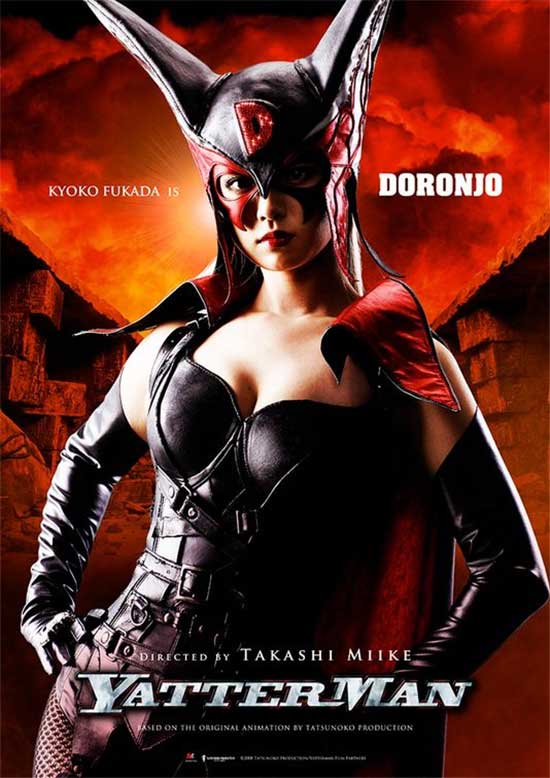 A team of young superheroes and their robots fight to protect their futuristic city from a bumbling gang of evil-doers – in order to do so, they must collect the four miraculous and sacred Skull Stones before they fall into the wrong hands!

Yatterman (2009) is a Japanese live-action film based on an anime television series, directed by the incredible (and incredibly prolific!) Takashi Miike. And I’m going to say this right now – it is a delight.

The film opens with a slow pan over a post-apocalyptic landscape, a destroyed and burning city. We’re introduced to our team of neo-steampunk/video-game-inspired heroes. Yatterman are Takada Gan (Shô Sakurai) and Kaminari Ai (Saki Fukuda), who (with their robot friends) help to defend the world against evil and darkness. We know this because they break the fourth wall and enthusiastically introduce themselves straight to the camera, complaining when one of their robots steps in front of them and inadvertently ruins the shot. It’s a playful, tongue-in-cheek beginning that exemplifies the tone of this light-hearted comic book action-adventure with a sweet and silly love-story at its core.

Yatterman’s secret headquarters are built beneath the Takada Toy Factory, where engineering genius Gan and electronics heiress Ai create their robot and sentient mecha friends between their once-weekly adventures in ridding the world of evil. Yatterman’s first fight in the film is a madcap, cartoonish battle with Mistress Doronjo (Katsuhisa Namase) and her two bumbling henchmen. The fight ends when Doronjo accidentally pushes the self-destruct button on her own mecha, leaving her and her two henchmen to flee on a three-person tandem bicycle. During the escape, Doronjo is contacted by Dokurobe, the god of thieves, who instructs her to find the Skull Stone, a sacred object that has been broken into four pieces and scattered throughout the world – and threatens to punish her should she fail. Legend has it, once the four pieces are reunited, a miracle will occur.

That sounds like pretty good incentive to locate the pieces!

Not surprisingly, the Doronbo gang are not the only ones looking to capitalize on this juicy prize. Also desperately searching for the Skull Stone fragments is archaeologist Dr. Kaieda, who has so far managed to locate two of the pieces. One, he has left with his daughter, Shoko (Anri Okamoto). The other, he loses to the skull-headed monster-god Dokurobe in some pretty unfairly-matched hand-to-hand combat. Or, rather, face-to-pelvis combat.

As the hunt for the remaining Skull Stones heats up, the entire fictional city of Tokoyo is pulled into the zaniness, with hilarious and engaging results. A Doronbo-run auction ushers in a low-key song-and-dance sequence featuring giant props. A fantasy sequence mixes live action with animation. At one point, the heroes and villains embark on a road trip that takes them to “Ogypt” and throws them into an epic mecha battle in an ancient structure. At another, they journey to the “Southern Halps” with a quick detour through low-earth orbit, just for kicks. A mutual attraction between Gan and  Mistress Doronjo leads to some tension between the Yatterman duo, but true love wins out in the end (no surprises, here).

The costumes and makeup are insane and unlike anything I’ve ever seen; part Mario Brothers, part kigurumi, part Mighty Morphin Power Rangers, part Rocky Horror Picture Show. A dash of steampunk, a smidgen of Turbo Kid. The set design is equally unique and cheerfully vibrant. The charmingly-rendered CGI mecha controlled by Mistress Doronjo and her gang looks as though it has been constructed out of giant household objects – its signature attack includes firing giant carrots. 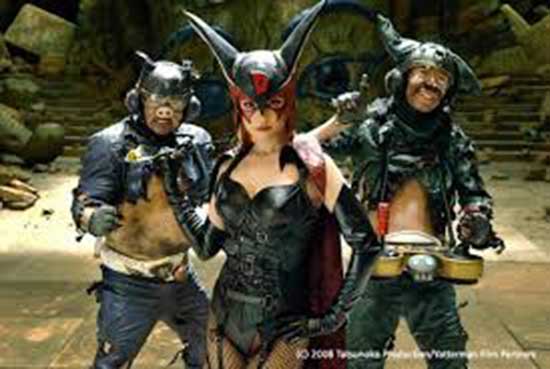 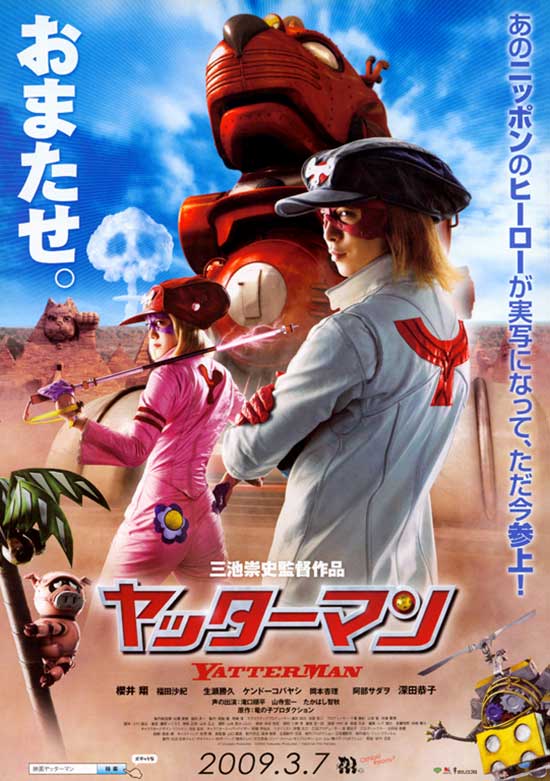 Kids will love the brightly coloured palettes, comic sound design, and frenetic fight scenes, but there is plenty of humour and charm here for adults as well. Miike directs the film with a light comic touch that meshes perfectly with its fantastical plot and setting and the actors turn in performances that are uniformly entertaining and supremely sympathetic (yes, including the villains). The cinematography is excellent, as expected from a Takashi Miike film, and includes so truly stunning mise en scène. The film fairly sparks with energy throughout – its lively pacing kept my attention while the characters stole my heart.