What makes horror such a great genre for movies, television, literature, and anything else you can think of? In a word: versatility. Horror isn’t always defined by gore and death, but rather the feeling of doom, gloom, and dread. It can be funny just as well as terrifying. Our little niche of cinematic and media bliss has given us great material like Army of Darkness and Alien to Warm Bodies and The Wizard of Oz (yes, it’s horror… witches, flying monkeys, houses dropping on people).

This wealth of material has provided us with decades of entertainment and some very delectable quotable lines. 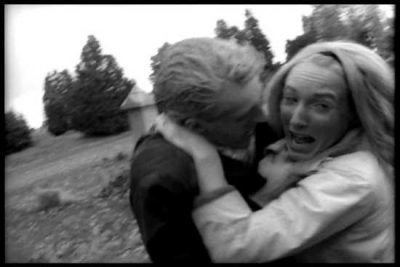 This great line was uttered in the beginning of the movie that gave birth to the modern zombie, George Romero’s “Night of the Living Dead”. Those words, though not horrific on their own, foreshadow all that is to come. In the graveyard as Johnny, Barbara’s dick of a brother, utters those words, we catch a small glimpse of Bill Hinzman’s “cemetery zombie” lumbering in the background. A seemingly innocuous line that gave birth to the zombie phenomenon. 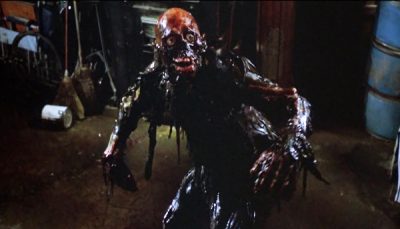 Let’s let the zombie train roll on. The Return of theLiving Dead is another classic. This one was penned, in part, by John A. Russo. The man, who some say (mainly him), is the unsung hero ofNight of the Living Dead, having helped Romero to create it and, to this day, claims he invented the term “zombie”. But, eh… who cares? Tarman lives, and he wants LIVE brains. Unfortunately, poor Suicide gets murdered by the melted man. Irony.

13. “All work and no play makes Jack a dull boy.” – Jack Torrance, The Shining 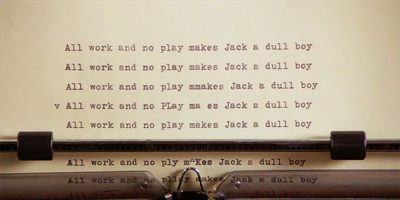 Let’s face it, there aren’t that many great American novelists. Stephen King is a mong them. He gave us The Shining and Father of the Year, Jack Torrance. While many cite “Here’s Johnny”, this quote I think is the most terrifying. First, it’s typed. It forces us to READ it. When you read, you ingest the information and it’s more powerful. And two, it shows the complete unraveling of the man. The loss of control. 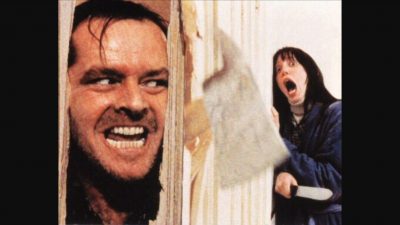 What can I say? Surprise! Look, you simply cannot mention this film, or quotes, and NOT include this one. Just as all work and no play makes Jack a dull boy, having an axe to grind with the Mrs. can really splinter a relationship. In fairness to Jack, they were headed toward a split anyway. 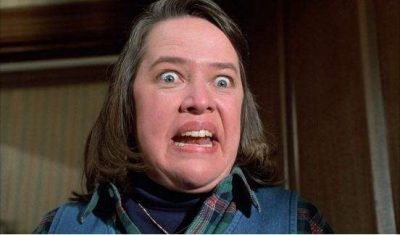 As writers, artists, and entertainers, we only want to be loved. Misery is, I think, about our obsession with fame and the lengths people go to just to have a piece of their favorite celebrity. Annie Wilkes represents all those fans. And this line sends shivers down your spine because you know that nothing ever comes from it. After all, the word “fan”, is just short for, “fanatic” … 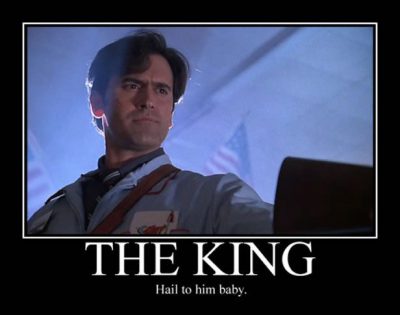 If you don’t know The Army of Darkness, then you don’t know what a great quotable movie is. Sam Raimi and Bruce Campbell, along with everyone else involved, gave us one of the greatest movies of all time. In my opinion, anyway. It certainly leans more toward the funny side of the horror spectrum, a definite departure from the first in the series. Ash is one cool dude. A badass, really. The entire movie is one gigantic blood bath filled with awesome quotes.

9. “A census taker once tries to test me. I ate his liver with some fava beans and a nice Chianti.” – Hannibal Lecter, Silence of the Lambs 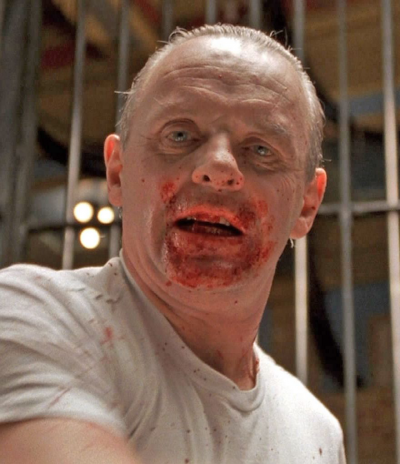 You have to appreciate a mad man in a cage who knows what pairs well with the other, other white meat. This scene, and quote, is very memorable and stands the test of time. For me; however, I never cared much for it. The line itself is a winner; however, the way he pronounces “chianti” bugs the hell out of me. The most terrifying part of the scene is the slamming of the cell door. It’s the mood of the thing that sets the line above. 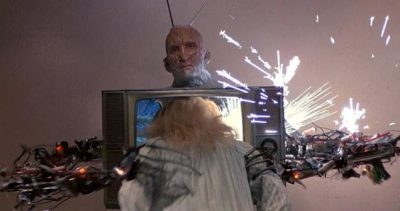 This is by far my favorite Elm Street. I love this line, scene, and the entire premise of the movie in general. And, I admit it, I really love the title track and Dokken. Poor Jennifer just wanted to be a little famous. Freddy did her dirty, but did it in a way that’s a classic and we love him for it. 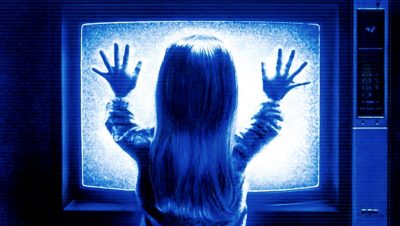 The television clicks on without you touching it. The white noise flickers, casting eerie shadows on the egg-shell white walls showered in darkness. The little girl turns to you and utters those words. Everything falls away, your hair stands on-end, and you’re instantly afraid. Welcome to Poltergeist and, frankly, that’s all I have to say about that. Moving on. 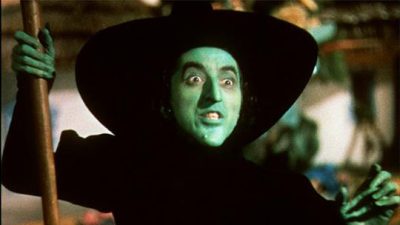 Yes, yes, I know what you’re going to say: “Hack, you’re an idiot, Wizard of Oz isn’t a horror movie!”, but then I say, “Oh, really? And Twilight is?” and then, well, you shut your cake hole because you realize that Twilight lands itself in the horror bin instead of where it belongs: the trash bin. A little girl is snatched up by a tornado and taken to a world full of good and bad witches, an evil wizard, a field full of poppies, a haunted wood, and, yes, hideous flying monkeys AND creepy little people with giant lollipops. A green witch appears in a burst of smoke, threatens a child AND her little basket dog. I call that horrific, 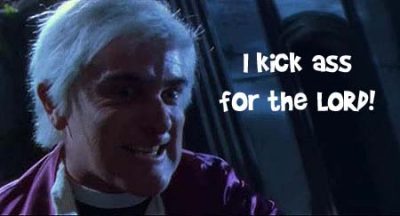 Before Peter Jackson took a one-way trip to the Shire, he made Dead-Alive (Braindead, if you’re a movie geek). It’s your basic zombie flick. Blood. Gore. Bad dialogue. Worse acting. Buuuuut some sick lines. Father McGruder is not your normal man of the cloth. He sees the Sumatran-rat zombie people and has a need to bust some heads.

Before you say THIS movie isn’t horror, I have 5 reasons WHY it is: Dracula, Wolfman, Creature from the Black Lagoon, the Mummy, and Frankenstein. That sound you hear? It’s the mic drop. Now, back to it. The debate has long been if Wolfman indeed had balls. Common sense says yes, but, hey, who knows, right? In the end, it’s proven: wolfman DOES have nards. 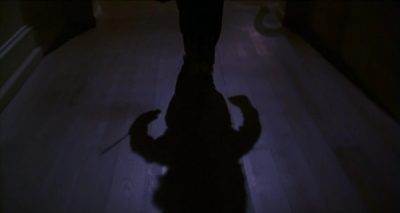 Everyone loves to quote Chucky. Sure, he’s a witty serial killer, but I think Karen’s line tops them all. She’s a widowed mom of one. She’s barely making ends meet as she tries to care for her kid. This doll shows up and turns everything to shit. She stands up for him, as most good parents would do. It shows her resolve and strength. 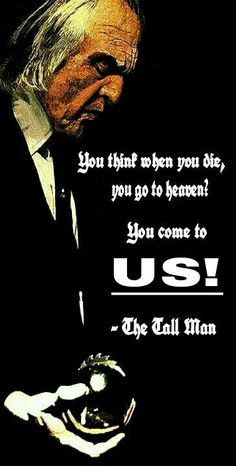 Hands down, without a doubt, one of the best horror movies of all times, and one of the best lines. Not only does it show the Tall Man’s lack of empathy toward anyone living, it shows that he’s a force of a nature himself. He IS death and THAT is what the afterlife looks like. It’s chilling.

1. “When there is no more room in hell, the dead will walk the earth.” – Peter, Dawn of the Dead 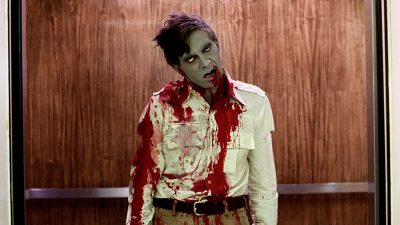 With this bookend of a quote, we have the zeitgeist for all zombie horror movies ever made. In fact, for everything zombie in the history of forever. Why? Because Romero said so. He has the clout as the father of the zombie genre. Voodoo movies aside, of course, because they’re not undead – just under a spell.