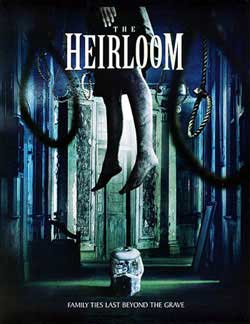 Twenty years ago, an inexplicable mass suicide occurred in the millionaire Yang household, where the entire family hanged themselves at the exact same time. Only one member survived. To this day, the case remains unsolved. Now, a distant relative inherits the house and moves in with his fiancee. Mysterious events begin to disturb their lives and force them to confront the evil within. The demented legacy of the Yang family comes full circle and the curse left behind is reborn.

James Yang (Jason Cheng) is an architect that has been living abroad in England and has inherited an old mansion by his deceased relatives in Taipei. Even though he is urged by others to sell it right from the start, he decides to keep it, and invites his fiancee, Yo (Terri Kwan), to come and live with him there. Yo has some initial misgivings, but soon agrees to move in. Shortly thereafter, in what you can probably guess, strange things start to happen.

Excited about the mansion, James and Yo decide to celebrate with their two friends; Yi-Chen and Liu Tin-Cheng. Almost immediately, Liu and Yi-Chen begin to act strangely after being inside the home. Eventually, Yi-Chen and Yo decide to explore the massive mansion and somehow, just somehow I say, discover the mysterious attic. Once inside the attic, they discover that one of the walls is completely covered by photos of the Yang family. Yi-Chen, who is a reporter, feels compelled to take photos of the pictures of the Yang family.

Freaky things begin happening afterwards. Yi-Chen mysteriously appears in the mansion at midnight with no memory and bizarre things happening to their other friend, Liu. Oddly enough, Liu is eventually found dead in his bathroom, mysteriously hanged by an invisible rope. All I want to know is where can I find some rope like that?

The detective investigating the suicide is soon found dead within the house with his hands completely torn off at the wrist. With the help of Yi-Chen, Yo struggles to uncover the cause of these disturbing events and discovers strange things about the Yang mansion, and her boyfriend’s odd ancestors.

James’ aunt, the only surviving family member, has been locked away in an insane asylum for twenty years, and she reveals to Yo the dark secret of the Yang family. The Yangs’ have been practicing the black art of Hsiao-Guei, raising the ghosts of dead fetuses and feeding them blood for good fortune. And eventually have them decide your fate!

You may or may not be asking yourself at this point, “Scarlett, what do you mean only ONE surviving family member”? Or “Why is James the lucky family member to inherit the massive mansion”? Okay, fellow Asian horror fans, I’ll tell you. Because, a mass suicide by James’ family twenty years earlier, left him as the only one to inherit the family estate (besides the wacko aunt) and now that James is of age, the estate is his. The problem is that he knows nothing of his family’s legacy, of their use of dead fetuses to better the family’s fortune.

Now it’s James’ and Yo’s mission to put the lid on the baby crock pots forever.