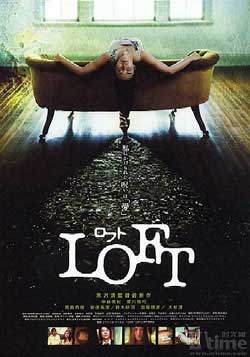 Suffering from writer’s block and some curious ailments, Reiko moves to a countryside home at her editor’s beckoning to quietly work on her next novel. Her new environment turns out to be anything but peaceful though when she sights her next door neighbor, mysteriously moving a thousand-year-old mummified corpse into his university lab for research. Though Reiko and her neighbor get off to a bumpy start, the two grow closer over time, enough so that Reiko eventually agrees to hide the mummy in her home. But the mummy isn’t the only unlikely guest in her walls, as a female ghost also lurks disturbingly in the background. At first seemingly a quick trick of the eye, she grows clearer and more distinct by the day.

The Examination: An amusing supernatural tale, minus the scare.

A classic Kurasawa movie, Loft is mysterious, weird, slow moving, creepy, macabre, and morbid. It’s a convincing and uniquely strange romantic murder mystery, pieced together with ghost and mummy elements of horror, that continually shifts focus between reality and psychosis to keep your interest. It’s amusing, but for die hard horror fans, do not expect scary.

Hatuna Reiko (Miki Nakatani) is a well-known writer that is suffering from writer’s block. She is under contract to write a popular romance novel and chronic stress is making her sick. Reiko is tormented by gut wrenching coughs, and is hacking up gobs of black muck. Nasty! To help Reiko focus on her novel, her editor Kijima Koichi (Hidetoshi Nishijima), who I believe to be a weirdo, sets up Reiko in a two-story rental house in the countryside, with another abandoned house sitting opposite, miles away from civilization. Rummaging through belongings left behind in the new rental, Reiko discovers that the previous occupant, also just so happened to be working on a manuscript, and mysteriously disappeared.

The supposedly abandoned house turns out to be inhabited by a mysterious anthropologist named Yoshioka (Etsushi Toyokawa). One evening, Reiko just happens to catch a glimpse of Yoshioka removing something that resembled a saran-wrapped corpse out of his jeep. Curious, Reiko begins to investigate the supposedly abandoned home and discovers that it is owned by the archaeology department of Sagami University. As any connoisseur of ancient artifacts would have it, it turns out that Yoshioka is a wackadoo conducting experiments on a 1000 year old sexy chick mummy found in the Midori swamp (Ok, leave out the sexy part). I was surprised he wasn’t looking for one of the missing crystal skulls and thus solving the mystery of how to stop the end of the world in 2012, or January 1, 2013. You get the hint.

Reiko gets nosier as to why crackpot Yoshioka wants to hold a 1000 year old mummy hostage. Reiko discovers that this is not the only time a mummy has been taken from the swamp. Finding a mummy expert (Haruhiko Kato), she is shown film footage of a mummy which was rescued from the swamp in 1920. Great creepy footage by the way.

Reiko becomes alarmed when she finds out that in ancestral days, women swallowed mud to preserve their looks and is the main reason why well pickled mummies have been found in swamps. Was this the reason Reiko was coughing up the black, muddy gunk? Or was that, in itself, a hallucination?

Turns out that crackpot Yoshioka has lost all scientific reasoning and is indeed hiding the mummy to protect it from being examined by university students. Sounds like true unadulterated and twisted love. The love you can only find in a necrophilia flick. So it turns out that Yoshioka, being the scientific and logical filled defender of the public that he is, wants to protect the masses from the hypnotic power and deadly attraction that the seductress mummy has on everyone within its reach. One thing leads to another in a somewhat paralyzing pace leading up to an eerie result, but eventually Yoshioka convinces Reiko to hide the mummy in her loft, and as you can imagine, opens the door to flagrant relenting horror. My question is why and the hell would you hide a mummy anywhere? Let alone your house and upon the request of an Indiana Jones reject?

Kurosawa’s knack for getting under your skin and in your mind, as well as, his uncanny ability to create eerie atmospheres are undoubtedly everywhere in this film as it bears his trademark motifs and shooting styles. Although not scary, it is definitely a must see for Kurosawa fans.