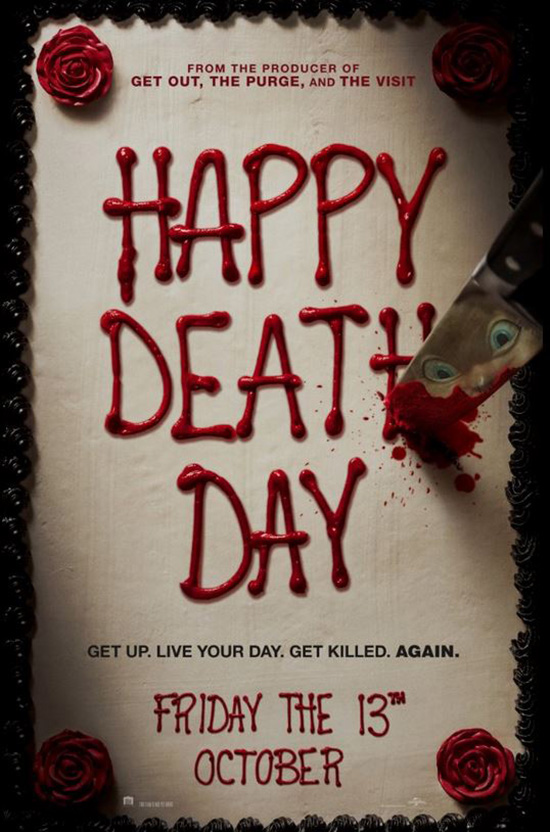 A college student finds herself trapped in a time loop that sees her brutally murdered over and over again every day. Will she be able to find out who her killer is and escape her predicament or is she doomed to relive the experience for the rest of her life?

I know that Happy Death Day has gotten a lot of positive buzz since its release and while I thought that it sounded interesting I was still more than a little skeptical about it before I saw it (what can I say? I’m a pessimist). I finally got the chance to check it out and have to say that I really dug it. Part Groundhog Day and part old school slasher flick, I thought that it was a very fun, original little movie and I had a blast with it. It has a lot going for it and the end results are mighty impressive. I ended up digging it a lot more than I thought that I would and think that it was one of the better horror films to come out of an otherwise rather lackluster 2017.

I thought that the premise was pretty intriguing. We have a rather unlikable character (at first, anyway) named Tree (Jessica Rothe) who goes through life being a bitch to pretty much everyone around her that finds herself stuck reliving the same day (her birthday) over and over again that always ends with her being murdered by some masked maniac in a variety of ways. After she figures out that the only way to escape the ordeal is to correctly identify the person that is killing her we meet a number of potential suspects that may be responsible and the biggest majority of the film is her trying to get to the bottom of the mystery so she can get on with her life.

I had a great time trying to figure out who it was that kept killing her (we get several red herrings) and I think that is part of the reason that I enjoyed the movie so much (sadly though, I guessed wrong and was actually surprised by the killer’s true identity). Needless to say if you liked Groundhog Day and are a fan of old school slasher flicks then you are most likely going to like this movie as much as I did.

I liked the fact that Tree changes during the course of the film. In my opinion the sign of a great fictional character is that the person changes as the film (or book) progresses and that is exactly what happens here. By the end of the film she isn’t exactly the same person anymore as she goes from being a selfish, rude character that pretty much only cares about herself to a better person that the viewers actually care about. You want her to survive and escape the nightmare that she is forced to endure and if you are like me you’ll find yourself rooting for her at a certain point. Of course, it does help that Rothe (who is obviously a talented actor) does a great job in the role and pretty much knocks it out of the park as she transitions from being a snotty, mean-spirited young lady that we don’t care for (and enjoy seeing get killed repeatedly) into a likable one that we just want to see survive and get her happy ending. I think that this is one of the biggest strengths of the film and shows that not only was it well-written and thought out, but that the people behind it got the right person to play the character because she does do an amazing job.

As I said earlier I liked that we had to figure out who is responsible for killing Tree as well. I am a sucker for slasher flicks that have a little mystery thrown into the mix and enjoyed trying to deduce the killer’s identity before Tree did. I was totally wrong and have to admit that I was more than a little surprised by who the killer really was as I just didn’t see it coming. To be honest, it just never dawned on me and even though the character is often visible during the course of the film I never really considered the person to be behind it all (I must be slipping in my old age). While the person’s motive may be just a little silly I still thought that it worked for the most part and that it was a nice touch. I don’t want to give anything about but let me just say that knowing what I know now that the identity of the person is right there in front of you pretty early on and if you pay attention you’ll figure it all out with very little trouble before it is all revealed to you in the end. 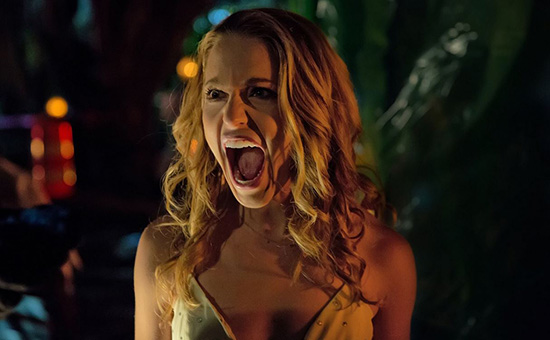 Happy Death Day is a winner in my opinion and I think that a lot of people who give it a shot will agree. It has a little bit of everything to satisfy any horror fan and it doesn’t disappoint by any stretch of the imagination. Writer Scott Lobdell (who has also written several awesome comic books) should be proud of what he has accomplished here and hopefully he will write another equally great horror film in the near future (there is a rumor that a sequel for this movie is in the works and I hope that it is the truth because it would definitely work on a number of levels as we are left with a pretty big unanswered question after everything is said and done). If you are in the mood for a modern horror film done right then do yourself a huge favor and check out Happy Death Day as soon as possible. You won’t be let down.