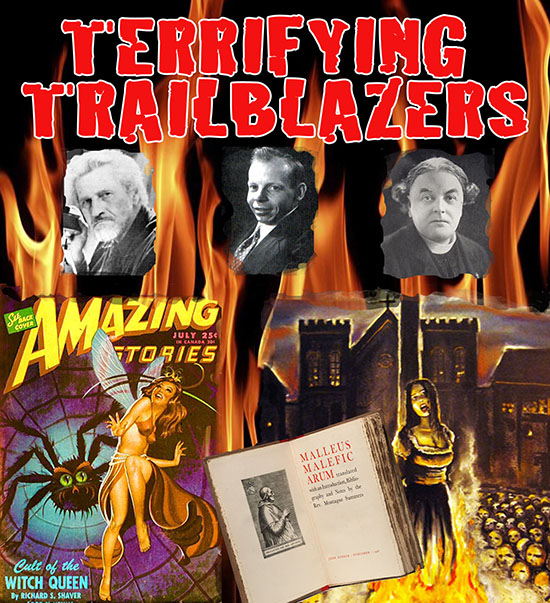 It’s a sad truth that the world’s true innovators are often forgotten by history. When you think of the telescope does the name Hans Lippershey jump to mind? That’s too bad, because he invented it. Does the name Tim Berners-Lee ring a bell? Well you’re using his invention right now— a little thing called the World Wide Web. In 1903 Elizabeth Magie created a board game called The Landlord Game, which someone at Parker Brothers cleverly renamed Monopoly without paying her a dime. Do you love movie heroes who hold a pistol in each hand blazing away like callous idiots? Well a real life Chinese Tong leader named Mock Duck pioneered that bit of hyper violence, allegedly because he was a terrible shot. Alas, all of these geniuses have been lost in the sands of time.

The horror and science fiction genres have their own forgotten innovators that deserve to be household names. Meet Montague Summers, Richard Shaver and Roy Palmer— three overlooked trailblazers of terror who also happened to be genuine eccentrics.

Montague Summers was a British clergyman, author and diehard conservative who did more to document occult history than any other writer. Between 1927 and 1933 Summers traveled the world researching accounts of the paranormal. Using his newfound knowledge he authored such non-fiction works as The History of Witchcraft and Demonology (1926), The Geography of Witchcraft (1927), The Vampire, his Kith and Kin (1928), The Vampire In Europe (1929) and The Werewolf (1933). Virtually every modern book on the paranormal has its roots in Summers work. But unlike many paranormal authors Summers adamantly believed in what he wrote about and was convinced that Post Edwardian Europe was still seething with witches, warlocks, werewolves and vampires.

In 1928 Summers made his biggest literary mark by translating the 15th century Latin text Malleus Maleficarium (The Hammer of Witches)— a literal instruction manual for witch hunters and inquisitors. Summers preface made his personal feelings on witches painfully clear:

“It has been recognized even from the very earliest times, during the first gropings towards the essential conveniences of social decency and social order, that witchcraft is an evil thing, an enemy to light, an ally of the powers of darkness, disruption, and decay.”
He goes on to clarify that witch hunting and burning was a necessary thing, and should still be carried out to this day. Keep in mind this was in 1927, so we are not talking the dark ages. 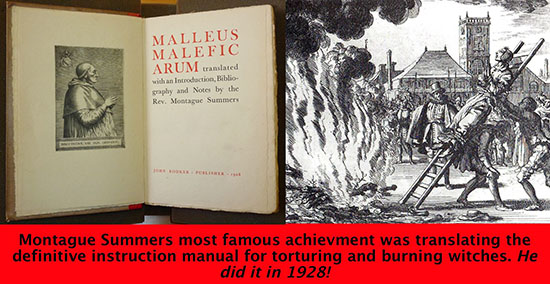 Political correctness was never the author’s main concern, and his choice of acquaintances was as eccentric as his beliefs. Though Summers had many prestigious friends within the church he was also very close to Alistair Crowley, the leader of Black Magick cults who referred to himself as “The Beast”, and was dubbed “The wickedest man in Europe” by the press. Crowley took an occasional break from his daily regime of black masses, sex orgies and cocaine abuse to spend a quiet evening of tea and conversation in Summers’ parlor— one can only imagine what the self proclaimed Anti Christ and the dedicated witch hunter discussed over buttered scones.

Despite his conservative, almost medieval beliefs Summers was also a member of The British Society for the Study of Sex Psychology, which, among other things, campaigned for the legal rights of homosexuals. You have to admire Summers for ignoring social conventions; he was truly his own man.

Despite his occult beliefs and outrageous friends Summers lived an austere, scholarly life. He died in his home in 1948 and his tombstone fittingly bears one of his favorite phrases, “Tell me strange things.”

THE SHAVER MYSTERY – BIRTH OF THE UFO’S

Richard Shaver was an unknown aspiring writer, handyman and, some might say, madman. But he rose to prominence by writing detailed stories of a strange underground world full of demonic creatures and a lost civilization he christened Lemuria. The odd thing is he wrote his stories as non-fiction, believing they were psychic recollections of his past life in this lost world. Eventually over a million readers would be enthralled by Shaver’s tales, but he owes that success to another, equally eccentric man named Ray Palmer.

Ray Palmer was the PT Barnum of the UFO world, virtually inventing flying saucer hysteria from his desk at Amazing Stories magazine. He was a driven man who, from childhood dreamt of being a writer and spent every night pounding out short stories. He submitted his first story ninety-nine times before it was published. That dedication to his solitary craft and his wild imagination stemmed from his horribly lonely childhood. An accident at age seven crushed his spine, leaving Palmer a hunchback who stood only four feet, eight inches tall. But despite being physically frail, he was a human dynamo. After finally being published Palmer never let up and was quickly promoted to editor of Amazing Stories Magazine. Under his guidance that magazine’s circulation shot through the roof. He published many more fantasy and science fiction magazines, eventually ruling the 1940’s pulp magazine market. But his biggest success stemmed from a mysterious letter his magazine staff had initially thrown in the trash.

In 1943 Palmer discovered a letter from an unknown writer named Richard Shaver wherein Shaver disclosed an ancient alphabet that he had discovered and was experimenting with. Palmer was interested, and thought his readers might also find this word puzzle intriguing. He published Shaver’s letter, adding a personal challenge to readers, encouraging them to apply this alphabet to different words. The result was beyond Palmer’s wildest dreams— letters poured into the magazine with readers claiming Shaver had discovered a lost language.

Palmer capitalized on the phenomena, encouraging Shaver to submit more about his allegedly true experiences. Shaver replied with a ten thousand-word letter, which he claimed was a warning to mankind. Palmer took the jumbled, rambling letter and turned it into a long form story entitled I Remember Lemuria– it was pure publishing dynamite.

Shaver continued to share his psychic recollections of satyrs, six armed monsters, aliens and (best of all) the exquisitely beautiful women of Lemuria who spent their free time being bound and whipped by evil robots. Palmer published them as the continuing Shaver Mystery, marking the first time someone’s personal neurosis was cataloged, proofread and resold as literature. It was the forerunner to the array of conjecture labeled as fact books like Chariots of the Gods— though Palmer’s gee-whiz slam-bang prose might have made even Eric Von-Daniken blush. Plus Von-Daniken never had beautiful women being whipped by evil robots.

In 1947 pilot Kenneth Arnold reported the first UFO sighting— a topic that had been a staple of Shaver’s stories. This coincidence wasn’t lost on Palmer who used the publicity from Arnold’s sighting and Shaver’s tales to build an empire of factual UFO and paranormal magazines that remained in circulation for decades. His first creation Fate Magazine, which covered all manner of UFO and paranormal subjects is still published today. Through his unique combination of research, wild speculation and calm disregard for hard facts Palmer crafted a literary world filled with flying saucers, government conspiracies and alien abductions that thrilled readers. Without Palmer’s hard work and vivid imagination flying saucers might never have become part of our modern mythology.

Richard Shaver slipped into obscurity and died in 1975 after struggling with a lifetime of mental illness. Ray Palmer passed away in 1977 leaving behind a legacy of science fiction thrills and paranormal speculation. We owe a lot to this hunchbacked wunderkind.

Richard Shaver and Ray Palmer’s fantasy collaborations have been reprinted and are well worth checking out. Montague Summers achieved every writer’s goal by never going out of print. His works can be found online and in traditional book form. And while you’re book shopping don’t forget to check out Voodoo Child, Book One: Zombie Uprising by yours truly, because every article should end with a shameless plug. 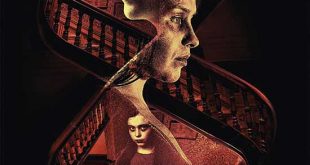 Julia Ormand Stars in REUNION: In Theaters + VOD/Digital on 2/5 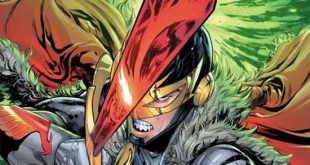