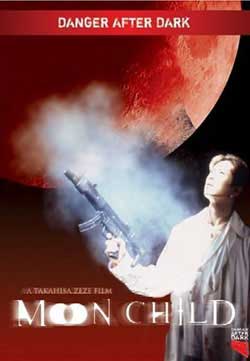 In the year 2014, Japan has collapsed economically and thus its people emigrated in large numbers and settled in other parts of the world. In a corner in Asia, there is a little street called Mallepa, a big melting pot where Asians such as Hongkongers, Taiwanese and Japanese live together. It was a place where people fought for order, food and freedom. It was there where Shou (Gackt), raised as an orphan and Kei (Hyde), who could live forever, met and became the best of friends. However, they were unable to escape from the fight for power involving gangs of different ethnicity on the street of Malepa

Japanese movies are not afraid to mix deep emotions, poetry and gun fire into a vampire film about love and friendship. Nice to see a horror movie that isn’t afraid to but its heart on its sleeve. I fully enjoyed it. The start of the film which was overly arty was slow moving and a bit of a headache but then the story kicked in. The vampires explored in this movie are the sort that don’t enjoy the things that keep them from being human but really the vampire story is more a back drop to a story of love, loss and friendship in a future world that is going to hell. The story takes place in a fictional city called Mallepa which is full of refugees and racial tension. The movie is far more of a “yakuza” movie than a horror movie. Wild gun play amongst the gangs are the main visual effect.

In most ways Kei(Hideto Takarai) the vampire is the same as other characters. He feels love, knows pain and loneliness. He lost his companion at the start of the movie to suicidal and losses his will to live. He regains interest in living when he meets his new friends as boys robbing in the streets. Sho (who will grow into Gackt) pulls him from the sunlight and he returns the favorite by saving the boys Toshi (who grows into Taro Yamamoto) and Shinii ( who grows into Susumu Teraiima) from a gangster. Kei and Sho grow as close as brothers and the relationship is believable which is the core of “Moon Child”.

The vampire spends time with “friends” and feels alive with them but knows they will grow old and die and he will stay the way he is. He wants every moment of real life he can get and has strong feelings for the others in his long life.Of course being a yakuza film it means the poetry is mixed with violence as his friends are small time hoods who rob from other criminals after giving them drugged pizza. On one of their raids they meet Son (Lee-Hom Wang) who is revenging the rape of his sister Yi-Che (Zeny Kwok). Kei and Sho fall in love with her, with her falling in love with the vampire. The love of the two men is more important than the love of a woman which gives us a reason to move the plot along.

Their world comes crashing down when some criminals track them down killing one of them and hunting our vampire as he has been in love and weak from not drinking blood. And then the group separates to come together for the big ending.I often write about the lack of emotional feelings in horror movies but that is not the case with this one, it is a very emotional film and does carry its audience with it. Hideto Takarai does a nice job of conveying his loneliness and is fun to watch in gunfights as he is pretty much bulletproof. I am sure there will be complaints over some of the pop music choices and slowness of some of the scenes but I felt it gave the movie an emotional grounding which made you care what happens to the characters. Think of a John Woo movie with a smaller budget for guns.

What I liked about the movie:
*The scene and visual effects of the first vampire dying in the sun.
It was more beautiful than anything else.

*The last “death” scene on the beach, was handled very well and
didn’t need to be flashy at all.

*The gun fights were nicely handled and what is not to like in Sho’s
long flowing coat as he fires away.

*The fact that the blood drinking wasn’t hammered home but
a secondary thing to the story.

What I didn’t like about the movie:
*The beginning was over arty and it took a while to bring us into the story.

Foreign movies often allow us to explore what isn’t common in our films. I can’t see a movie made in this county that would have vampires as a background but keep the focus on people. I give this movie 4 out of 5 stars. And would happily watch it all night again with or without friends but I would need my popcorn. Please look for the subtitled version and not a dubbed version which just loses some of the poetry. If you like your horror a little different, a little thoughtful, this would be a movie to enjoy.