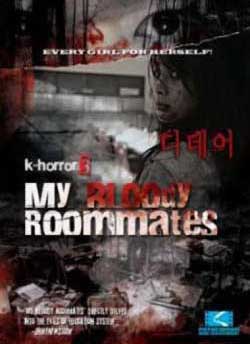 An all girls school for troubled teens. Four roommates must get along or deal with the consequences. One girl doesn’t know if she’s going crazy or having visions of the school burning to the ground. Her roommates are scared of her but want to help her. When these visions get out of control, the girls no longer care about exams, discipline or detention… they’re just concerned about their lives.

A film about Korean school girls at an all-girl academy and the hardships they face in their day to day lives with no boys around….sorry, wrong film. That actually is the basic story of “My Bloody Roommates” but there is nothing sexy going on here. Instead we have a film where the supernatural elements are second fiddle to the intense human drama we see in Kim Eun Kyung’s incredibly strong debut feature.

This film is also known as “D-Day” and is part of the “One Day Suddenly: 4 Horror Tales” film series. The only other film of the series I have seen thus far has been “Hidden Floors” which was a pretty solid entry but “My Bloody Roommates” topped it.

Set in an all girls prep academy, where students are given a full year of devoted pre-college study that is supposed to prep them for the next level and the completion of their entrance exams. The school is run like a prison. No outside interference is allowed, cell phones, junk food, earings, etc. are all disposed of. They are given a stick regimen that they must stick to, day in and day out, otherwise face the consequences of their superiors.

Four girls are assigned to room together and although they each have different personalities, friendships begin to grow. As the pressure of their classes and studying begins to take over their lives, they each begin to unravel, and friendships are tested. And to make the prison-like atmosphere they live in even worse, it appears to be haunted.

The meat of the film lies in the human story elements. The supernatural elements are almost not needed here. A sub story about a fire that happened several years before, the girls have visions of bodies and other girls are possibly driving them crazy, or is it the strictness of the system? From what I understand, Koreans are obsessed with their entrance exams, they refer to exam day as “D-Day”.

It is so important that it is almost treated like a holiday and pressure runs high since students feel that the rest of their lives will be set in motion based on their scores. You get that feeling while watching the film. We are shown their day to day routines, the times are all shown on screen so the viewer gets an idea at how strict and regulated it is. Their days are planned to the minute and if they have to use the bathroom, they are physically punished. The four leads were so believable that you couldn’t help but feel their frustration, stress, and pain.

I really hate to say it, this is supposed to be a horror film, but I really do feel that the ghost story did not even need to be here. I was most intrigued by how the pressure took its toll on the girls than the mystery, that really wasn’t a mystery at all. We see how the girls, when their test scores drop, are humiliated and tortured into trying harder the next time. The school heads try to cover up what they had done in the past but the ghosts make themselves known to the girls who begin to piece things together as their world begins to fall apart. This is a really strong film, I just feel that the human horror was what makes this one worth watching, not the ghost story part.

“My Bloody Roommates” wasn’t anything like I was expecting it to be. I was picturing something along the lines of the “Whispering Corridors” films but it wasn’t, even though it tried. There was no need for that since there was some stellar acting and solid story that made the film work. Director Kim creates such a tense and disturbing atmosphere, without the haunting, that I really don’t remember much about that subplot, and can’t stop wondering to myself how realistic the intense studying for the entrance exam is in Korea. If it is half as disciplined as is shown in the film, then that would be frightening!