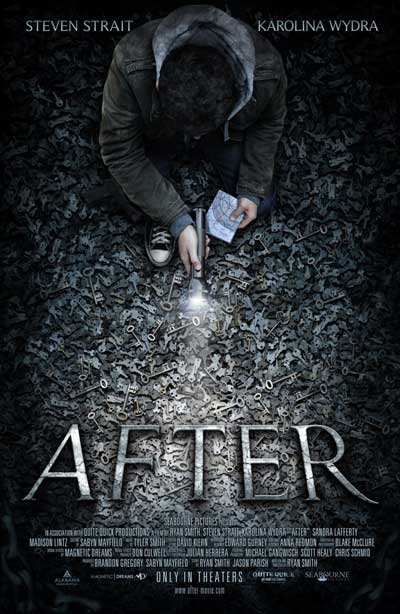 A woman on a bus endures a man invading her personal space while she’s trying to write so he can ask her out. Thankfully, to end the awkwardness of the exchange, their bus crashes. They awake in the city of Pearl to discover that time has passed and they are all alone.

Since 2000, there have been a slew of horror films desperate to convincingly get across that they are to be taken serious. The creators think their ideas so high-minded they don’t to be lumped into the broader category alongside the pedestrian Freddy’s and Jason. They attempt to achieve this not by content, not by tackling a grounded matter, they attempt to convince the audience of their worth by how depressingly grey the entire palette of the film is.

A phenomenon that may have found its introduction into American pop culture with ‘the Ring.’ ‘After’ takes itself as seriously as the many different shades of grey it presents. It fails, mostly due to it’s lack of pacing, but certainly not helped by shoddy script which fluctuates in character tone, one moment being a study in loss and loneliness, the next shoving twists down throats to distract from the phoned in performances. Often, it feels less like a movie and more like being on a hurtling train and trying to identify the foliage rushing by.

The film is surprisingly straightforward, answering the questions it sets up only a scene or two later. This approach gives a definite ease of viewing, it’s stocked with momentum from the first scene. Making sure not to leave any dangling threads in the viewers mind, it also continuously undercuts its own dramatic tension. The answers come too easily, solutions are found with a fair amount of convenience.

Two people find themselves alone on a bus traveling through the night. The man, Freddy, played by Steven Strait, approaches Karolina Wydra, as Anna. Small talk ensues, the man pries into learning that they live on the same street in the same city. For future reference, it’s best not to release any specifics about one’s life to the strange intrusive man on an overnight bus.
The vehicle crashes, fade to black, and Anna wakes up sometime later in her own bed seemingly no worse for wear.

Upon going to her job in a hospital she realizes there is no one else around. Searching the town confirms this suspicion, Anna is all alone.

Sometime later she hears music being played in the distance, and its Freddy. They’re the only two people in the town, and not believing this is a coincidence, wonder if they may be perhaps dead. Which is quite a realistic question to ask, since so many movies do exist within the genre of, “They were dead the whole time.” It’s interesting they’d draw attention to it, but this movie has no relationship with subtlety.

The next part of their plan is to leave town. However, blocking their way is a massive wall of black fog. It’s surrounding the town and through some rather complicated math done quickly, they surmise they have 3 days before the fog envelopes them.

As the speed of the plot picks up non sequitur flashbacks or time travel I guess it could be referred to bits and pieces of the two leads in their childhood. These moments of humanization bring the film to a dead halt every time one starts, with seemingly little emotional payoff.

Where any film dealing with the realities of an afterlife needs to excel is showing the inner life of a character, to invest in their fate. Otherwise the potential end of it seems shallow. The two characters here are simply not strongly presented with enough depth to make the character moments stop from falling flat. It’s an admirable try and there are attempts at heavy lifting in the performances, but in the end nothing is achieved.

The third act plays less like a character study and more like a creature feature. One in which the creature looks a lot like an eyeless sharp toothed Ninja Turtle. The end even contains a trite, “If we don’t make it out of here…” bit of dialogue to add to the already lazy script.

The After, while being inoffensive and very watchable, has nothing that could be described as truth contained within. It’s perfect for shallow watching, a Saturday afternoon folding laundry kind of film. Answers about life and death it doesn’t have; the best that can be hoped for are some tips on picking up girls on buses.