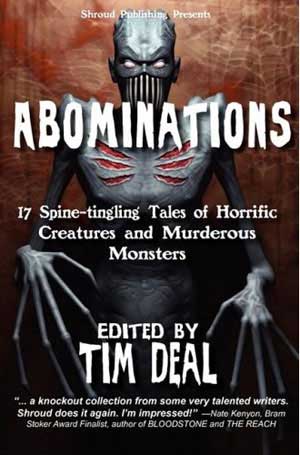 I miss monsters in horror. Not evil people doing screwed up meany-guy or -girl stuff, but gigantic goopy masses of sludge slouching their way into my safe little town. Yes, realistic horror is more frightening and certainly more disturbing but I also like to escape via my horror sometimes. Unfortunately, they seem to have gone the way of the dodo in most horror, shuffled aside in favor of those horrid beasties that live next door. Personally, I even shy away from counting zombies as true monsters since, as the maestro said himself, they’re us. But wait… like a shiny star in the east comes a new anthology from Tim Deal’s Shroud Publishing centered entirely around the things that go slurp in the night.

Feel like some giant bugs? Got em. Angry, hunched, moss covered mutants? Right here. Bridge trolls, ghost dogs, crazy black eyed freaks? All present and accounted for. There are even a couple werewolf tales and an honest and for true Sphinx along with aging woodland deities and some lively garden decorations. This damn thing is crawling with the great unknown and I couldn’t be happier. Even the zombie one manages to be pretty novel in a time where the moaning masses have been run into the ground.

A quick look at some of the gems displayed here: Gerard Huoarner continues his love of ancient mythologies in “Devoured by Her Enigmatic Smile” a story whose title alone kinda gave me wood. Here he uses the previously mentioned Egyptian creature to weave a tale of emotional emptiness and wasted life that gives a whole new view of identity theft. Mark Tullins’ “When it Rains” stands as a marvelous allegory of everything that went wrong with our country’s response to issues in the Middle East, awash as we are (just like many of his characters) in paranoia and arrogance. With “Worm-Sacks and Dirt-Backs,” Lee Zumpe twists the Zombie tale into a Shatter Dead-esque exploration of manipulation. Jeff Parish gets playful with our misgivings toward the Catholic church while attacking the repression of the clergy and Anna Lowther delivers a traditional morality play straight out of The Twilight Zone in the form of “Grace’s Garden”. But the real kicker comes in the last story: Brandon Berntson’s “Mosquito”. For being only twenty-ish pages, this work shows a remarkable amount of depth and an amazing talent for f*cking with the audience. I giggled, wept, gagged a little and cheered a bit more during what seems on the surface to be a story about killer mosquitoes but ends up being about much more. We really need to see more work from this guy.

Unfortunately, there are some missteps. I personally believe that a good short story should be self-contained and I cannot stand to read one that is obviously supposed to be the set-up for a novel. Both Richard Farnsworths’ “B.E.K.s” and Tracie Mcbride’s “Marked” reeked of this, having no story of their own so much as a setting the stage for a larger one. Also, as good as it is (and it is quite good), I don’t feel that McCoy’s “Good Dog” belongs in this anthology, as more of a tale of straight-forward human evil. However, those little stumbles did nothing to fowl up the overall quality of the whole book. Hell, if Farnsworth and McBride ever get around to kicking out full length versions, I’ll buy em in a second.

At the end of the day, anthologies live and die by the taste of the editor and Tim Deal is continuing the promise he’s shown with Shroud magazine here, not only showcasing some fine talent but also displaying a wide breadth of styles and (dare I say it?) emotional pallets. Buy this and you’ll get the added pleasure of seeing the great and mighty Dagon get humiliated by a little girl in Kevin Lucia’s “The Water God of Clarke Street”.

As a short aside, you writers out there might find it interesting to see that Shroud returns the copyrights of the material to the original holders immediately upon publishing. That’s pretty damn kick-ass of Timmy.