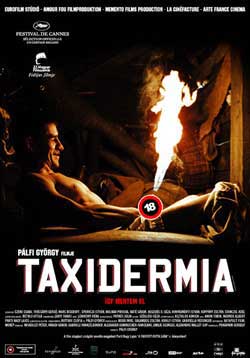 A journey through three generations of men in a very twisted family. Did I mention that one of the members of the family is a taxidermist, or how about the one who is a champion eater. What about the grandfather who has the uncanny ability to shoot fire out of his penis? This is a very strange journey indeed.

Gyorgy Palfi’s Taxidermia is a strange viewing experience indeed, even after watching it I am still confused as to what exactly I saw. I do however know that I did see a beautiful film, the sets and the use of the camera and color is really top notch. Even when showing some very twisted things on the screen Gyorgy Palfi still manages to make it look very beautiful.

Taxidermia follows the story of three generations of men, of course starting first with the grandfather Vendel. Vendel is in the military and serves at an outpost with only his superior and a few other ladies around. Vendel is seen after the credits with a candle; almost passionately attempting to kiss its flame he lets the heat touch each part of his body until we are rewarded with a shot of him shooting fire out of his erect penis. Director Gyorgy Palfi doesn’t hide anatomy at all in his film, so one should be warned from the first few minutes that even though sex organs are taboo, he intends to show them on the screen.

Gyorgy Palfi doesn’t wait to long to start showing off some of his camera work. The scenes with Vendel are littered with various beautiful things for the viewer to enjoy. Among these shots is a wonderful shot involving a bathtub, Palfi circles the bathtub 360 degrees several times to show all of its uses in the household. The said bathtub is used for everything from bathing to slaughtering a pig and even eventually used as a babies cradle. There is also a wonderfully filmed sequence involving one of Vendel’s masturbatory fantasies (I never thought I would type a sentence like that), in the scene Vendel opens up a pop up children’s book and then finds himself and a young girl inside the wonderful reproduced pages only to then show him ejaculate up into the stars (I realize this doesn’t sound great, but when you watch the scene there is a twisted form of a beauty to it).

Vendel finally gets to stop masturbating long enough to enjoy a very quick romp with his superior’s woman. During the scene Palfi gets rather risqué with his camera work as penetration is shown, so again you are warned. Of course the next morning his superior arrives and sees what has occurred and with a quick fire of his pistol Vendel is shot in the back of the head and killed. A few scenes later a baby is born, of course it is the Vendels son, and there however is something strange about the infant. The infant has a rather protruding tail that is quickly snipped off by his surrogate father in a great wince inducing sequence.

The movie now flashes forward several years and the baby that was born with a tail is now an adult by the name of Kalman. Kalman is a speed eater of championship proportions; this however isn’t the hotdog eating competitions you see on ESPN. The men are spooning a rather nasty looking soup into their mouths as a woman in the crowd cheers them on. Kalman is of course attracted to the woman and it affects his eating, therefore putting him into second place for the first round of competition. Kalman’s coach of course starts to give him a pep talk before the second round of competition then sends him back out. While all of this is going on we of course get a wonderfully grotesque shot of the competitors throwing up the food that they just ingested, even then it is still filmed beautifully.

Once again once the men start to eat the woman in the crowd starts to cheer again, by the way her name is Gizi. Kalman is so side tracked that he freezes up and collapses on the stage. The next few scenes involve a love triangle of epic proportions as Gizi leaves Kalman for his best mate, and fellow competitor, even leaving him at his wedding resulting in Kalman singing a song to his family who sits there wondering what exactly is going on, probably the same face that the viewer is making. The grandfather and father segments of the film are almost a black comedy, but by the time we get to the third act involving the youngest member of the family the film suddenly thrust into the horror genre.

We are then of course brought onto the youngest member of the family, his name is Lajos. Lajos cares after his now extremely overweight father; Gizi has of course left and now coaches younger champion food eaters. Lajos looks creepy, he is tall and his hair is thin and he is rather gaunt; he seems to spend a lot of time at the grocery store trying to casually flirt with the clerk before he goes back home to his father. Lajos’s father of course has now raised three friggin mutant giant cats. These said cats are kept in a caged area, and even Lajos uses a large cattle prod like instrument when he enters the house in order to deal with them. I will not spoil the ending of the film for you; I will however state that one does need a strong stomach to make it through the last twenty minutes of the film. Once the last scene plays out though it does stay in your mind for quite some time after the movie is over.

American gross out films seem to take the route of excessive violence (see the Hostel and Saw franchises). While Taxidermia does have its share of gore, I mean the movie is called Taxidermia you know you are going to get to see some of the red stuff; Taxidermia however relies on the gross out factor of each of these three men “stuff” something. Vendel stuffs his penis into whatever he can, Kalman stuffs his face and Lajos stuffs carcasses, it is a family of men whose soul goal in life is to stuff things. Director Gyorgy Palfi has created a beautiful movie, about not so beautiful things. The movie is pure eye candy and I do recommend it to anyone who is looking for something a little strange. Strange is the right word to describe it though, going into Taxidermia you might have an idea about what you are going to see, those ideas however are quickly removed by the time the last frame plays. Taxidermia is a movie that will stick with you long after you finish watching it.