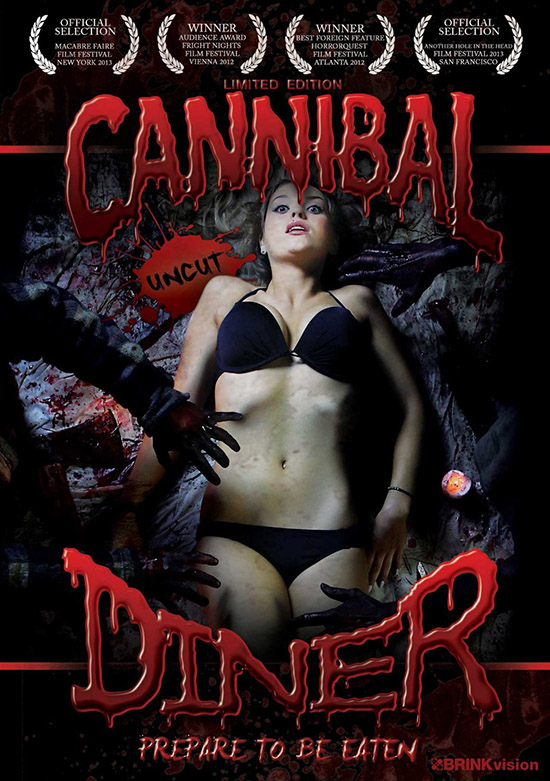 A group of models find themselves trapped in a factory inhabited by a cannibalistic degenerated family.

To say that Cannibal Diner is like a German-made Wrong Turn is not entirely accurate, but it does start the conversation off on the right foot. It could also be compared to Texas Chainsaw Massacre, or The Hills Have Eyes, its German counterpart, Tortura, or even the recent Killbillies. That is to say, Cannibal Diner falls into the corner of the horror movie universe where people go out to the middle of nowhere and get chased and/or attacked by the deformed, inbred, or otherwise deranged psychopaths that have taken residence there. Yeah, there are a ton of these movies, but as long as the new ones add in a few unique aspects, we’ll keep on watching. We’re afraid of being lost in the middle of nowhere, we’re afraid of the unknown, and, like it or not, many of us are afraid that people who are not like us are dangerous. 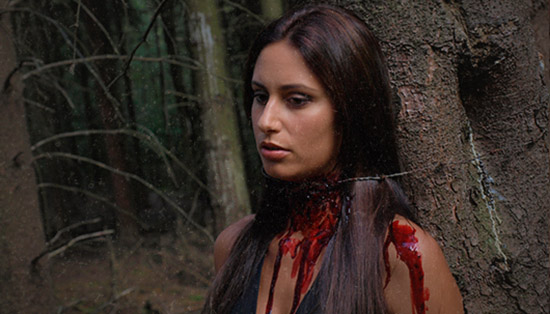 These movies are able to play off of all three of those fears at the same time, and the good ones leave an impression – remember how many people swore off going camping after The Blair Witch Project?

Director Frank W. Montag (he also directed Slasher) and writer Mario Von Czapiewski (he’s also worked in casting and music for a few Marcel Walz films) bring us the story of some girls meeting up for camping and celebrating a friend’s birthday.

We open with a handful of models getting to the party spot early, which of course leads to some pre-game drinking, which then leads to lines of coke and shirts coming off and, inevitably, some making out. Just your everyday campground birthday party. In the blink of an eye, the party becomes a game of survival, as an off-screen assailant attacks, chases, and catches the girls. Let’s hope whoever else is on their way has better luck…but this isn’t our first time being stuck in the middle of nowhere, so we know they won’t.

After the first few characters prove to be little more than plot devices, we meet Kati (Alexandra Lesch), Celine (the birthday girl, played by Laura Baum), and Tanja (Kristiana Rohder, aka Miss Universe Germany, 2010). While Tanja and Celine are already on their way to the party on an ATV, Kati had to shower during the opening credits and is running behind. Then she gets lost and asks a drunk woman stumbling out of the woods for directions. She turns out more Crazy Ralph then Carmen Sandiego, warning Kati about the nearby restricted area, a factory where an accident made people crazy. Of course, Kati’s car is stolen during the chat, so she has to walk into the woods all alone, and she comes across, you guessed it, an old abandoned factory complex. People are watching her, but when she hears a phone ring inside, she decides it’s a good idea to break in.

The pros and cons lists for Cannibal Diner end up fairly even. The “villains” in this film are peculiar, a handful of otherwise normal folks who happen to grunt more than speak, like the taste of human flesh, and are covered in dirt/oil/soot/something black. For being a low budget horror film, for the most part it looks pretty good – it doesn’t have the same amateurish shot on video feel that many of the German splatter films have (not that this is necessarily a bad thing). The acting is passable, nothing really special or outstandingly bad. And remember, the main characters are models, so get ready for quite a bit of male gaze POV on their sweaty, blood-covered bodies.

The blood and gore here is well done, featuring assorted severed body parts, heads smashed open, steel rods through eyeballs, and the like. The settings, first the lively green forest, and later the run down, abandoned factory, really stand out as well scouted and arranged. Unfortunately, while there are a handful of unique aspects in this story, there are also some familiar rehashed scenes as well. Of course there is a Texas Chainsaw Massacre-style dinner scene, why wouldn’t there be?

There’s also the Leatherface finale dance, here performed by a hulking guy with an ax (he had a chainsaw earlier, but thankfully lost that before delivering his homage to the legend). And, in the tradition of The Descent and Silence of the Lambs, among others, there is a tense, pitch black sequence where our protagonist has only the night-vision feature of her video camera to guide her along. And then there are the mysteries: Why are the people covered in black? Why does the camera keep panning up toward the treetops, as if foreshadowing someone being up there? And why is this movie called Cannibal Diner?

Cannibal Diner is by no means a bad or boring film. There are enough familiar tropes provided to let us know what we’re getting ourselves into, and there’s enough “unknown” to keep us through to the end of the film (the movie is only 75 minutes long). In the wide world of German horror films, this one falls somewhere in the middle of the pack. Not the most original story, but it looks good, and there are English subtitles, and while it might not scare you out of your seat, it provides enough entertainment to leave the average horror fan feeling content.