Horrornews.net and Entertainment Earth join forces once again to bring you a STAR WARS Top 10 List of NEW cool toys that span the Star Wars Universe!  Rebel or Empire, Force or Dark Side, their is something for every Star Wars fan on this new list.

Since 1977, fans the world over have been after Star Wars toys, action figures, and replicas. Today, dozens of companies like Gentle Giant and Hasbro make thousands of items, and Entertainment Earth is proud to bring you the absolute best of them from all over the globe!

Star Wars is an epic space opera franchise initially developed by George Lucas during the 1970s and significantly expanded since then. The first film was released on May 25, 1977 by 20th Century Fox and became a worldwide pop-culture phenomenon, spawning multiple sequels and TV series. 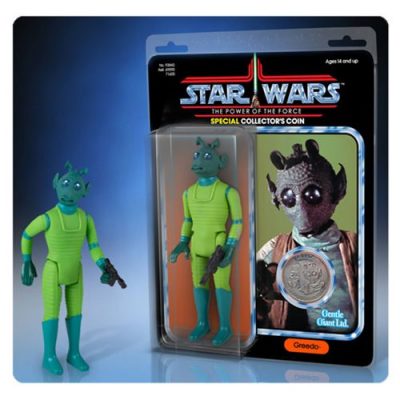 10. Star Wars Greedo Jumbo Vintage POTF Action Figure:
Gentle Giant continues on with their hugely collectible line of vintage Star Wars action figure reproductions with the Star Wars Greedo Jumbo Vintage The Power of the Force Kenner Action Figure! Though prototyped and photographed by Kenner in 1985, the line was subsequently canceled. Over 30 years later, collectors finally have a chance to add an accurate example the early 80’s Greedo to their collection – it’s just bigger now. Digitally scanned from mint 3 3/4-inch Kenner originals and reproduced in scale to the rest of the jumbo figure line. Nothing has been overlooked. Roto and injection molded and made of durable plastics, this fully-articulated jumbo figure includes a faithfully reproduced Blaster and monochromatic, color-matched lime green jumpsuit, just like you remember. That’s not all, this classic Kenner creation comes packaged on a re-sealable1984/85 The Power of the Force-inspired blister card, with original photography, artwork and featuring a replica 3-inch metal The Power of The Force collector coin. 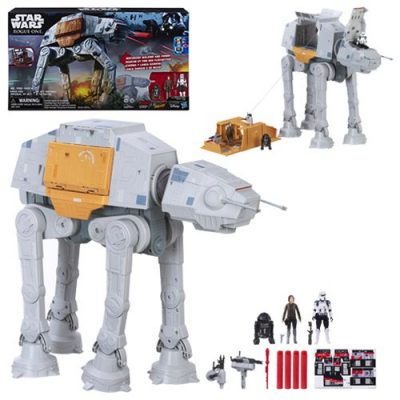 Rebels, beware! The AT-ACT is here!
Take control of this gigantic vehicle with your smartphone!
The menacing AC-ACT from Rogue One: A Star Wars Story fires projectiles!
Includes 3 unique action figures: C2-B5, Jyn Erso, and an Imperial AT-ACT driver.
The removable cargo bay becomes a playset!

Take control of this gigantic All Terrain Armored Cargo Transport with your smartphone and recreate the biggest battles and missions in the Star Wars saga with the Star Wars Rogue One Rapid Fire Imperial AT-ACT Vehicle! The menacing AC-ACT from Rogue One: A Star Wars Story fires projectiles, includes three 3 3/4-inch action figures – C2-B5, Jyn Erso, and an Imperial AT-ACT driver – and features a removable cargo bay that becomes a playset. It doesn’t get any better than this! Includes 1 vehicle, 3 figures, 1 accessory, 4 projectiles, and instructions.

This towering movie-inspired, app-controlled vehicle converts into an action-packed playset so kids can create their own Star Wars adventures. Also included are 3 unique 3 3/4-inch figures from the film so fans can imagine sending their favorite heroes and villains into the intergalactic fray. Droid C2-B5, an Imperial AT-ACT driver, and Sergeant Jyn Erso battle for control of this amazing war machine. No Star Wars collection is complete without this Star Wars Rogue One Rapid Fire Imperial AT-ACT Vehicle! Requires 4x “D” batteries, not included. Measures approximately 18-inches tall when fully assembled. Ages 4 and up. 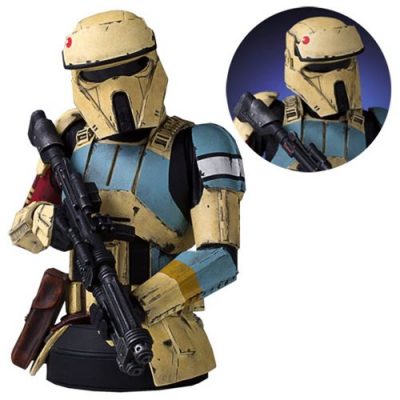 8. Star Wars Scarif Stormtrooper Mini Bust:
From Rogue One: A Star Wars Story comes the Empire’s Shore Troopers. Armored soldiers who patrol the beaches of the planet Scarif, the secret location of the imperial army and its Death Star construction facility. These well-trained, specialist shark troopers are at the ready to defend against the always imminent Rebel incursions. Sculpted digitally to ensure precision form and character correct accuracy. The Star Wars Scarif Stormtrooper Yellow Mini Bust is cast in durable, stone-like, poly-urethane material that is cold to the touch. Featuring a heavy blaster-rifle, sculpted hip pouches and gear. Every trooper is hand-painted with the correct rank and insignia applications with battle worn, weathered details. 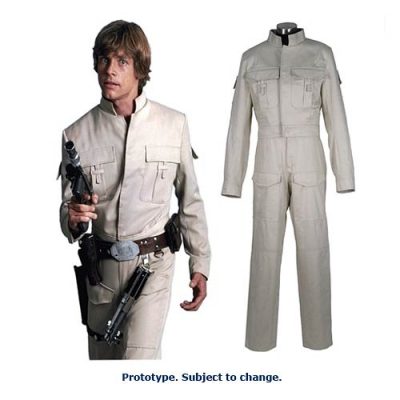 Use the fatigues, Luke.
You too can wear Luke Skywalker’s signature Bespin battle fatigues!
From Star Wars: Episode V – The Empire Strikes Back.
Created using patterns and colors taken from the original screen-used prop!

The main costume of our hero in Star Wars: Episode V – The Empire Strikes Back, Star Wars Luke Skywalker Bespin Battle Fatigues is a uniform piece Anovos is proud to offer. Extensive measurements, digital Pantone color samples, and physical patterns were taken directly off the original screen-used outfit, one of the few costumes from the movie still residing in archives. Every detail possible has been recreated, from the convex bends of the lapels to stitch-for-stitch specific collar detailing. These details and more come together to create the most accurate replica of a Luke Skywalker’s Bespin fatigues ever offered by a licensed entity!

Pieces utilize replicated poly-cotton twill fabric, the same material as used on the original. The fabric is custom dyed to exacting color, using digitally matched Pantone, and the pockets are matched to originals in size and scale to the original uniform. 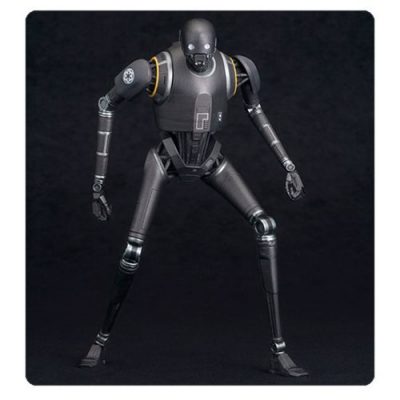 Don’t be alarmed, it’s K-2SO!
The reprogrammed Imperial security droid looks like he just stepped off the big screen!
1:10 scale ArtFX+ statue based on Rogue One: A Star Wars Story.
K-2SO has magnets in his feet for extra stability on the included base.

Kotobukiya’s lineup of 1:10 scale ARTFX+ statues is expanding right alongside the Star Wars movie universe, as evidenced by this fantastic Star Wars Rogue One K-2SO ArtFX+ Statue based on Rogue One: A Star Wars Story. First up from Rogue One is none other than towering security droid K-2SO, beautifully sculpted with all details in place. Why, K-2SO looks like he just stepped off the big screen! The statue has magnets in his feet for extra stability on the included base.

As the Star Wars movie universe expands beyond the Skywalker saga with Rogue One: A Star Wars Story, K-2SO is an alarming sight standing within a secret Rebel base. But K-2SO is actually a reprogrammed Imperial security droid now loyal to the Alliance! The pragmatic droid is an effective insertion agent, as he can blend in perfectly at Imperial installations and outposts. 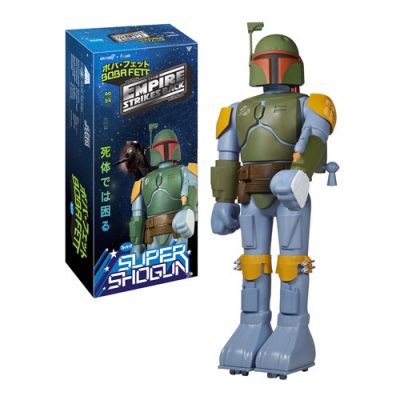 5. Star Wars Boba Fett Empire Strikes Back Ver. Shogun Figure:
Travel back in time to an age when toys had missile firing gauntlets and leg rollers, but no batteries were required! The Star Wars Boba Fett Empire Strikes Back Version 24-Inch Shogun Vinyl Figure not only has a missile firing gauntlet, but a missile firing jetpack and a movable rangefinder. His head and arms are articulated and he features rollers in his feet so you can move the Madalorian into battle. No batteries required 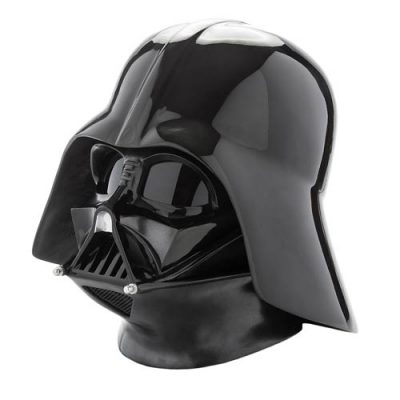 Add to your impressive Star Wars prop replica collection with this amazing version of Darth Vader’s helmet! Utilizing the best features of the various helmets made from the classic Star Wars trilogy, this Star Wars Darth Vader Standard Helmet Prop Replica features faithful detailing, with the two-tone paint scheme from Star Wars: Episode V – The Empire Strikes Back. The helmet has been made from fiberglass construction, and includes “reveal” style greebles and “vents” on the upper forehead of the facemask, which are hidden by the dome when worn. Turned-aluminum tusks and bubble lenses continue the authentic look, while the helmet dome locks into the faceplate via an exacting magnetic and keyed locking mechanism that makes for perfect alignment every time. Complete with adjustable helmet / suspension rig that fits a wide variety of head sizes, the helmet is one-size-fits-all and even features a lined, breathable inside mesh for the helmet wearer’s comfort. Helmet can accommodate up to hat size 8, or a 24-inch circumference. 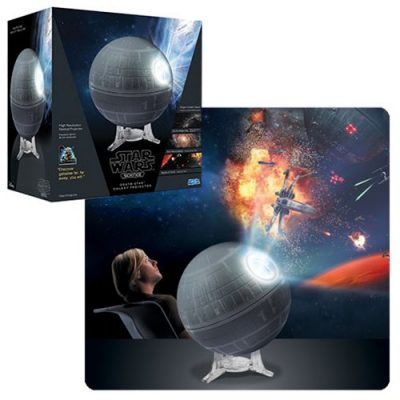 3. Star Wars Death Star Galaxy Projector:
Experience the Star Wars galaxy and Earth’s night sky up close as they come to life with the Star Wars Death Star Galaxy Projector! Project over 10,000 stars with brilliant clarity onto your ceiling, view all the planets from the Star Wars Galaxy. You will love watching your ceiling transform into an incredible scene from the famous Battle of Yavin! The high resolution optical projector has an authentic Death Star design and features ultra bright LED light, automatic image rotation, adjustable projection angle, and auto shut-off. Includes long USB Cable. All ages. 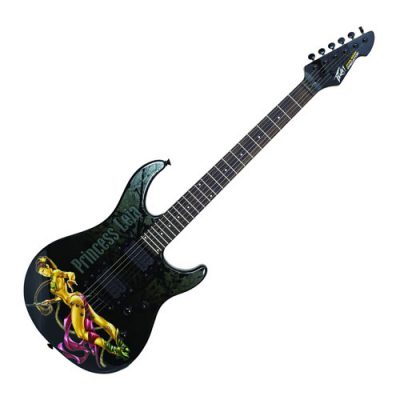 Featuring a super-sexy Princess Leia image inspired by her stint as Jabba’s slave in Star Wars: Episode VI – Return of the Jedi, this fantastic Star Wars Slave Leia Predator Guitar from the masters at Peavey Electronics is perfect for fans and musicians!

Peavey Electronics’ Predator Plus EXP Stop-Tail electric guitar is a string-through-body version of Peavey’s popular electric guitar. It features a multi-adjustable bridge with a string-through-body design and a slightly longer upper cutaway than most double cutaway guitars, giving it a clean design and opening up access to the upper fretboard. The Predator includes two Peavey USA-designed humbucking pickups, a three-way toggle switch, master volume, and a master tone control with a coil tap that changes both pickups from humbuckers to single coils. It also features sealed die-cast tuners (15-1 gear ratio), a solid basswood body, and a dual-action torsion rod. 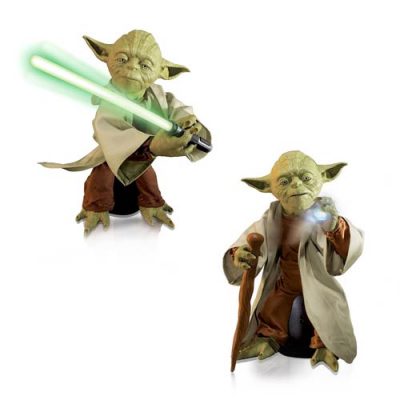 WARRIOR MODE: Learn from the greatest warrior of all time as Yoda swings his signature green light-up lightsaber! Seven motors power his breakthrough 360-degree, lifelike movement. You can send him on the attack, or follow along with his advanced lightsaber techniques as he guides you on the path to Jedi Mastery.

FORCE MODE: Learn the ways of the Force as Yoda unleashes iconic quotes from the Jedi Order. When the dark side threatens, Yoda’s hand lights up with a glowing “Force blast!” Learn to Force push and send Yoda flying back.

WISDOM MODE: While holding his cane, Yoda answers your questions and senses whether you’re strong in the force… or the dark side. His voice recognition has six key phrases and he will answer yes or no questions revealing his secrets and wisdom. As the wisest Jedi of all time, Yoda is equipped with a dark side sensor to determine if your intentions are good or evil!

Legendary Yoda is an authentic collectible with highly detailed premium latex skin. Wearing a real fabric robe and wielding his light-up lightsaber, this fully interactive Jedi Master brings all the wisdom and power of the Jedi Order right into your room. “Do, or do not. There is no try.” Train to become a Jedi with the incredible Legendary Yoda! Requires 6x “C/LR14 1.5V” batteries (not included). Ages 6 years and up.