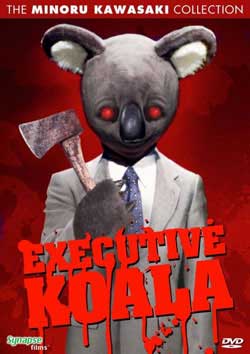 AVAILABLE FOR THE FIRST TIME IN THE U.S., MINORU KAWASAKI S FOLLOW-UP TO CALAMARI WRESTLER, A CULT CLASSIC PSY-KOALA HORROR / COMEDY! Tamura is an average Japanese salaryman working in the offices of a pickle distribution company. He is well liked in the office, hard-working, polite, wears a suit and tie, and also happens to be a six-foot tall koala bear. But when his girlfriend Yoko turns up dead one day and Tamura is the chief suspect, he is forced to enlist the help of his boss (a white rabbit) and a friendly convenience store attendant (a frog) in order to prove his innocence. A psychological thriller wrapped up in the packaging of a nonsense comedy with giant animals EXECUTIVE KOALA is like nothing America has ever produced…which is why it was made in Japan! SPECIAL FEATURES: Anamorphic (1.85:1) Widescreen Transfer – Japanese Dolby Digital 2.0 Stereo – Newly-Translated, Removable English Subtitles – Making Of Featurette – Theatrical Trailer and TV Spot .

This is for my evil friend and I will burn everything for them….But first a review about the Japanese film titled EXECUTIVE KOALA. I saw a photo of the actual EXECUTIVE KOALA in a issue of FANGORIA and I thought this koala man in a suit looked a bit ominous and it made me wonder a little about what this flick was about. Then Mikey of HorrorNews.net sent it to me for review. Boy, I AM a lucky little monkey! But I gotta tell ya straight up and straight forward that EXECUTIVE KOALA falls into the realms of comedy and could even be considered a horror spoof but it is not a horror movie. But in the case of EXECUTIVE KOALA I can let go of the fact that it is not a horror movie because it was pretty darn entertaining!

The movie is about a man sized Koala named Tamura who is a executive in a Japanese business. He is hardworking and the boss of his own group and everyone seems to like him and no one ever seems to question the fact that he is a giant koala that talks and wears a suit and it just seems to be accepted by almost everyone. I liked this aspect about the movie. I had no problem accepting this. Suspension of disbelief is important when you are a genre movie fan, especially in horror, but if people have no problem with all the crazy unbelievable sh*t in movies like LIVE FREE OR DIE HARD, BAD BOYS 2, and THE FAST AND THE FURIOUS a little detail like a giant talking koala should not bother anyone.

So….Tamura is a executive with a bright future, he is good at his job and has a loving girlfriend he cares about but he does have a darkened past and the future is about to take a turn for the worse. The police show up at his work and inform him that his gal Yoko was murdered the night before and it is obvious they think Tamura did it. Seems he had a wife, Yukari, who disappeared a year or so before and tamura can’t remember what happened to his wife. He is also going to a psychiatrist to try to get his memories back of what really happened to Yukari. But all these heavy thematic elements are shown in a lighthearted comedic and and the absurdness of a giant koala dealing with all these serious problems is kind of hard to take very seriously.
One thing I wondered about EXECUTIVE KOALA was if Tamura would be the only anthropomorphic creature in the movie and fortunately he’s not! Tamuras boss is a man sized white rabbit and this is one creepy looking bunny! He looks like he is a killer rabbit! The third man beast is a frog man who works at a convenience store Tamura goes to. All three costumes straddle the line of being cheap and funny but also look strange and creepy.

WHAT COULD HAVE BEEN:
EXEXCUTIVE KOALA is not gory at all. As usual this is my biggest complaint with every movie. There are more than a few murders but they are not shown in graphic detail and the most blood they show is splashed up against a wall and it looks like they use the same shots of splattering blood more than once. Alot of nasty gore and disgusting behavior would of made EXECUTIVE KOALA alot more enjoyable. And the concept of a koala headed killer is pretty far out there and could have been taken in a bizarre and surreal direction. I could see this film being taken into a David Lynch David Cronenberg direction or maybe something like MEET THE FEEBLES. I would have liked to see the rabbit and the frog chopped up with axes or torn apart by bullets but none of that stuff happens so don’t get your hopes up like I did.

WHAT IS:
EXECUTIVE KOALA is a comedy and even though I would have liked to have seen it take a darker and more serious tone I still liked it. It tries to be cute and it succeeds. It starts off with a animated opening with a song about Executive Koala and how nice and happy he is. Tamura is pretty cute for a giant marsupial and there are parts where his huge eyes start to glow red and blink and he becomes very aggressive. So, is he a killer? Well, I guess your just gonna have to watch it and find out for yourself.

There are a couple of dream sequences and I have a problem with those because they build up the horror element but end with Tamura waking up so I felt a bit ripped off on those. There is a musical number that is borders on hilarious along with a few fights and there is a karate battle at the end that is one of the best/worst movie fights I have seen in a long time! They even use dummies during the fight and do not try to hide the fact that they are using dummies at all and these parts worked really well for me and were really funny!

But it does bother me a little that EXECUTIVE KOALA gets lumped into the horror genre. It’s clearly a comedy but there are no magazines, conventions, or rabid fanbase devoted to comedies like there are for horror movies. If anything EXECUTIVE KOALA comes closer to a Hitchcock flick than anything by Craven, Carpenter, or Lynch, or Cronenberg so that tears me up a bit. I do hope to see some full on horror movies coming out of Asia instead of these hybrid films that use horror as a springboard into another film genre.

The director, Minoru Kawasaki, has directed alot of movies, and with titles like, CALAMARI WRESTLER and CRAB GOALKEEPER, these should give you a inkling of what kind of movies you are getting into when you see one of his films. He does work well within the limits of a small budget and I felt the creativity, fun, and enthusiasm he has for making movies like these. It just oozes off the screen. I mean, I like comedies but I rarely watch them and when I do I stick to the classics and I think most modern comedies suck and most horror comedies lean more towards the comedy and EXECUTIVE KOALA leans more towards comedy as well. But I did laugh and giggle out loud a few times during EXECUTIVE KOALA and I never found it boring.

So is it worth buying? Hard to say. If I was a millionaire I would buy every horror movie and all the subgenres there within but since I am on a limited budget for horror habit I would pass on EXECUTIVE KOALA, but that’s just me. I am mainly into extreme gore and horror flicks from the 60’s, 70’s, and 80’s and EXECUTIVE KOALA does not fall into these categories so I am grateful my movie pimp Mikey sent it to me and I am glad I did see it and I just might watch it again. If you really like Asian films and movies like BATTLEFIELD BASEBALL, WHO WILL SAVE THE GREEN EARTH, CHAW, anime, koalas, rabbits, frogs, musical numbers, and horror comedies in general then you might just want to spend your hard earned money on EXECUTIVE KOALA. It’s worth watching at least once even if you are a more straightforward horror/gore fan.