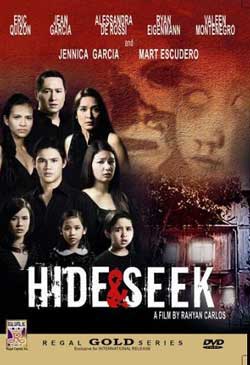 Eric Quizon plays Oliver Alicanio, a university professor who is tried and then acquitted in a high profile crime. He and wife Leah (Jean Garcia) with children, Uno (Julijo Pisk) and Nica (Jennica Garcia) go to the province to take a breather after a very stressful event in their lives. Nica actually resents her stepfather whom she believes is actually guilty. Meanwhile, trailing the family is Nica’s very ardent suitor –Joseph (Mart Escudero).

As soon as they stepped down from their car, the Alicanio Family knew that they are not alone in the house. Unknown to them, the mansion where they take refuge is haunted. Strange sounds of clanging pipes can be heard, Unearthly voices whisper in the corners, shadows appear in windows in the middle of the night.

Oddly, along with the haunting phantoms, the family will come across with a strange couple named Dolor (Alessandra de Rossi) and Gener (Ryan Eigenmann) Buntag whose only daughter Tala (Angel) will bore the key that unlocks all the unexplainable events happening in the house.

As sheer terror takes over the place, the family will realize that their only chance of survival is to run and hide before the sinister haunting spirit finds them.

The Japanese film RINGU singlehandedly reshaped the landscape of Asian horror cinema and affected American films as well. Many Asian countries have come out with their own RINGU styled feature and if not a blatant ripoff the vengeful ghost theme is in there somewhere. While HIDE AND SEEK is not one of these RINGU style clones it has a slight RINGU feel but has enough of it’s own identity that I did not totally dismiss it as a inferior film. For one it is a Philippino film and they have their own legends and tales to draw from and their films have a much different look than Japanese movies and even films from Hong Kong.

HIDE AND SEEK has a pg rating on back of the dvd cover but it deals with some heavy material right from the get go. Oliver Aliciano is a University Professor who is tried but acquitted of the rape and murder of one of his students who was is also the best friend of his stepdaughter. Talk about a touchy situation! People still believe he is responsible for the young girls murder including his step daughter , Nica , who does not hide the sorrow she feels for her dead friend and the disdain and contempt for her step father. 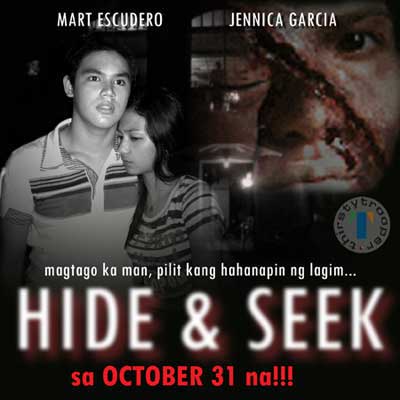 Not able to bare the strain of still being accused by the court of public opinion as a rapist/murderer Oliver moves his family to the country into a isolated house where they can hide from the scrutiny and indignation of those who still think he is a killer. And this is where the supernatural ghost vengeance mayhemic fun begins!

Oh and let me say how crotch meltingly cute Nica is! So. Dad , Mom , son , and daughter Nica , plus the nanny move into the house and right away things are bad. No electricity for one , that sucks and the ghostly sightings start pretty much when they arrive. I had seen HIDE AND SEEK once before and thought it was okay but upon a second viewing I like how it portrayed the ghosts.

It does show them as spectral figures hiding in the background or lurking in television giving not so cryptic warnings to get out , but there are scenes when a family member sees a ghost but they appear as a regular , normal looking person and the family member doesn’t know they are seeing a ghost. Personally , I’m still not sure if I believe in ghosts but I think if they are real they probably would look like a ordinairy person. Spooky!

So this goes on for awhile. The family members see a spook but do not tell one another ’cause they don’t want to look crazy but they all have more than one of these experiences. Unlike some other Asian horror movies I have reviewed HIDE AND SEEK has no comedic moments except for one when the nanny is singing a dumb song but this is unintentional and more embarassing I think.

The director tries to set a edgy claustrophobic tone and for the most part suceeds. We’ve all seen it before where the ghost is standing in the background or is revealed to be standing right behind someone. Well they do it in this movie and it still caught me off guard and I have already seen HIDE AND SEEK before. It even has some decent makeup efx as we see one of the ghost was killed by a machete blow across the face and it looks , really , really good , real gruesome. Congrats to the makeup people! Other than that though there is no graphic gore and I love gore , I really do , but I can’t fault HIDE AND SEEK for not having any flesh shredding or blood shedding , it’s just not that kind of movie.

I still liked HIDE AND SEEK , yeah it does drag a bit and has a running time a little longer than your average horror flick but it does have build up and has a decent ending and made me think about what it was like to be a little kid again and how what is scary ro an adult may not be scary to a kid and vice versa. 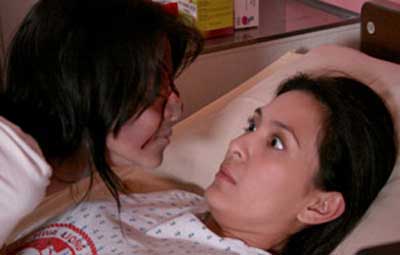 But I gotta mention how even though this film is rated pg there is violence towards kids and women which , to me is heavier and scarier than haunting ghosts and a movie could have been made about these subjects as well. Whether it be considered a traditional horror movie is debateable but these subjects could/shoud/need to be adressed. If you are into ghostly suspenseful fright films you could do alot worse than HIDE AND SEEK and you won’t feel as if you wasted time and money by viewing it. It even holds up to repeated viewings and got better so maybe if I watch it a third time I will love it.