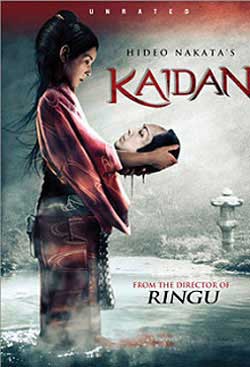 After a young man inadvertently causes the death of his wife, her jealous ghost comes back to haunt him — the unfortunate result of an ancient family curse incurred by an ancestor who murdered a debt collector. Hoping to escape his torment, the man runs off with one of his wife’s former pupils, which only enrages the woman’s spirit more. Kikunosuke Onoe and Hitomi Kuroki star in this spooky horror film from the director of Ringu.

I’m sure you all know that Hideo Nakata is the guy that directed the original RINGU, DARK WATER, and the American RING 2. DARK WATER is damn good and RINGU is a masterpiece so I am sure alot of people would be looking forward to whatever new movie he would make. With that I will start this review….

KAIDAN starts out strong with a haunting opening scene in black and white and looks more like a stage play than a movie and has alot of atmosphere. As a matter of fact I had trouble discerning if this was a older movie or if it was current. It begins with Soetsu, a moneylender who lends money to a samurai named Fumaki. When Soetsu asks for his payment Fumaki blows him off and tells him no. When Soetsu demands payment Fumaki repays him by slashing him across the face over his left eye. Soetsu swears he will come back from the dead and take his vengeance and Fumaki proceeds to kill Soetsu and disposes of the body. Soetsu does have two young daughters who look for him but never find any sign of what happened to their father. The samurai succumbs to madness; kills his wife and himself and his infant son is taken away to live with a uncle.

This is all in the beginning and it did grab my attention and when the title comes up it sets the mood that KAIDAN is going to be a creepy movie. But no, for the most part this was not to be. It picks up with the samurais son Shinkichi who is a man now and working for his uncle. Coincidentally enough one day he meets up with Oshiga, the daughter of Soetsu and who is older than Shinkichi and they strike up a relationship. At first it is rather innocent but soon turns romantic and both worry about what the rest of the villagers will think. soon though it seems neither really care what anyone thinks and they shack up together.

But Oshiga is older and becomes jealous when Shinkichi is nice to one of her students Oshisa. And I don’t understand why Shinkichi would do this, be nice to a younger and cuter girl than Oshiga when he already knows she is insecure….but anyway….Shinkichi and Oshiga get into a argument and even though it looked unintentional he strikes her over the eye with a huge guitar pick. It’s not a deep cut but as is he is nursing her back to health it gets infected and she gets kind of delirious.

And in a truly bitchmade move Shinkichi runs off with the cute young thing Oshisa leaving his old lady to die. But remember this is a curse/ghost/revenge flick and as the new couple flee through a rainy night in the forest they seek shelter under a bridge. As they huddle together they hear ominous footsteps from above. Oshisa runs off screaming nd Shinkichi is confronted by the spectre of his former lover and while she is strangling the life out of Shinkichi he conveniently finds a sickle and plunges it into the back of her neck. But it is not a ghost it is his new girlfriend Oshisa lying dead before him!
He makes it to the village they were heading to and is nursed back to health by the family of his dead girlfriend and it is the sister that takes a liking to Shinkichi! I know this must be part of the curse but it’s kind of a good curse because Shinkichi keeps meeting up with all this fine tang!

To the scumbuckets credit he tells the girls family that he can’t be with their daughter. The daughter, Orui, gets upset and scurries out in tears and Shinkichi follows to console her and as they are talking their is another accident and Orui gets a wound above her left eye. Shinkichi promises to take care of her and slowly but surely they hook up. But it’s a little better this time and they get married and have a baby. But the baby has a birthmark above it’s left eye and just stares accusingly at Shinkichi. And once again he meets another gorgeous village girl but this one is not after Shinkichis wienie! She’s after his cash, or more specifically the cash of his father in law. She know he is responsible for the killing of Oshisa and this new girl even has the sickle he did it with and has someone helping her.

The curse sure is kicking in by this point in the film. And his baby keeps staring at him and and won’t let out peep and in one of the more disturbing moments in the film Shinkichi starts to strangle the infant. They don’t actually show a baby being choked out but it is more than implied and I found myself a little repulsed at Shinkichis actions. His father in law bursts in just in time to save the little tyke and tells Shinkichi that if he ever harms his grandchild or daughter again he will kill him. And it just gets worse! The blackmailing bitch finally scares Shinkichi enough for him to get the money to pay her off in exchange for her silence and the murder weapon but his father in law catches them in the act and winds up dead at the hands of the blackmailers.

As far as horror movies go KAIDAN isn’t that good. It does have a couple of spooky ghost moments but it’s not a blood and gory frightfest. Well, it does get violent and bloody but not till the end. But that doesn’t mean it sucks. On a technical level this film is topnotch as well as telling the story and letting events unfold it is very well made. The special effects are as good as any big budget Hollywood film and the actors are too and KAIDAN does have a great ending. To tell the truth though it is kinda boring in the middle but the ending is really got me back into it and the very end is very dark and eerie.

Hideo Nakata is a good film maker and could probably keep making boring movies the rest of his career just on the strength of RINGU alone and if you like dramatic period pieces with a tinge of terror then you might like KAIDAN but I really didn’t and I don’t think I will watch it again. I will probably rewatch RINGU and DARK WATER and hope Hideo Nakata will explore other regions of horror because he is a good film maker and I know has a few more scary films up his sleeve ready to jump out and scare the crap out of us again.