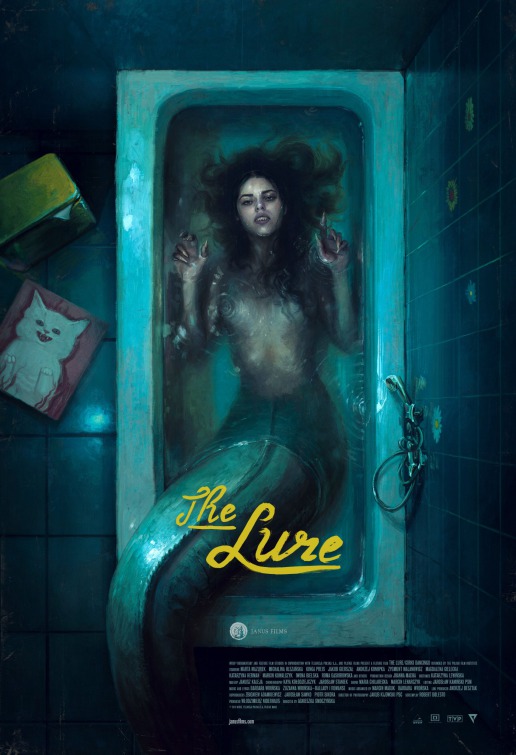 In Warsaw, a pair of mermaid sisters are adopted into a cabaret. While one seeks love with humans the other hungers to dine on the human population of the city.

Ever watch a movie and right after you watched it, you wanted to punch the people who made it and then punch yourself for watching it? You sit down, start the movie, and something about it just makes you hate it with a passion. After it’s done, you want to burn the movie and anything that touched it.

The Lure is a Polish musical that tells the story of a night club band that come across two mermaids, named Golden and Silver, while practicing their act on the beach. The mermaids start singing along, and the band decides to include the two in their act. Luckily for them, the mermaids grow legs and can walk on land when they’re dry. However, if they get water splashed on them, it’s fish tail city. It’s kind of like the move Splash in that respect. Anyways, the band becomes popular because people want to see the singing mermaids. Things gets complicated when Silver starts falling in love with one of her band mates that looks like he could be the winner of the Evan Peters lookalike contest, and Golden’s jealousy begins to manifest itself violently.

This flick has an interesting premise, and does a fairly decent job of exploring some of the lore around mermaids. Another aspect is that these mermaids can extend their teeth into fangs, and they’re not afraid to use them. We get to see a few scenes of them gorily feasting on people. The actresses, Marta Mazurek (Silver) and Michalina Olszanska (Golden) give the mermaids a sense of innocence and seductiveness. I want to give a special nod to Olszanka, who gives her character a real sense of menace. There’s a predatory nature she brings to Golden that gives her an air of danger, especially after we see her eat a dude.

Everything is smartly shot under the eye of director Angnieszka Smoczynska. With set designs and camera angles, he’s able to add an ethereal quality to the scenes that need it while adding tension when necessary. This is a director that knows what he wanted out of his scenes and got it.

With that said, there are problems with this flick. There are characters that are introduced for one scene with little explanation and then dropped. For instance, Golden is approached by a a cop who suspects her in the death of man found on the beach. She immediately has lesbian fish sex with her suspect and is never seen again.

What seemed like a potential subplot is introduced and dropped within minutes. There’s a scene where the band, which is a very dysfunctional family, break into a fight after they try to rid themselves of the mermaids. After the fight, they appear to be almost be dead until a nurse, who we haven’t met before, just shows up and starts giving them I.V.s. It would have been nice if we knew who the hell this lady was or where she went after that. Moments like that made the movie frustrating, and if you’re like me and you’re already aggravated with this movie you’ll end up wanting to punch your screen.

I’m not the biggest fans of musicals, but if they’re done right I can get on board. For instance, I’m one of those people that really liked Repo: The Genetic Opera. Musicals can be a hard thing to pull off, and even harder if you’re trying to mix both fantasy and horror. If you don’t like the songs, then this movie will be an unpleasant experience, I hated the songs. I didn’t like their sound, and as soon as they began I wanted them to stop. The songs weren’t poorly performed, but they weren’t my style of music. It’s just that something about them made me want to stick an ice pick through my ears to make the pain go away.

I think this movie is one of those “hate it or love it” flicks. There isn’t much of a middle ground. After sitting through the songs, I ended up really hating this movie. There are pluses to it, and if you don’t mind songs that are little “pop” you might find this exploration into mermaid mythology interesting. If you want some songs with some real oomph or don’t like musicals, you may want to pass this one by and save yourself the agony.