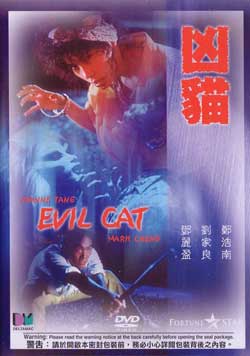 Korean slasher about a group of young people who reunite with their now wheel-chair bound teacher. The happy gathering turns into a nightmare as old grudges and hidden truths surface and one by one the former classmates vanish in a series of unforgettably gruesome murders.

Now here is a cat III Hong Kong flick that you wanna seek out! But I also gotta mention the trailers on this disc because they look as good if not better than EVIL CAT! HAUNTED SHOP and VAMPIRE VS. VAMPIRE! Awesome titles don’t you agree? So both deal with Vampires and I need to get my blood soaked little claws on these films! Wait , that’s not blood it’s – nevermind.

EVIL CAT jumps right into the horror action , it’s got great atmospheric music creating a horrific mood as the credits roll and the first thing we see is the EVIL CATS spirit being released by some unwitting construction workers , in classic late 80’s animated optical efx glory. And the action and horror pretty much doesn’t let up from there. We get a flashback showing how the EVIL CAT was imprisoned beneath the earth and we get to see what the EVIL CAT looks like. It’s a white kitty cat and looks a little better than the makeup in the Broadway musical CATS , but it still looks cool and totally works for the type of movie it is.

Now , Master Cheung is trying to kill the CAT but as you well know CATS have nine lives and this EVIL CAT is ove 900 years old and if it isn’t eliminated it will become completely unstoppable. Master Cheung needs help though so he recruits a random guy , Long , by literally standing in the middle of the road until the first car comes along and almost runs him down, Master Cheung gets in the car and tells Long he must become his student and learn the ways of Mao Shan. Long says sure why not. Meanwhile the EVIL CAT body jumps into Longs boss Mr. Fan and goes after Long killing other poor saps along the way and creating all sorts of mayhem. Other characters worth mentioning are Siu Chen who is Master Cheungs daughter , a reporter on the trail of the brutal slayings and Handsome Wu , the detective on the case. That’s right his name is Handsome Wu , that’s correct.

EVIL CAT has so many things going for it , it has a fast pace , heaps of special efx , kung fu action and humor. It’s what the FOX WITH NINE TAILS should have been , but they do share many of the same traits. In both films there is a scene where the people trying to stop these supernatural pets from hell burn a piece of paper with writing on it then drop it in a bowl of water then drink the water to protect them these beasties. FOX GIRL and EVIL CAT also share some of the same powers. Like FOX GIRL , EVIL CAT is superhumanly strong , it’s eyes glow red as well , it has telekinetic powers , and is almost impossible to kill. The EVIL CAT can only be killed by these special arrows that Master Cheung wields.

Yes , EVIL CAT is a horror movie but it is a b – movie too so there is plenty of humor but I think some of it is unintentional and that’s just the way we westerners view behavior of asians that may seem odd or funny. Then there is the heavy use of kung fu which is well choreographed and is pretty brutal and does not detract from the horror element. And like I mentioned before the music , lighting , and camera angles tell you that this is a horror movie along the lines of EVIL DEAD 2: Dead By Dawn and BRAINDEAD!

It’s alot of fun and even though it does have these comedic moments as the movie progresses the EVIL CAT displays how deadly and unkillable it is. It jumps into Mr. Fans secretary , Tina , and in probably the best part of the movie Tina invades a police station looking for Handsome Wu and starts ripping apart and killing cops TERMINATOR style! Oh , but without any guns though. She’s tossing men around like rag dolls , punches straight through a mans chest , even knocking a cops head off with one swipe of her arm!

The pump her fulla lead even shooting her in the head but she just keeps going! These scenes are not totally splattered with blood n’ guts but it is good violent viewing pleasure and fun for all! And even from this scene the action just keeps going and things start to get dealy serious. EVIL CAT is like a unstoppable cyborg from the future and you start to wonder will any of our heroes survive? I don’t want to reveal any more ’cause it’s so much better to discover all the little nuances and details for yourself. This is a good flick and worth seeking out , I’ve seen it at least four times and will probably see it again.

Unfortunately I do not think you can get this on dvd in the U.S. yet and that sucks , I might be wrong but I don’t think it is. But if you are a hardcore horror hound like the rest of us at HorrorNews.net , I’m sure , you will find a way. Happy EVIL CAT hunting.