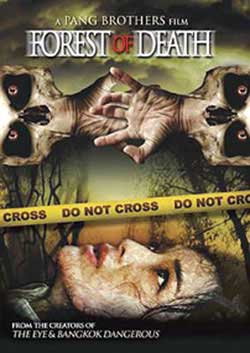 Detective Ha (Qi Shu) investigates the rape and murder of a woman who died in the Forest of Death, a popular suicide spot considered haunted. With the help of botanist Shum (Ekin Cheng), Ha tries to identify the killer by unlocking secrets held by the forest’s plants. This horror movie also follows Shum’s girlfriend, May, a television reporter who grows increasingly popular as she chronicles the paranormal activity happening in the forest.

This might be one of the more important reviews I have done for Horrornews.net. Because as much as it is a review it is a warning to steer clear of FOREST OF DEATH. I don’t like saying that and I wish this would of been a good movie but it’s not. I try to find the good in any movie but the good in FOREST OF DEATH is very little and not worth sitting through for a few tidbits. And I will just come out and say it.It’s Aliens. That’s the big secret that is revealed at the very end and I do not feel bad about telling you the secret of FOREST OF DEATH. I sat through the whole thing, actually I was laying on my couch and watched it in two segments, but you know what I mean and I watched it so you don’t have to.

But if you are still curious I will tell you what it’s all about because it does have a interesting premise. It’s set in China in a forest where people go to commit suicide. In the beginning they mention that there are several forests around the world where people go to kill themselves. They mention one in Japan and that one exists here in America! I haven’t heard of this forest, have you? I have heard of the one in Japan and the Sci – Fi network show DESTINATION TRUTH they did a episode on the one in Japan and the show made it seem sad and depressing how all these people go to this forest to die and if the movie would have explored this aspect more it definitely would have been a better movie but they do not.

FOREST OF DEATH also involves a Detective C.C. Ha who is trying to determine if a young man, named Patrick wong, found a young girl hanging from a tree in the Forest Of Death and tried to save her or if he was the one that raped and killed her then hung her from the tree with a rope. Then their is the scientist Shum Shu – hoi who has discovered that plants can tell if human beings are lying or telling the truth and can also project feelings and images into people heads. And now that I have written this down it sounds alot dumber than the way they pull it off in the movie. When Detective Ha learns what this scientist has discovered she goes to him to see if he can help her prove if Patrick Wong really did discover girl he says he found hanging in the Forest Of Death or if he is the one that murdered her. Which culminates in the scene where Detective Ha takes Patrick Wong, along with the scientist Shum Shu – hoi and a host of reporters, camera men, and cops to see if the plants and trees will tell if Patrick Wong is the killer or if he really did go to the Forest Of death to kill himself and found the girl hanging from the tree like he said.

At first nothing happens and everyone starts laughing at Detective Ha and the scientist Shum but before long some unseen force hits Patrick Wong and forces him to his knees and he starts choking. Then, because of the plants, everyone gathered around can see in their heads what he did to the girl and that, indeed, he did rape and kill her and in the sickest scene of the movie, and probably the grossest scene I have seen in a film in some time the killer swallows his own cum filled condom! Couldn’t he have disposed of it in another fashion? Looks like he enjoyed it to.

So Detective Ha gets her man and the scientist even gets his own show but his news reporter girlfriend, May, isn’t to pleased about this and about the fact that Shum has been spending time with Detective Ha, even if it is only in a professional manner, so May takes off into the Forest Of Death and Detective Ha and Shun Shu – hoi must go after her. Not only do people go into the Forest Of Death but compasses and cell phones do not work in it and it is almost impossible to find your way out once inside.

But by this time I has stopped caring about what was going on and this movie just takes too long for anything to happen and this is not a horror movie, it just disguises itself as a ghostly supernatural thriller but technically it is a sci – fi film but it is a cheat at that as well. When we finally do see the lights from the spaceship it is only for a few seconds and you don’t even see the ship. Plus we do see the aliens but they are just misty shapes in the forest so they do look like ghosts.

But Forest Of Death doesn’t even try to be a horror movie. There is no creepy music and there a very few night scenes and when they are in the Forest at night it isn’t used to it’s full effect. The body count is at 2 or 3 and there is no bloodshed or gore to speak of. The used condom swallowing is the only gross out scene and I doubt you are going to watch a movie for one scene of a guy devouring his own spunk loaded rubber and if you do….you are sick and probably having mental problems.

Now, I been bashing this flick and deservedly so and I had to sit through this so you don not have to. But I have seen tons of flicks that were technically worse than FOREST OF DEATH but at least they were intentionally or unintentionally fun or cheesy or had something going for them and were watchable on some level. Ya know, the whole ” It’s so bad it’s good thing “. FOREST OF DEATH isn’t horrible but it is bad. Bad and boring.

I will leave you with what I did like about it though. Yes, on a technical level it is a well made film and looks really good. You can tell they had a decent budget to work with, the special efx are good, and the actors all put in a acceptable performance.

But what I liked about it most was Detective C.C. Ha. She is a very pretty girl and grabbed my attention and made it easier to make it through till the end of the film. In fact you might remember her from THE TRANSPORTER. Her name is Qi Shu and she is a small and slight person with big full lips and beautiful and thick lush hair and is stylishly dressed in the film. I did find it a bit hard to believe she is a hard nosed detective but I would love to be taken into her custody! So if you are a bigger Qi Shu fan than I am and you gotta see every movie she’s in, and she has been in quite a few, you might want to see this but there’s not much else a horror fan will get out of FOREST OF DEATH. So there. there are many Chinese films worth your time exploring but this is not one of them.