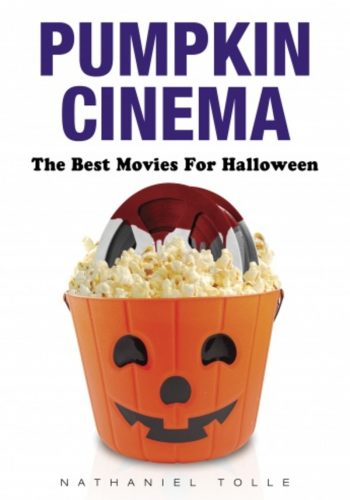 I love Halloween.  Both the movie and the holiday.  When I was a child, Christmas was the most magical time of the year, but from the late 1970’s on the month of October has been my favorite time of the year.  The indescribable feeling of the crisp autumn air, the falling leaves, the cloudy skies, the overcast horizon and scent in the wind are the hallmarks of the most amazing atmosphere to grow up in.  The days leading up to Halloween are so exciting when we are kids that we ready our costumes to the point that we can hardly stand it.

Halloween is also the time of the year that we get to watch scary movies.  While Abigail McCoy cannot appreciate our love of horror movies, a lovely book from Schiffer Publishing called Pumpkin Cinema: The Best Movies for Halloween, written by scary movie fan Nathaniel Tolle, is a valentine for anyone who loves the holiday of Halloween and is looking for recommendations for their holiday viewing pleasure.

The introduction is a joy to read as Tolle sets up the scenario that many people across the country find themselves in on Halloween: the kids are wiped out from scoping out the neighborhood for candy and the adults are tired from having to put all their efforts into scaring the kids and answering the doors.   At the end of the day, we want to watch a scary movie!

Tolle sets up criteria for this once-a-year event to include films that need to be fun to watch and avoid films that are not uplifting and memorable.  At 175 pages the book is adept at recommending films that are not only spooky but also television shows that most of us grew up seeing in the month of October.

The film titles are arranged alphabetically and begin with one of my favorite movies of all-time, Abbott and Costello Meet Frankenstein (1948), which is so much fun and can be watched over and over again that it’s hard to believe that Lou Costello hated the script and didn’t want to make it.  Arsenic and Old Lace (1944) doesn’t immediately come to mind as a Halloween movie…until you realize that it takes place on Halloween!  Black Sabbath (1963) by Mario Bava consists of three short stories, the final one being the scariest and most effective, as does 1985’s Cat’s Eye, a cute entry in the Stephen King film canon.  A forgotten gem from 1984, The Company of Wolves, should get a Blu-ray upgrade.

Creepshow (1982) is the quintessential Halloween movie, as it was the inspiration for the television series Tales From the Darkside, and is also arguably considered to be the best anthology horror film of all-time.  The D’s bring us to TV’s Dark Night of the Scarecrow which, can you believe it, is 35 years-old?  The Evil E’s bring us the Evil Dead films, which I like but don’t worship the way that most die-hard fans do.  The Funhouse is my favorite F title from the book, with Sylvia Miles spouting my favorite line which employs, interestingly enough, the F-word.  The H’s give us the 1963 masterpiece The Haunting and, of course, the Halloween films, but I am glad that Tolle extolls the virtues of Tom DeSimone’s Hell Night (1981) one of my favorite horror films that is still absent from Blu-ray.  Insidious is a fairly creepy film, but I was thrilled to see the inclusion of Don Coscarelli’s 1976 film Kenny and Company, which provided the inspiration for Phantasm (1979).

And what Halloween would be Halloween without Killer Klowns from Outer Space?!  The sole L title is Richard Blackburn’s classic indie Lemora, a Child’s Tale of the Supernatural.  Tim Burton’s The Nightmare Before Christmas (1993) never gets old, although I wish the M’s included 1969’s Mad Monster Party?  The Omen (1976) is one of the scariest movies ever, and the aforementioned Phantasm (1979) is in a class all by itself.    Race With the Devil (1975) is classic B-movie drive-in fare.  Stagefright (1986) and Suspiria (1977), the former on Blu-ray and the latter coming soon in a stunning transfer, are perfect October flicks.  Despite being made in 1954, Them! Is a truly creepy film.  David Schmoeller’s 1979 mannequin nightmare Tourist Trap is one of my personal favorites and Tolle correctly states that it is probably the most under-rated horror film of all-time (this, along with Alfred Sole’s Alice, Sweet Alice from 1977, are two classics).  The book ends with a nice section on TV Halloween shows, specials, and episodes of series that take place during this holiday.  The scariest one that I ever saw, though not mentioned in this book, is the episode of The Waltons called “The Changeling”.

Though not mentioned, I would like to recommend 1969’s Winter of the Witch, a wonderful children’s film that I saw in elementary school in the mid-1970’s.

The one that I have been looking for 32 years is an episode of the short-lived NBC television series from 1984 called Scene of the Crime which was hosted by Orson Welles.  The best episode I saw was called “The Babysitter”.  Someone out there has it!