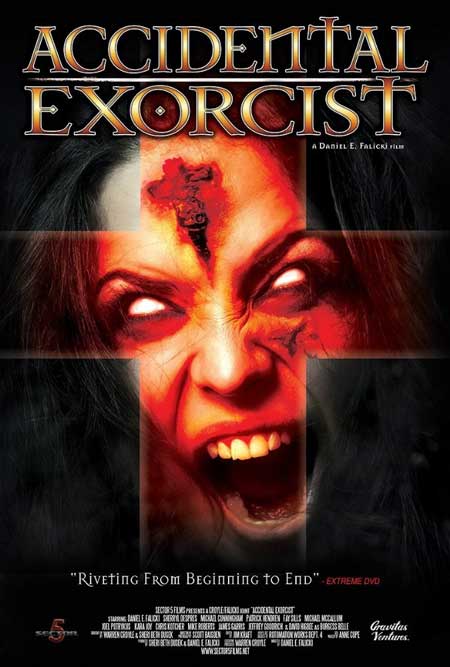 Fate has dealt Richard Vanuck a very strange hand; he’s a natural born exorcist. In fact, he’s the best there’s ever been, and with possessions on the rise across the city he’s booked solid. Eventually he comes to realize that performing exorcisms is the only thing he’s truly good at, even though his daily battles with Satanic forces are wearing him down.

I will admit, I’m not a fan of possession films. They generally tred the same ol’ steps, and though some may have a trick up their sleeve here and there, they typically feel samey and I tend to avoid watching them now. So with this little bit of back story I am sure you can imagine my enthusiasm to review Accidental Exorcist when it was assigned… None. I had no enthusiasm… Just in case you didn’t get it…  BUT, to my surprise, this darkly amusing, odd little film had me intrigued from the get go. You see, Accidental Exorcist vomits the tropes of the possession genre and rams a crucifix right up their collective cun–well, you get the idea. 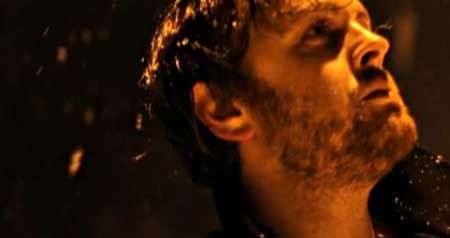 Writer/Director Daniel Falicki instead conveys the story through the eyes of our “Protagonist”, Richard (played by Daniel himself), a permanently clammy drunkard who has the innate ability to exorcise demons and, well, pretty much nothing else other than the shittiest of shitty apartments. This is an interesting and, at the beginning anyway, refreshing perspective as the viewer isn’t privy to the rigmarole of the possessee becoming possessed. Richard just shows up and does his “thang”.

And this “thang” Richard, er, “thangs” is what keeps you interested for the most part of the runtime. You see, Richard likes to chat with his clients before doing the deed. He chats about his family, past, pets, feelings, anything he bloody well wants as the demons generally don’t respond back, except for when he’s pissed them off, which is his intention with these conversations. These are the closest things Richard has to normality in his life, so it’s more of a therapy session for him than it is for the possessee. And though these hold the most entertainment value for the viewer as they really help you feel the dredge that is Richard’s life, they are also the possessed one-trick pony of Accidental Exorcist. Even more troublesome to the film; these exchanges, and the numerous times they are played out, ultimately provide nothing to the film in terms of Richard’s arc/journey. In fact, very little of the whole film does.

After the first few exorcisms, Accidental Exorcist becomes very episodic with a formula of Exorcism – reiterating Richard is a drunk – Richard threatening his “boss” he’ll quit – Repeat.  There is very little else to Accidental Exorcist and once it becomes apparent, the curiosity and enjoyment wanes fast. Throw in a runtime at least 30 minutes too long, a third act which felt incredibly forced and an ending which was more confusing than satisfying, and you have an ambitious project that falls rather short.

There is a tidbit of what could have been in a scene with Richard conversing with a client after the exorcism, something Richard never gets to do in his job, and this really added an emotional element to the film, but it was fleeting and never really explored any further. Such a shame as it could have added a much needed level to the film’s rather basic throughline.

Ultimately more time should have been spent on developing Richard, his back story, his relationships (or lack of) and his decision as to why he didn’t go global (and profitable) with his skill instead of being paid barely enough to pay his rent and live. So very little is given to you other than “Richard can exorcise demons, is a drunk and hates his life” that you are left very wanting.

Cinematography was quite solid, with colors and sounds playing a big part to the overall atmosphere of individual scenes. You can tell a sizeable amount of thought and effort was placed in this area. Throw in solid acting and some interesting camera angles and the presentation of Accidental Exorcist was decent enough to satisfy. 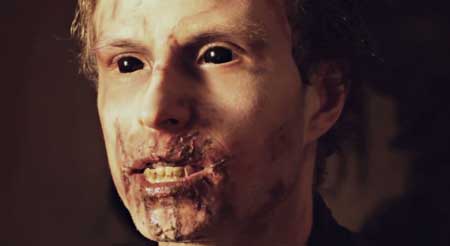 Would I watch this again? No. As I said, there just wasn’t enough to engross me once the curious amusement wore off. I simply wanted more than witty dialogue and projectile vomiting… There is a lot of projectile vomiting in this film… 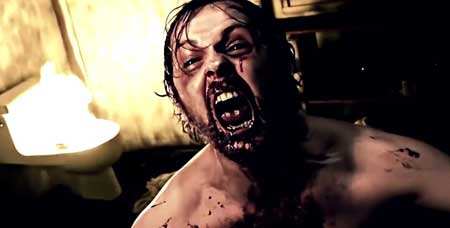 Would I recommend this? Yes. Despite all its flaws, Accidental Exorcist should be seen. As long as you go in with little expectations of any meaningful character journey, you’ll be entertained.

3 out of 5 empty bottles of alcohol