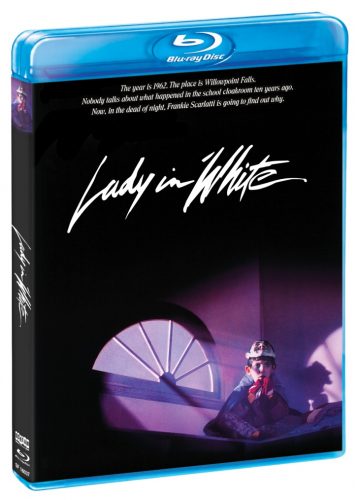 “A ghost story that truly haunts. This one is going to scare you senseless.”

Sometimes it takes a little help from the living for the dead to rest. Scream Factory™ proudly presents Lady in White for the first time ever on Blu-ray on September 27, 2016. This 2-disc set includes the never-before-released full-length director’s cut, extended behind-the-scenes footage, and many more special features.

For ten year old Frankie Scarletti (played by Lukas Haas), school isn’t just a place for learning. On Halloween of 1962, after being forced to spend the night locked in the coffin-like confines of his fourth-grade cloakroom, Frankie discovers the ghost of a little girl who was murdered in the very same room ten years earlier by a serial killer that has eluded the police for the last decade . With the death toll continuing to rise, Frankie, along with the help of the girl’s restless spirit, takes it upon himself to bring the killer to justice.