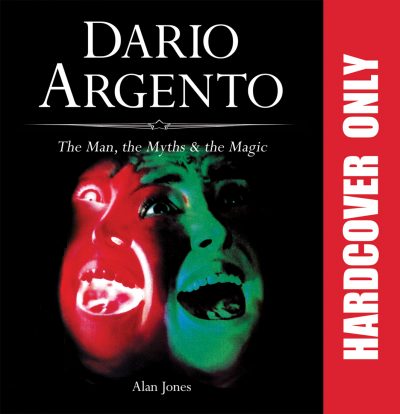 Alan Jones’s incomparable tome on Dario Argento, originally titled Profondo Argento and now known as Dario Argento: The Man, the Myths and the Magic, is now available for pre-order from FAB Press out of the UK in a very limited edition, covering his entire career.

PLEASE NOTE: Before ordering, you may be interested in either the ULTIMATE COLLECTOR PACK or the HARDCOVER AND T-SHIRT edition. Please check out all the options first and make sure you choose the option you prefer.

Pre-Order Terms and Conditions: Payment will be taken immediately upon completion of your order. By pre-ordering this book you agree to pay in advance of publication, on the understanding that it will ship during the final week of August 2016. 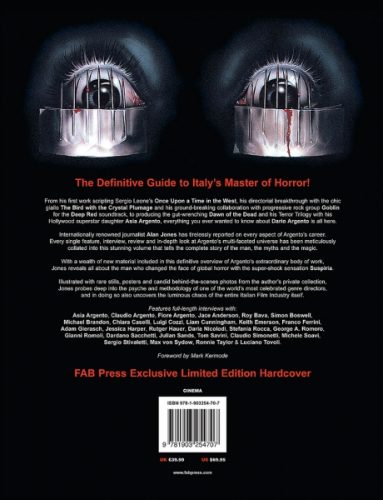 Internationally renowned writer, broadcaster and author Alan Jones has tirelessly reported on every aspect of Argento’s career for more than three decades. Every single feature, interview, review and in-depth look at Argento’s multi-faceted universe was meticulously collated into one stunning, Sold Out volume, originally called >Profondo Argento. Available again at last, now under a new title and cover, Dario Argento: The Man, the Myths and the Magic includes a wealth of fresh material and interviews exclusively conducted for this exhaustive overview of Argento’s extraordinary body of work. Illustrated with rare stills, posters and candid behind-the-scenes photos from the author’s private collection, Jones probes deep into the psyche and methodology of one of the world’s most celebrated genre directors – and in doing so also uncovers the luminous chaos of the entire Italian Film Industry itself.

From his early beginnings scripting Sergio Leone’s Once Upon a Time in the West, his directorial breakthrough with the chic giallo The Bird with the Crystal Plumage and his ground-breaking soundtrack use of the progressive rock group Goblin, to producing the gut-wrenching Dawn of the Dead, his Terror Trilogy with his Hollywood superstar daughter Asia and helming his latest thriller Dracula 3D, everything you ever wanted to know about Dario Argento but were afraid to ask is all here.

Rarely has any journalist ever been granted such wide access to the life and work of his all-time favourite director. Yet that’s precisely what happened to internationally renowned writer, broadcaster and author Alan Jones who won the respect of Dario Argento for his detailed location reports and critical assessments of the Italian Master of the Macabre.

Alan Jones writes for every issue of Cinefantastique, Starburst and Radio Times. He has also written for Empire, Fangoria, Neon, Heat, GQ, Vogue, FHM, Film Review, Vox, Preview, Shivers, Femme Fatales, The Independent, The Guardian and Premiere. He has been a member of the critic’s jury at the Sitges, Fantasporto, Paris, Rome and Avoriaz fantasy festivals and, after co-presenting the legendary Shock Around The Clock festival in London, and Fantasm at the National Film Theatre, is now co-organizer of the London FrightFest.