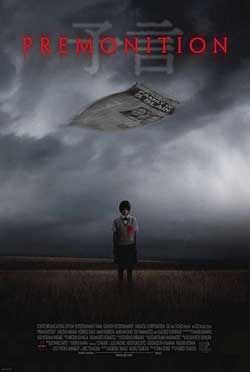 While stopped at a roadside phone boot for transmitting his work through Internet to the university, Professor Hideki Satomi finds a scrap of newspaper with the picture of his five years old daughter Nana in the obituary. He sees his wife Ayaka Satomi trying to release their daughter from the seat-belt, when a truck without steer hits his car killing Nana. Three years later, Hideki is divorced from Ayaka, who is researching paranormal persons who claim to have read an evil newspaper anticipating the future still trying to believe on Hideki, and she finds that there are people cursed to foresee the future but without power to save the victims. When Hideki changes the future saving Ayaka, he becomes trapped in hell and he has to make a choice of his own destiny.

This is sort of a hard one. I thought RINGU was great , fantastic , one of the more original horror movies I had seen in some time. I liked DARK WATER and it wasn’t until after I had seen even more J – horror that I saw JU – ON (THE GRUDGE) and I was really surprised at how good this one was as well. Then the flood of atmospheric ghostly J – Horror came out and it was impossible to keep up with them! I knew they could not all be good but I had come to think that many of them would be worth looking into.

I found out a little more about THE PREMONITION , found out that LIONS GATE had cut a deal with a Japanese company to make six horror movie geared toward the American audience and that THE PREMONITION was one of them. This bothered me a little since they were intentionally trying to capitalize on what RINGU had done almost accidentally. I had see THE PREMONITION before but wanted to see it again to refresh my memory and give it a proper review and upon a second viewing it is still a good film.

Boiled down the story begins with a family on the way home from a vacation. Dad ,Hideki , the mom Ayaka , and the daughter Nana. Along the way the dad wants to stop at a payphone to email some papers to his job. While waiting for them to go through he notices a yellowed scrap of old newspaper poking out from under a phonebook and grabs it to take a look. He sees a news article about the death of a young child in a fiery car wreck with a picture of is daughter. Seconds later a truck slams into their car. His wife gets out of the way but his daughter Nana is trapped inside and dies a horrible and agonizing burning death! Shocked and in horror Hideki stumbles around searching for the paper that predicted the death of his daughter as his wife pleads with him that there was no such paper.

Eventually they get a divorce and time passes This is not the type of horror movie that I would seek out. I go for the gorier side of things and we all know that the Japanese deliver on that end in spades! But again with the more low key movies like RINGU , JU – ON , even AUDITION I will always be curious as to what new underplayed yet original and scary suspenseful horror they can dish out. You can probably tell that THE PREMONTION is not a gorefest , doesn’t go for a B – movie feel , and there are only a few frightful jolts…..so why the hell did I like it? I don’t know really but it is just a good movie and I have read some reviews that say it is slow in some parts but I wouldn’t even say that. It’s definitely a character and acting driven movie and thanks to the two leads you do get drawn into what happens and sympathize and care about them.

And actually the actress that plays the mother Ayaka is a very very pretty lady but she is so good in her role that I felt bad for checking her. Now that’s some good acting! The actor who plays the father also does his job well , looking like a lost , wounded , and tortured soul. And Unless you are a total A – Hole and have no soul or are so hardened by life , watching this should make you think about the losses you have suffered in your life and how sometimes you just have to let go and get on with life. A good movie should stir up something inside you and at least THE PREMONITION should be commended for that.

Oh yeah the movie! Hideki teaches at a university while his wife works with a paranormal research facility and is trying to find out more about the origins of the newspaper of terror. She meets a psychic who tells her of a researcher names Rei Kigata who was searching for the same thing but mysteriously disappeared. Soon the death predicting newspaper rears it’s ugly newsprint once again around Hideki taking the lives of one of his students and he reconnects with his ex – wife Ayaka to discover the source of the newspaper. Their investigation leads them to a mental hospital where a young boy could predict accidents , murders , deaths and it drove him crazy. Then they discover some videotapes of Rei Kigata showing how he could predict the deaths but how he took it upon himself to stop them. And he was able to stop them but with detrimental affects on himself and as the movie progresses I actually felt a little dread and seeing that damn newspaper!

Now the husband Hideki takes it upon himself to try and stop the predictions of the newspaper even getting the chance to go back in time to prevent the death of his daughter. But this is where THE PREMONITION goes into somewhat cliched territory as the husband starts jumping around time and doesn’t know if it is a dream , reality , or even some sort of hell. I think I may have revealed too much of the plot and the ending so I will say no more.

So yeah THE PREMONITION is worth a looksy if you really really like the more suspenseful thriller types of movies. There are two moments of , gore or shocking images , I guess you could say. One is when we get to see what the daughter looks like all burned up and crispy which is somewhat disturbing and creepy and the other I will not tell you about. So yeah this is a hard one to recommend. It is good but almost not a horror movie but it is a good film , kind of dry and much fun but I gotta say if you really like J – Horror you could do alot , ALOT worse. 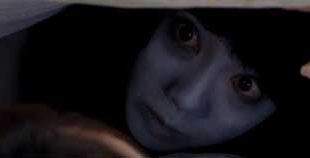