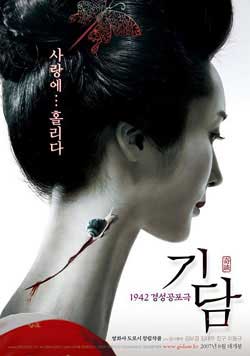 Dr. Park Jung-nam browses through an old photo book and reminisces back to 1942, when Korea was occupied by Japan, and he was a young doctor in Ansaeng Hospital. During that time, strange events happen, as corpses brought to the mortuary aren’t able to rest in peace.

The Examination: The exact reason why NOT to hang out in a morgue

Epitaph consists of three complexly weaved supernatural, and separate, stories surrounding the main character and his colleagues. It’s set in Seoul during the Japanese occupation of Korea, has great visuals, and provides a decent amount of twist to keep your interest. Its multiple flashbacks make the movie a little convoluted, but manages to pull it off. Still, make sure you pay close attention.

The movie opens showing a dated and graphic clip of brain surgery as a part of now aged Dr. Park Jung-Nam’s class. In his office, there’s a brief telephone conversation where Park discovers that the Ansaeng (Safe Life) Hospital , one of the most modern medical facilities in the colonial period, is about to be demolished. This sets off reminiscences of his experiences at the hospital in 1942 when he was a young medical intern. It should be noted, that before he starts to recollect the events of 1942, there is a conversation between Park and his daughter. During that conversation, Park is clearly harboring guilt because the wives of his previous two marriages, both died less than a year after wedlock. His daughter tries to console him, and after Park tells us that it was the last time he would ever see his daughter again, he begins to reminisce. It’s apparent that 1942 was a time in his life where he lost something very important, possibly his marbles, not to mention experiencing a series of strange supernatural events. But as the preface will tell you, it’s the year that a significant part of his soul dies.

Before diving into the core of the movie, let me just say that I have no idea what the meaning of snails are in this movie. All I put together is that when I saw a snail, something creepy was about to happen, so look out for the snail trail. Now, while reminiscing, Park begins to recall some weird and not so weird events. The ONLY not so weird, but tragic event, is Park’s ( Jin Goo) arranged marriage, to whom he has never met, has unbeknownst to him, committed suicide with another lover (who’s body was never discovered during the intense 4 day search).

Other than the snail(s), what is just plain weird is that while Park is awaiting his fiancée’s arrival from Japan, he is assigned to the morgue. I know, that’s not weird, but this is – while in the morgue, Park becomes enamored with a recently deceased woman. He finds himself spending more and more time in the morgue to be close to the cadaver, having one way conversations, playing with her strangely familiar wedding band, and drawing pictures of her. Ultimately weird, he falls in love with the corpse which turns out to be his deceased fiancée. Gotcha on that one, huh?

So how will the corpse ever repay him for such romantic, devoted, and unwavering attention? A word of warning, if you’re ever in a morgue and hear knocking coming from inside one of the body drawers, don’t open it! Especially if you see a snail!

It turns out that the hospital director, Park’s adoptive mother, is aware of the identity of the suicide victim. And for no other reason than her own, secretly had Park and his deceased fiancée’s soul married to keep her from being with the other man that she committed suicide with. In her words, “marries a dead soul to a living body.”

Other mysterious events start to plague the hospital, such as the arrival of a new patient, and the events surrounding her tragedy. A young girl, Asako (Ko Joo-yeon) , has just been involved in a horrific car crash that has taken the life of her mother and her mother’s boyfriend, Koshiro (David McInnis). As the sole survivor, Asako is traumatized. Unable to speak because she is guilt ridden, she cannot tell Dr. Lee (Lee Dong-gyu) who is earnestly trying to help her, that she is continually tortured by bloody visions and the lingering ghost of her dead mother. Now this may sound harsh, but she deserves it. I have no sympathy. She caused the crash because she was jealous of her mother and Koshiro. So bloody mother, bring it on. The mother is pretty doggone creepy too. I wouldn’t want to meet her anywhere anytime soon! And kids, never tell your mother you hate her! Eventually, Asako is vindicated by mom.

Another story unfolds as a married couple return from Japan to work in the hospital. Drs. Kim Dong-won (Kim Tae-woo)and Kim In-young (Kim Bo-kyeong) , both surgeons, are involved in investigating and conducting autopsies surrounding an unusual and recent serial killing spree of Japanese soldiers. But it’s not just Japanese soldiers, eventually it expands to a Korean child soldier, and a nurse. Things get freaky when Dong-won becomes oddly amazed to discover that his loving wife apparently has no shadow. I really can’t go into much detail here except to say that right when you think you know, you realize you didn’t, and then you realize you did, back to you really didn’t know in the first place. The best thing to do is listen for the “Psycho” music and be entertained with the twisting and contorting storyline and keep your eye on the butterfly.

As the stories unravel, more is revealed, and the characters, along with those that surround them, begin to realize that they may be at the point of no return. Just like “A Tale of Two Sisters”, you can easily become lost if you’re not paying close attention. It lacks J-horror’s unsettling irrationality, but creates an atmosphere of horror in a tranquil manner.

Not a masterpiece, but not too bad either.