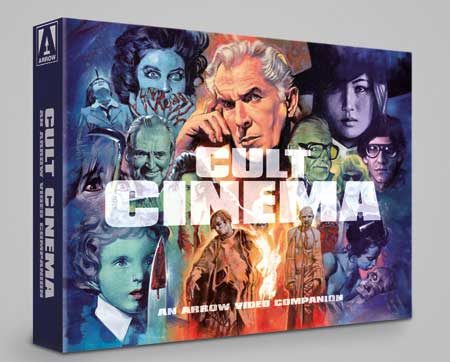 Arrow Video, established in 2009, is one of the best video companies currently releasing our favorite films.  Their UK Region B Blu-ray’s of genre titles boast exclusive and in-depth extras not seen Stateside.  Cult Cinema – An Arrow Video Companion is comprised of 20 essays that have appeared in an Arrow Video release, and includes 10 new essays written exclusively for the book.  Obviously, this pressing isn’t all verbiage.  There are many black and white images sprinkled throughout the book’s 250 pages.

The book is separated into several sections (Cult Movies, Cult Directors, Cult Actors, Cult Genres, Cult Distribution – you get the idea) and begins with film director Ben Wheatley’s introduction to cult cinema.  Recalling my own experiences with home video (A Nightmare on Elm Street was the first VHS tape that I rented and copied – sorry New Line!), I loved reading about Ben’s intro to such genre fare.  It’s always interesting to me to see how others were introduced to the same films that impacted me so greatly.  The brilliance of many of these films (i.e. Taxi Driver and Blue Velvet) can never be overstated, especially given today’s cinematic climate.  Since we were all too young to have seen most of these films in a theater, home video and cable were really the only outlets for us to consume such fare. 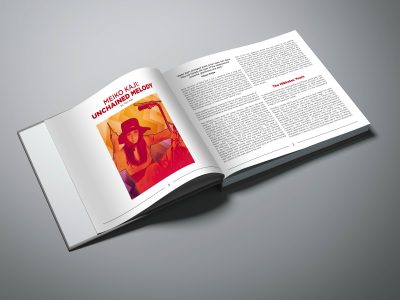 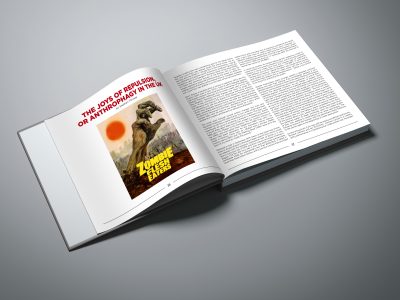 The book is comprised of the following essays:

THE JOYS OF REPULSION, OR ANTHROPHAGY IN THE UK – Stephen Thrower on Zombie Flesh Eaters

ALMOST A COMEDY – Vic Pratt on Withnail & I

NOT IN MY BACKYARD – Kenneth J. Souza on The ’Burbs

A BATTLE WITHOUT END – Tom Mes on Battle Royale

CIVILISATION VERSUS THE PRIMITIVES – Mike Sutton on Wes Craven

THE IMPORTANCE OF BEING VINCENT – David Del Valle on Vincent Price

BLOOD AND BLACK GLOVES – Michael Mackenzie on the Giallo

BEHIND BARS NO ONE CAN HEAR YOU SCREAM!

YOU BETTER WATCH OUT – Kim Newman on Christmas Horror

IT CAME FROM SUPER 8! – Douglas Weir on Super 8

OPENING THE FLOODGATES – Kevin Gilvear on the Asian DVD Explosion

Since Dario Argento is my favorite horror film director, Alan Jones automatically earns kudos for waxing nostalgia on what is rightly considered to be Mr. Argento’s best film, Deep Red.  With the introduction of Daria Nicolodi as his lead actress and the progressive rock band Goblin as the provider of the genre-changing score, Deep Red is now available uncut in all its bloody red glory.

Another lover and scribe of Mr. Argento’s is Maitland McDonagh, whose 1991 book Broken Mirrors, Broken Minds: The Dark Dreams of Dario Argento was my bible and the first book I ever owned on his career, talks about the controversy that surrounded Brian De Palma’s Dressed to Kill when it was released in 1980.

Caelum Vatnsdal writes eloquently on another favorite of mine, Canada’s David Cronenberg, in particular his original student work, and the lengths to which Vatnsdal had to go to see them in the pre-Internet days.

Mike Sutton looks at the most impactful works of Wes Craven from his humble beginnings as a Professor of Humanities: Last House on the Left (1972), The Hills Have Eyes (1977), A Nightmare on Elm Street (1984), and Scream (1996).

John Kenneth Muir takes a look at the destruction of social order in the films of George A. Romero, specifically his Dead films, the ones that he is best-known for.  His idea of the world at large says that it’s the humans who behave the worst.  This notion is reflected in the tagline to Peter Hyams’ 1981 science fiction film Outland which stated that “Even in space, the ultimate enemy is still man”.

Paul Corupe looks at one of my favorite film entities: the Canadian film industry.  1961’s The Mask, the first Canadian horror film, is discussed here.  I remember them showing this on TV in early 1982 with 3D glasses that were purchased at a fast food restaurant (Pizza Hut or Burger King, some place like that), but it really didn’t work very well.  Corupe also talks about Toronto’s David Cronenberg and Florida’s Bob Clark (who relocated to Canada) and the gems that sprang forth from the Great White North during the tax shelter haven days of the 1970’s and 1980’s.

Kim Newman brings his own voice to Lewis Jackson’s You Better Watch Out (1980) and looks at the dark side of Christmas.

A beautiful and lavishly illustrated book, Cult Cinema – An Arrow Video Companion belongs on the coffee table of every self-respecting genre lover.