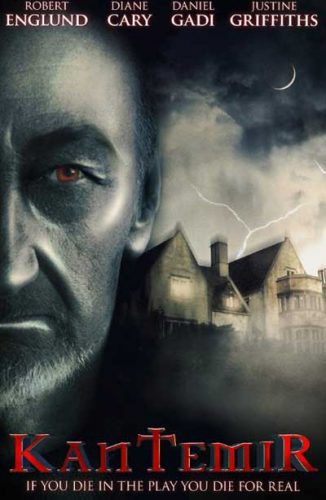 After a group of actors meet in a remote mansion to rehearse for a mysterious play they soon find out the production has much more sinister ramifications than any of them could have possibly prepared for.

Kantemir delivers the presence of iconic horror film legend Robert Englund. Movie goers that may have been under a rock for the past several decades will be best advised to reference him from the blockbuster smash franchise Nightmare on Elm Street in his unforgettable role as Freddy Kruegar. Having the opportunity to flex his thespian chops, Englund proves without a shadow of a doubt his typecasting days are long over and he’s as equally comfortable portraying the lead protagonist as he is a monumental villainous monster. 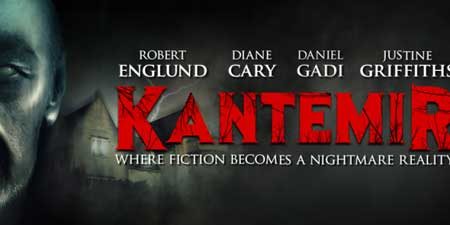 Diehard fans swiftly abandon the mental imagery of the burnt, lacerated serial killer with razor sharp talons and trade in an open mind for what is unveiled before them.Horror aficionados familiar with his brand will no question flock to Kantemir based solely on his name on the marquee. Englund even boasts a co-producer nod in this production.

In close contention to the greatest draw of this film, (right behind having a key genre player that is) is the very premise of Kantemir. The ideology of a story within a story is no question spell binding and we keep the audiences engaged from opening to final credits. It’s the sort of film that can be enjoyed time and again with a little something different lifted each and every time. As the actors grapple with their own sanity they soon realize their involvement in the production is anything but a rehearsal. Their collective lives are turned upside down as each involuntarily reenacts their character’s role in the play. At the greatest of times the actors’ disorientation and confusion dramatically accentuates the plot escalation as we cannot wait to see what possible fate may lie ahead.

The character interaction of the actors and their facades of who they were cast to play provides emphasis on the conflict. The struggling diva actress, the washed up horror icon, the estranged husband and scorned wife right up to and including the enigmatic director and innocent female lead all provides empathy and allure to the audience. There is a great deal of subtext going on and director Samuels did a brilliant job of conveying this to the audience. We get behind the characters playing the characters in an expose of life is stranger than fiction.

Some of the dialogue is delivered somewhat contrite and regrettably may distract the viewer from what may have been an otherwise compelling scene with maximum impact. It’s difficult to buy into some of the apparent oblivion that the cast cannot conceive and their reality is shaken a little too readily. Suffice to say that there is a couple of characters that are so irritating that we cannot wait for them to meet their ultimate demise. On this note along Kantemir is somewhat cliché but the average horror fan just as quickly gets over it with eager anticipation. Nothing wrong with a proven, formulaic approach as long as the payoff holds some serious merit. Englund’s performance as John is gripping as we virtually feel his struggle between what is real and what is fabricated. Shame the remainder of the cast couldn’t borrow just a sample of his acting prowess.

The death scenes are inspiring in design and I imagine created a great deal of excitement on paper. Sadly the ultimate execution lacked conviction in many cases. I feel this production would have excelled significantly with a more generous budget on special effects and make-up.

The final act seems a little drawn out and could likely have been snipped down by a few minutes. If handled with a little more finesse I can’t help but ponder if the end result would resonate much longer with the viewing audience. There is redemption however in the very final scene. Circumstances unravel with unpredictable pinosh and leaves the flood gates wide open for a sequel.

Englund’s name on the docket as actor and producer once again will no question provide a formidable market. In fact his interaction with Diane Cary is not the first we’ve witnessed. Fans of the ‘80’s alien miniseries V may recall the two spared in theatrical warfare once before.

All in all Kantemir may not be for everyone but definitely a noteworthy production worth checking out. There are certainly worse ways to invest in a Saturday afternoon.

-Three and a half out of five tombstones.