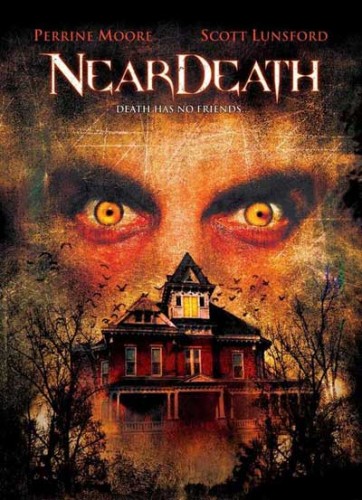 Three people researching a book about the murder of a famous actress travel to a house inhabited by ghouls. When they discover the truth behind the actress’ disappearance, they must fight for their lives to end her curse.

Directed by Joe Castro, the man who brought us Terror Toons, Near Death explores exactly how small of a budget you can give your script writers, special effects artists, and actors and still make a movie. Near Death has a hilariously horrible production value, looking like a cheesy 80’s Full Moon film despite being made in 2004. This movie could’ve been filmed on an iPhone with better effects, and I’ve seen scarier pictures made with Snapchat. Although, I suppose we could give Castro a pass because Snapchat wasn’t invented yet. 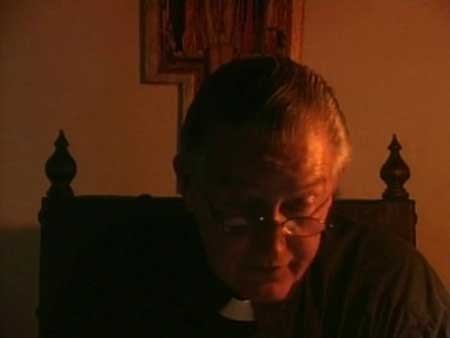 The plot revolves around a house filled with “ghouls”, which in this case means actors (who you would think would be better at acting) who have been trapped in a house after their deaths by a murderous director. They live on the flesh of the dead, doomed to forever live in the house. If they leave, they die, so they’ve arranged a local neer-do-well to bring them recently deceased corpses for their dinner. They reward him with a single gold coin. Like, a pirate gold coin. We later find out that the coin is worth around $100, for which the delivery boy gets paid $50. Thus we ask the first question of the film’s nonexistent script: who gets paid in gold coins? And one? The guy seriously goes around killing people for these weirdos for $50? Dead bodies just ain’t worth what they used to be, I guess. 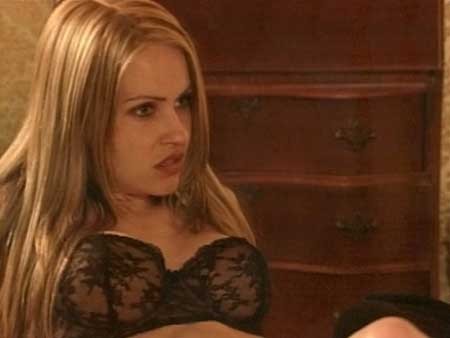 It begins to feel redundant watching these types of movies and saying the acting was bad, but holy shit was it bad. However, a lot of times the bad acting comes directly from having a horrible script. This was not the problem with Near Death. Don’t get me wrong, the script was absolutely god-awful, but the acting was just as bad. These actors could’ve made Schindler’s List look like a community theater production. The characters all had names, but I don’t remember them even immediately after watching the movie. One of the characters just yelled all of his lines loudly and angrily. The ghouls’ idea of creepily delivering their lines was pulling their teeth back from their lips and slowly. enunciating. every. word. The female main character had a bewildered look on her face throughout literally the entire movie, mirroring the confusion anyone watching the film felt. The other girl was a cross between Reese Witherspoon in Legally Blonde and a befuddled Jenny McCarthy. 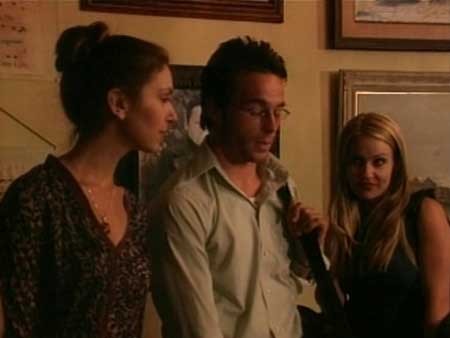 As for the writing, it was nonsense. The aforementioned gold coins are clearly German, with the year 1910 stamped on their front. The coin dealer who tells our main character where they come from states its from Germany around 1870. This is five minutes after the main character clearly tells us the coin is stamped 1910. It’s just lazy. We learn halfway through the movie that the main female character is the spitting image of the murdered actress they are there to research. How do we learn this? Because the main female character does an internet search after finding out weird things are happening in the house and discovers that the director who lived in the house is rumored to have murdered her, and she prints out the story along with a picture of the actress. Did she not research her book before traveling around the country to… research her book? Who f**king does that? It’s 2004, Google had their initial public offering in 2004. Fucking Google the research you’re trying to do before you take off in a car to visit the “scene of the crime.” The ghouls are kept away near the end of the movie while the “stars” of the movie are off solving the crime by… locking the door behind them when they go into the basement. That’s it. About 20 minutes later, they “break down the door”, which really just seems to be nudged open. Then, they’re each defeated by ripping their clearly rubber faces away from their skull. 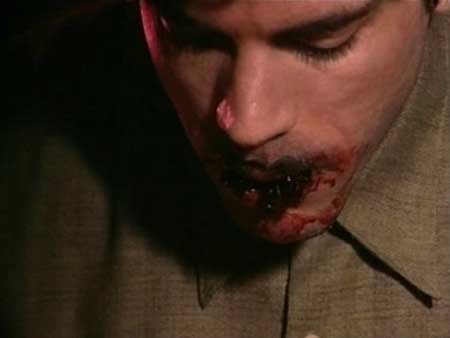 I’ve never done this in one of my reviews before, but I feel it necessary to give you some dialogue samples to show just how truly horrendous this script was. Here are some examples:

“It seems I landed the role of a lifetime… and deathtime.” – Awesome.

“There’s your milk bone, baby” while grabbing his crotch. – Classy.

“Think about it. German coin. German von Brahm (the director). Pickup truck. Could they all be connected?” – One of these things is not like the other. 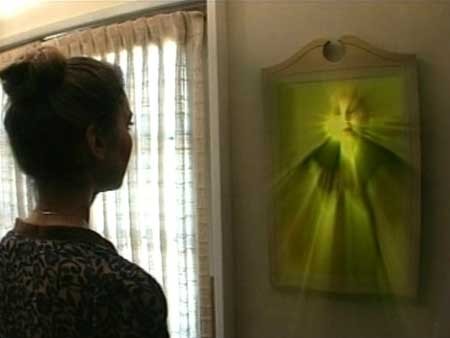 “What kinda research?” Bad guy who has been abducting and selling people holds up knife menacingly “He cuts them!” Other guy slowly turns and walks away while saying “Oh f*ck that, I’ll see you with the f*cking cops!” Guy with knife stands there and allows him to walk away unscathed.

And finally, my favorite: Dying ghoul who begins choking on blood “Ahhhhhhhwarblgarbl.”

Near Death wasn’t low budget so much as it was student-filmy. The cuts were lazy and not at all seamless, and the bad digital effects would’ve looked more at home in the Cold War era. The “spectre meter” used in the film was basically a 90’s walkie talkie with a light up meter sloppily glued to the front. The director’s idea of scares involved digitally superimposing “ghosts” over pictures and mirrors repeatedly, as in every time there’s a mirror or picture, you can bet it’ll turn into one of those ridiculous Halloween changing picture decorations. It’s truly unfortunate, because there were a few flashes of actually decent gore. There’s a scene where a man’s skull is ripped from his face, and one where a ghoul melts when he leaves the house. The melting seemed to be accomplished with a few squirts of chocolate syrup out of empty eye sockets, but it wasn’t all that bad. And then, his face exploded like the Death Star. Like, literally exploded in a weird digital explosion.

I feel legitimately bad listing this in the extreme section, as the movie was hardly extreme. There’s a scene where the ghouls slowly dismember and devour a corpse, but instead of being gross because it looks like they’re, ya know, slowly dismembering and devouring a corpse, it looks like they’re eating lumpy cranberry sauce out of a dead body while not at all caring about personal hygiene. They’re not zombies, they’re supposedly dead actors and actresses eating to live, yet they’re jamming the “guts” into their faceholes with reckless abandon while making as big a mess as possible. 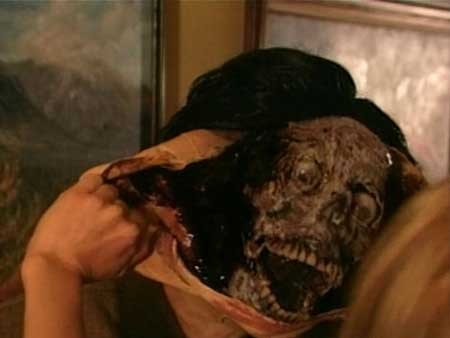 This is what a movie looks like when you have a $5000 budget and devote $20 to buying the best acting talent possible, $4950 for two decent special effects scenes, and use the rest to buy a used flip phone to record the action and put together Clipart-esque special effects. A truly awful movie, not worth the time. I would regret watching it, but then I’d have missed the main male character yelling “Dude!” when the big bad guy started choking his girlfriend. Truly a sight to behold.