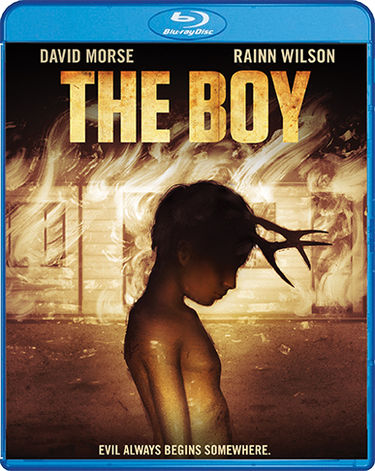 An intimate portrait of a 9-year-old sociopath’s growing fascination with death.

There were two movies released within the past year titled The Boy.  One of them, the one that this review will not be about, involved a woman in a house with a doll that may or may not be alive.  The movie that is going to be reviewed here is a story about a boy in a motel.  If that is the movie that you want to read about, feel free to continue.  This will be the review you want.

The Boy was an adaptation of a single chapter from the Clay McLeod Chapman novel Miss Corpus.  Directed by Craig William Macneill, it told the story of 9 year old Ted Henley (Jared Breeze) and his father John Henley (David Morse) as they run a dishevelled roadside motel.  Ted was slowly growing fascinated with the concept of death.  He cleaned up roadkill for small amounts of money from his father, which soon led to Ted luring animals to their deaths.  It escalated from there.  William Colby (Rainn Wilson) crashed his car when he hit a deer and recovered in the motel.  Ted took an interest in the mysterious man and their connection led to a big finale.

Children aren’t always the greatest actors, but Jared Breeze excelled in the role of Ted Henley.  He was reminiscent of a young Macaulay Culkin if Culkin was put into a horror setting.  The movie hinged on how believable his performance was.  He filled the role to the best of his ability and it worked like gangbusters.  It was easy to feel the character change happening as he drifted into the darker parts of his mind.  The performance was about understanding what was happening within the character.  It wasn’t an outward performance.  Breeze was a captivating and made the movie gripping.

Jared Breeze didn’t give the only good performance of The Boy.  David Morse managed to perfectly encapsulate the distant yet caring father.  He cared about his son but did not have a truly active role in Ted’s life.  The loss of his wife took a toll on the patriarch.  He was there physically but never there in spirit.  Rainn Wilson also turned out a solid performance as a dark figure brought into Ted’s world.  There was mystery in his background that allowed Wilson to be menacing and physically imposing.  It’s something that Rainn Wilson doesn’t normally have in his roles and was a refreshing change for the actor.

However, performances don’t always hold a movie together.  Sometimes there needs to be more than good performances to make a quality movie.  This was where the weaknesses of The Boy were.  Though the performances were good throughout, the movie was such a slow burn that it sometimes slogged along at snail like speed.  Each of the tense moments were stretched out to their extremes, going as close to too long as possible without quite reaching the limit.  Cutting some time off of these bits would have kept better flow and tension.  There are times and places to drag out tension.  Doing it every time only hurt the movie.

The conclusion of The Boy was powerful and memorable.  It paid off the material that came before it, completing Ted’s journey.  Every movie should have as satisfying an ending as this.  Each performance was spot on, from their facial expressions to their physical demeanors.  The whole long, exhausting journey through the movie was worth it for the way that they stuck the landing.  Even if you don’t like the pacing and flow of what came before it, it left on a high note.

There was much more to like about The Boy than there was to dislike.  The only weak part of the movie was the sometimes sluggish pacing that made parts of it feel like they were going on much longer than they should have.  The material and the performances were there.  It had some terrifying moments that stick with you.  It was not a perfect film and might not even crack anyone’s list of favorite horror movies.  But it managed to be a good addition to the genre, creating creepy chills out of a small boy’s struggle with death.  It was a fine film.

The Boy (2015) is now available on bluray per Shout Factory