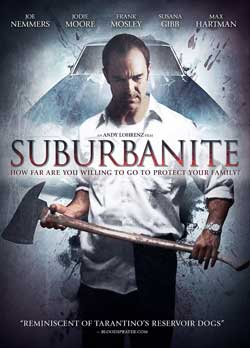 Late one night on his way home from work John falls asleep at the wheel and hits a man that is walking in the road. He takes the body home, fully intending to hide the body and cover up the incident when the unthinkable occurs. The man he hit wakes up. And now John must decide how far he is willing to go to protect his secret

There isn’t really much to say about this ultra-low budget, moral-predicament thriller. Its premise is interesting enough, but a film that is essentially a one-room conversation piece really needs the dialogue and the acting to be up to par and here they are just barely serviceable. There’s nothing explicitly bad about the film, but there is really very little to recommend it. It’s so minor a film I’ve all but forgotten it already.

The film opens in a bar with Rick (Frank Mosley) and Mack (Jodie Moore) deep in conversation. Mack wants his wife dead. Rick is the man who will do the job. There’s a fee, of course, and Rick demands money up-front. Rick is happy to oblige. We don’t really get much of a sense of why Mack wants her dead, but we do get a sense of casual detachment. There is also the sense that Mack is a bit slow off the bat. When Rick suggests rabid squirrels as a means of dispatching her, Mack exclaims, “You can do that?” Money is exchanged and the plan is in motion, “as good as done”. 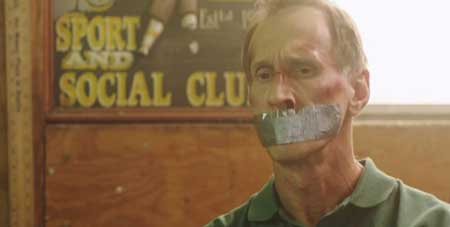 Except that it’s not. In the carpark Rick makes a phone call from which it becomes apparent that he has no intention of carrying out the deed, though he does have plans to keep the money. The conversation with Mack in the bar has been recorded. He will simply let Rick think his wife is dead long enough to collect the money, then use the recording as insurance should Mack try to squeal. At least I think that’s the plan, this movie is a little hard to follow.

Meanwhile Mack gets stumble-around drunk and stumbles out of the bar and ranting into the street. Enter John (Joe Nemmers), who is driving home. John collects Mack on the bonnet of his car, presumably killing him. Panicking, he drives the body home where he plans to dispose of it. Except Mack is not dead, just severely wounded, and John finds himself faced with the dilemma of how to proceed now that his corpse is not actually a corpse.

And so the movie settles in to a set piece that will last most of its running time: John and Mack, in John’s garage, Mack gravely wounded. Both men get to talking. “Who is the worse person?” the movie seems to be asking. Are either any good? Is there anything that could justify Mack’s desire to have his wife murdered? Ditto for John’s readiness to conceal his crime? As the two talk a certain bond seems to reveal itself, and a mutual respect evolves. This is not necessarily uninteresting ground to cover, the film just fails to engage us with the issues it is trying to portray.

The conversation unfolds and revelations come to light that change the game and the relationship between to two men. John’s wife enters the picture and now he must juggle the dying man in his garage with his domestic duties and familial obligation. To further complicate things, it seems Frank has tracked down Mack. He pays the dying man a visit when John is out. He wants his money, and he has improvised a plan to get it.

As I said before, a film of this nature relies heavily upon its acting and dialogue to really convince, but they never really do. Nemmers and Moore do respectable enough jobs as John and Mack respectively, but Mosley’s schmoozy overacting is a little hard to take. The writing never really delves into the complexities of its setup or takes it anywhere interesting. For the most part, it’s really just a bore.

You may like this film more than I did. You may dislike it more than I did, too. So unmemorable is it I had to refer to my notes to remember many of the details afterward. The experience of watching it wasn’t particularly painful, but you couldn’t pay me to watch it again.