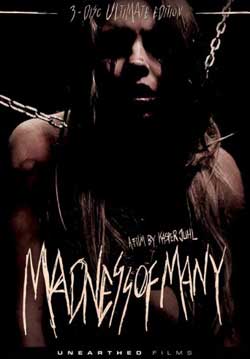 This is a story about life and death and a girl named Victoria.

Straight from the vaults of Unearthed Films, by way of Dutch writer and director Kasper Juhl, comes Madness of Many. There’s been quite a bit of buzz about this movie, some even going so far as to call it Denmark’s most controversial film. That’s a pretty high bar to set. Then again, I had seen the trailer a while back, and the images that flashed across my screen were both confusing and disturbing, to say the least. But does the film live up to the hype? I’ll have to answer that with both a yes and a no.

The story here is about a girl named Victoria. In an over-dubbed narration, she tells her story, explaining that she was abused physically, mentally, and sexually by her family (specifically her dad) ever since she could remember. Everything is always pain, she says. At age twenty-three, she finally escaped by running away from home, only to have things get even worse. This backstory is all narrated to us while we watch a young woman walk through the snow. Eventually, this young woman meets someone (we don’t see this person, but rather see from their POV), and soon she is back at their place, drinking, snorting coke, and singing…and then laying on the ground, bleeding, a broken bottle near her head. It is at this point that the narrator tells us that she is going to describe the events of the next year of her life and explains how thankful she is for all of it.

Madness of Many doesn’t follow a linear path, but instead takes a unique style in its story-telling approach. The film is divided into four chapters, and in each chapter we get a different actress playing the role of Victoria, symbolizing different parts of her life…and leading to a little bit of confusion when we are introduced to more than one new character in each section. This isn’t a deal-killer, of course – whether all of these girls are Victoria, or only one of them is, the effect is the same: horrible, disturbing, ugly things happened to this poor girl. There is some nasty torture here, eyes gouged out, guts ripped up, and assorted other bloody beatings. There’s also a lot of puke going on throughout, forced both by the puker and by others, and I can’t say that’s my cup of tea. But yes, I think this is no doubt where the label of “controversial” comes into play.

The problem here is that the style choice by Juhl is as much an attraction as it is sometimes a detriment to the film. We don’t have a main character to follow, at least not in a normal way, more of the idea of a main character while different faces appear on screen. And while Victoria narrates the film, usually she’s not telling the story from point A to point B. Instead, she’s speaking in a dark, poetic, somewhat philosophical way, and it gets repetitive very quickly. Which means we’re focusing more on the visuals, which often times appear disjointed and unclear. And so we’ve come full circle. There are highlights along the way: the shadow men are a nice touch, and in the final sequences, there is an interesting, well done scene that is no doubt dripping with symbolism. But is this an instance of too little too late?

Madness of Many is a well shot film, so it definitely has a plus there. And it is certainly not for the squeamish; if you’re into the Lucifer Valentine/VomitGore-type stuff, then yes, you’ll have a better chance of liking this movie, but otherwise it’s a toss up (gross pun, sorry). The acting is tough to judge – while the narrative sounds at times like it’s being read straight from a script, the actors rarely have lines and pretty much split their time between screaming, crying, puking, and being otherwise tortured. So it’s kind of hard to rate the actors on their performances.

In the end, we’ve got brutal visuals (lots of puke) and dark moods on top of a loose storyline. Sometimes an experimental style can work for an indie horror film (perfect recent example is Flowers), but here, not so much. I’d give Juhl another shot, without a doubt, but next time I’ll cross my fingers for a little more structure and a lot less vomit.