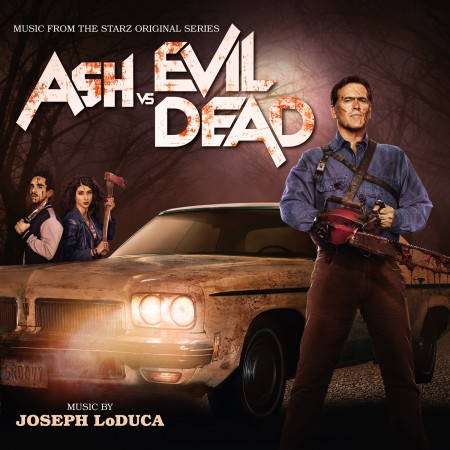 “What makes the EVIL DEAD saga unlike any other franchise is its ability to jerk the audience between horror and humor,” LoDuca stated. “Bruce coined a term for this unique genre: Splatstick. The score is like films in its approach: The music plays the straight man. That means the drama is dead serious; the action is intense; and the horror is treated with shock and dread. As a result, the humor lies in its juxtaposition to the music, and only on rare occasions does the music give in.”
Joseph LoDuca’s life-long love affair with music began with deep rock and jazz roots coming up through the rich music scene in the Motor City; to university studies of composition and guitar in New York; expanding further to absorb the musical languages of the Middle East, India, and Asia, finding fresh contexts for ancient sounds. He began his film career scoring director Sam Raimi’s EVIL DEAD Trilogy, and has continued that relationship through the top-rated television series SPARTACUS, HERCULES: THE LEGENDARY JOURNEYS, and Emmy winners THE LEGEND OF THE SEEKER and XENA: WARRIOR PRINCESS.
A Two-time EMMY® Award winner and eleven-time nominee, composer Joseph LoDuca is no stranger to large orchestra action/adventure, fantasy, and thriller music. His latest projects include the second season of the action/fantasy series THE LIBRARIANS and the supernatural thriller PAY THE GHOST.
ASH VS EVIL DEAD is the long-awaited STARZ original series and follow-up to the classic horror movie franchise THE EVIL DEAD. Bruce Campbell reprises his role as Ash, the stock boy, aging lothario and chainsaw-handed monster hunter who has spent the last 30 years avoiding responsibility, maturity and the terrors of the Evil Dead. When a Deadite plague threatens to destroy all of mankind, Ash is finally forced to face his demons – personal and literal. Destiny, it turns out, has no plans to release the unlikely hero from its “Evil” grip.
“Ash, our hero finally has his theme, a retro-lone gunman-with-a-chainsaw voiced on baritone guitar,” described LoDuca. To achieve this “I played a one-man 70’s rock band on some of the tracks. Fortunately, I also had a full orchestra and chorus on the music that appears on the album [with] Lucy Lawless and Gia Warner on vocals, and Rayse Biggs on trumpet [who] graced a few of the tracks.”
STARZ presents ASH VS EVIL DEAD Saturdays at 9pm EST. Varèse Sarabande will release the ASH VS EVIL DEAD – Original Television Soundtrack digitally December 11 and on CD December 18, 2015.
www.varesesarabande.com
Share