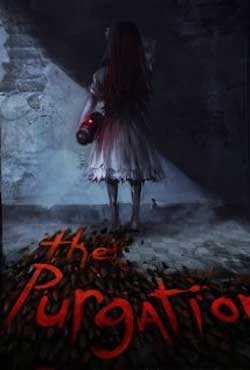 Iris thinks she’s going crazy. To stay sane, she must confront her past by revisiting the site of a childhood trauma – the old county asylum.

The Purgation, written and directed by Elaine Chu, is set in the fictional town of Black Falls. The film opens with a group of children – a young Iris (Megan Truong), Caden (Pearce Joza), Marlene (Martina D’Ovidio) and Derrick (Alex Gruenenfelder) – who are venturing unsupervised into the remains of an abandoned mental asylum. Clearly, in the world of The Purgation, people are no more sensible than in that of any other horror film. Their goal, it seems, is to make a film, and despite the creepy rumours surrounding the facility (your typical, ‘someone went crazy and killed all of their friends’ fare), they don’t appear phased.

However, as you can imagine, things quickly go downhill once they start to poke around. The apparition of a nurse, named Sister Agnes, (who could be very reminiscent of those in Silent Hill, if it was really low budget) chases them around in the dark, growling as she goes. Of course, they’re unable to escape, and each of the children is cornered, alone. It seems as if they’ve met their maker, but that would be far too easy. They survive, but we only see what happens to Iris at this point – she’s found unconscious at the entrance to the asylum by Eddie, who carries her to safety (having seemingly forgotten about the other children, one of whom is her younger brother). And that’s where The Purgation probably should have ended. But Chu is a cruel mistress.

Cut to some years in the future, and Iris (played as an adult by Tiffany Kieu) is still an inspiring filmmaker; this time, however, she’s working on a television show (the film’s summary says that it’s something similar to Ghost Hunters, but the nature of the show is never mentioned explicitly during The Purgation – you just have to make a guess based on context clues). She’s returning to Black Falls to find out what really happened to her as a child, and her co-worker, Jacob (Corey Fabyan) is excited to finally get some decent footage for their show. Iris was clearly messed up by her experience – she’s often shown taking medication and hallucinating about things that are vaguely related to the asylum – but I’m not sure how she thinks revisiting it is going to help her. But whatever. Without nonsensical motives like that, films like these wouldn’t exist.

I won’t go into too much detail about the rest of the plot, as there are supposed to be some big ‘reveals’ later on, but it’s about as good (or bad) as you can expect from this sort of thing.

It’s obvious during The Purgation that part of the terror (a word I’m using loosely in this context) comes from the fact that Iris, being a total headcase, can’t distinguish between what’s real and imagined; however, between the inconsistences in visual storytelling, bad acting and laugh-out-loud special effects, the overall atmosphere was ruined for me. There was no possibility of immersing myself in The Purgation for five minutes, let alone the full runtime, and it only became harder to pay attention as it went on. Given that Iris was supposed to be uncovering something really creepy, or at least surprising, about the asylum, I expected there to be a build-up to the climax, where she finally makes a breakthrough… But there’s no such thing. No substance. No ultimate message. Just a lot of overreaction on Iris’s part.

Even the antagonist, Sister Agnes (played by Ami Sarfati) was bland – she’s supposed to be a nun, or a nurse (she’s referred to as both) who wasn’t allowed to take her vows, and so began working at the asylum. There, she tortured her patients, removing their eyes and performing crude frontal lobe lobotomies – both of these come up later in the film in relation to the now adult Marlene (Kate Dauphin) and Derrick (Tom Walsh), but they’re hardly worth mentioning. An afterthought on Chu’s part (at best). Of course, Sister Agnes eventually goes completely mental and burns down the entire asylum. It seems at times as if Iris is hinting at the fact that, somehow, Sister Agnes didn’t actually commit the crimes she was accused of, but it’s fairly obvious that she did. Overall, Sister Agnes is just the amalgamation of a load of horror tropes – she definitely had the potential to be scary, but came across as totally ridiculous instead.

The character of Caden, who is only present during the opening scenes of the film, is supposed to be imaginary, yet he frequently interacts with the physical world. The other children even respond to his comments occasionally. While the film does a lot to set up the fact that Caden doesn’t actually exist during the opening scenes (for example, when he doesn’t appear in the rear view mirror of Eddie’s car) the lack of consistency doesn’t make it very believable.

I wasn’t a fan of the dialogue, either, especially when it came to the children. Even a stellar cast would have had a hard time dressing it up, and, while the actors weren’t all that bad, their performances couldn’t save a script that was average at best. There was a lot of exposition from the characters themselves, which shouldn’t be necessary in such a visual medium. And yet, somehow, the backstory is a little wishy washy – it felt as if a lot of what happened was just thrown in to up the scare factor, rather than having a genuine place within the plot. For example, the religious overtones, which were extremely heavy-handed in some places, have little impact and could be removed completely. I didn’t really ‘get’ what was going on throughout, and the ending seemed to come out of nowhere. There wasn’t any genuine closure, despite best attempts, (I say this because that was the whole point of the film, as far as Iris is concerned) so I was fairly disappointed.

So, if you’ve got 75 minutes to waste, and you don’t particularly value your time, then maybe it’s worth sitting down for The Purgation. If not, then trust me – don’t bother. Go outside. You’re better than this.