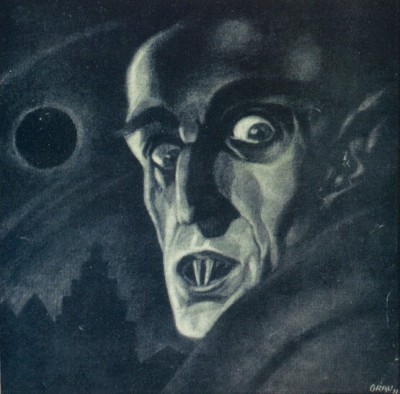 Friedrich Wilhelm Murnau’s 1922 film Nosferatu: A Symphony of Horror holds a special place for me as I become aware of it when I was just two years into my love of the horror film genre. I had read about the film in Darrell W. Moore’s “The Best, Worst, and Most Unusual Horror Films,” a book that I purchased in 1983 which became my bible for all things horror.

On Independence Day in 1985, after making a VHS copy of Wes Craven’s A Nightmare on Elm Street (sorry Media Home Entertainment!), I headed to Holly Park Video (which was destroyed in a 1994 fire, unfortunately) with the hope of finding another classic horror film to savor on tape. While looking through the titles I noticed a VHS prerecorded copy of Nosferatu by Kartes Video Communications through their Film Classics Video label on VHS sitting on the shelf, but it was only available for purchase, not for rental. 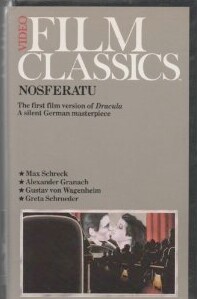 The oversized clamshell box caught my eye because it retailed for $19.95, far lower than the $79.95 price tag of VHS tapes that were sold only to rental stores. I eagerly bought it up and was struck by the fact that although the film was sixty-three years old, it was still very effective and creepy.

I was not the only person to have been affected by the film. Louis J. Pesci, the author of the beautiful and lavishly illustrated book Nosferatu: The Untold Origin, is another one of those people, and he has created a beautiful book all about Count Orlok. 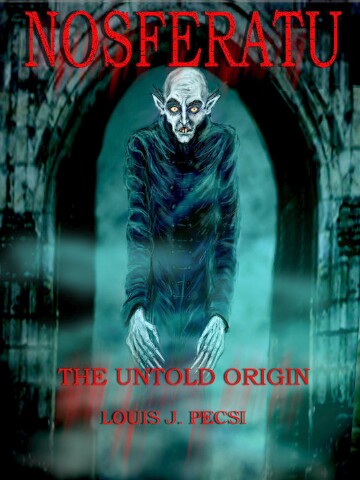 A work of fiction from the author’s imagination with historical embellishment, Nosferatu: The Untold Origin begins in the 15th century in Europe wherein Sigismund, the Holy Roman Emperor at the time, issues a decree that practitioners of witchcraft and all peoples whose beliefs run contrary to Roman Catholicism be burned at the stake. Count Orlok, believing wholeheartedly in The Word of God, seeks out Elsa the Witch and tries to convince her to renounce her evil ways or risk certain death. She chooses the latter, knowing full well that she will place a curse on him and haunt him for all eternity.

What follows is a creepy and very atmospheric tale of the life of Count Orlok, who must now roam the earth looking for human blood to keep himself going. A moment of palpable tension occurs when the Orlok, weak from a lack of human blood, lies in a dungeon as a large spider takes up residence over one of his opened eyes for eight hours. Get it off!!!!

Below are two samples from the book which is illustrated with hundreds of similarly beautiful and truly frightening images, all designed and drawn by Mr. Pecsi. 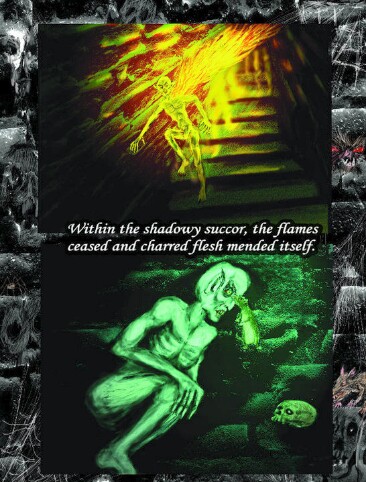 What makes the story such a stand-out is how it begins with Orlok as a human being, believing whole-heartedly in the Emperor’s decree, and subsequently finding himself to be cursed for all eternity by Elsa, the witch whom he tries to persuade to change her mind and give up her witchcraft.

The text is very well-written and keeps you guessing as to what is around the corner for Count Orlok. I must admit that the book gave me a great deal of sympathy for this poor man who has become the stuff of horror film legend, and whose look has influenced so many vampires, among them Klaus Kinski and Reggie Nalder in Nosferatu the Vampire (1979) and Salem’s Lot (1979) respectively. There are plenty of truly creepy images in this book, primarily the depictions of Elsa the Witch, looking horrific after she is hanged from a tree. The images are so creepy that they remind me of Andrew Prewett’s cover art for the British horror sound effects records which always unnerved me when I was a child due to their explicit depictions of torture. 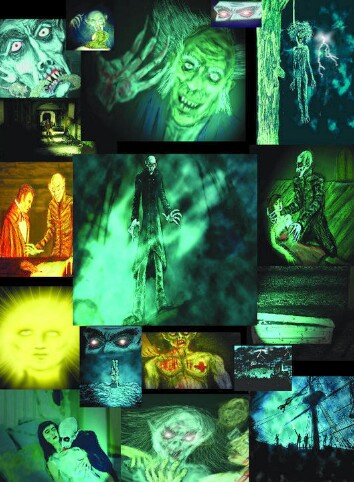 Max Schreck’s portrayal of Nosferatu in the 1922 film version is arguably the most unnerving screen version of the vampire and has haunted countless nightmares over the past eighty years. To write a book about his origins was a truly terrific maneuver. I highly recommend that you pick up a copy.

You can order the book here. There are also some neat posters and accessories that can be purchased here in addition to the book, so be sure to have a look!