Home | The Daughter of Frankenstein’s Monster Will Be Among Us for Halloween!

The Daughter of Frankenstein’s Monster Will Be Among Us for Halloween! 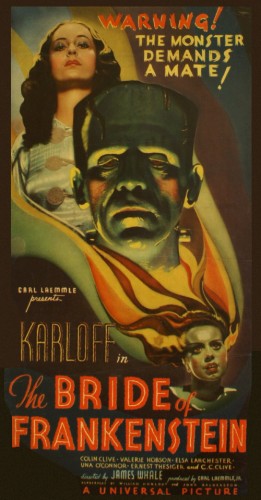 A double feature of two Universal classics will be upon Los Angeles on Mischief Night. James Whale’s 1935 film The Bride of Frankenstein, the sequel to the 1931 film Frankenstein which he also directed, stars Boris Karloff, Colin Clive and Elsa Lanchester and will be shown at the Ahrya Fine Arts Theater. The highly-lauded follow-up to one of cinema’s most famous tales runs 75 minutes and will be screened on Friday, October 30th, 2015 at 7:30 pm.

Boris Karloff’s daughter, Sara Karloff, is scheduled to appear at the screening and is due to partake in a post-screening Q & A for a discussion on the making of the film. Please be sure the check back with the website/theatre in regards to personal appearances/changing schedules so as to avoid disappointment.

Following this presentation will be Charles Barton’s 1948 comedy Abbott and Costello Meet Frankenstein.

80TH Anniversary screening of THE BRIDE OF FRANKENSTEIN

The original Frankenstein, directed by British-born auteur James Whale, helped to inaugurate the horror genre in the sound era. Yet Whale‘s The Bride of Frankenstein from 1935 is a rare example of a sequel that surpasses the original. Pauline Kael called Bride a “macabre comedy classic.“ Boris Karloff revisits his memorable role as the Monster and adds revealing new touches to the portrait. Elsa Lanchester plays the Bride and also appears as author Mary Shelley in an ingenious prologue. Kael wrote of Lanchester in this movie, “She won our hearts forever.“ The cast also includes Colin Clive, Valerie Hobson, Ernest Thesiger, Una O’Connor, and Dwight Frye.

As a special bonus feature, we will also present ABBOTT AND COSTELLO MEET FRANKENSTEIN from 1948. This was the comedy duo‘s best effort to re-interpret classic Hollywood genres in their own zany style. Leonard Maltin wrote, “[this] all-time great horror-comedy still works beautifully.“ Lon Chaney Jr. and Bela Lugosi co-star. Enjoy this Halloween double feature – two movies for the price of one.