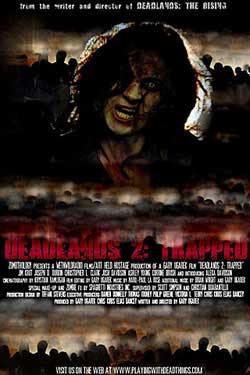 When the US gov’t tests a highly secret nerve gas on the residents of Hagerstown, MD the side effects bring down a world of horrors for 6 strangers trapped inside a movie theater

QUICK FIX:
Those nutty government bastards are at it again – a shady agency led by the helicopter zombie from the original DAWN OF THE DEAD who is our flick’s mad scientist here unleashes a toxic gas on the unsuspecting townsfolk of Hagerstown, MD. In reality, the whole town would probably have just croaked over dead leaving a cover-up to be spun from there. Thankfully for us, this is a horror movie, so what do you think the gas does to the townsfolk? That’s right – those who ingest the sh*t turn into zombies!

At the heart at all are three friends, one of whom has been bitten by a zombie. The other two rush him to the closest place they can find for help – a movie theater that’s closed for the night. Lucky for them, a couple of employees are still hanging around and let the others in. All’s well now, right? Ha ha, fat chance – the zombies sniff them out and the epic battle to survive the night begins!!

RAMBLINGS:
Back in the day when I first got back into the reviewing gig again a few years ago, one of the first movies sent to me was Gary Ugarek’s first flick, DEADLANDS: THE RISING. I was all set to rip it to shreds for everything from a slow pace to the flick’s micro budget to not enough gore for a zombie movie to the gawdawful acting like many other reviewers were doing at the time, but then my inner voice kicked in and gave me pause, as if maybe there was something in my rush to get through it that I had looked over. I’m glad I listened to that inner voice, as it made me remember how some people reacted to the first short I wrote that actually got filmed, and it awakened something a little deeper down inside me – like maybe I should give it more thought and give first-timers a little more slack before tearing their movie apart.

See, for all the trappings of low-to-no budget filmmaking, there’s one thing that makes some flicks stand out more than others no matter what – the story. If the story is good, everything else can be dealt with easily. Around the same time as watching THE RISING, I also had copies of HIDE & CREEP, and THE GRAND HORROR to watch for review, and they all had the same thing in common back then and even now – they had an awesome story that at times rose epically above the budget they had to shoot it. Sometimes that also hurt all three flicks, but in the end the filmmakers rose to the occasion and got their points across as best they could.

And now while TRAPPED isn’t what I’d call a sequel to THE RISING in any way; it was very clever of whomever came up with the idea to link this one to the first DEADLANDS flick. After all, both deal with zombies, and both have epic stories to tell.

Ugarek has improved leaps and bounds from the first flick to this one, both technically and through his storytelling ability. The one thing that I have to address though on the odd chance he reads this review that I do hold him accountable for and is really my only real gripe with this movie – the acting. I know that in low budget indie horror there aren’t going to be very many, if any, classically trained Pacino types. Hell, there might not even be any Richard Lynches to be found these days either. And I will give a non-Hollyweird movie a ton of slack when it comes to acting.

BUT, when you don’t have the money for a whole lotta action and story really counts, why in the blue hell would you cast the two who are so much more talented and comfortable in front of the camera in secondary roles while giving the two dudes recall Paul Walker and Hayden Christiansen the leads??? It’s frustrating as hell sometimes sitting through their dialogue.

LAST WORDS:
It’s available on Amazon.com right now, this much I know. But me personally? I’ll be preordering the Extended and Unrated edition that comes out October 19th – just in time to make it into my rotation before the greatest holiday of all which falls on the 31st. Those of you out there that want to get your zombie fix on with a low-budget, story-driven flick reminiscent of RETURN OF THE LIVING DEAD or DEMONS, then DEADLANDS 2: TRAPPED is going to be just what you need to subdue that monkey on your back!