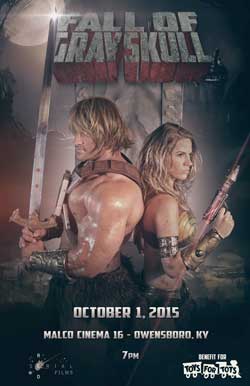 Skeletor and the forces of evil have overwhelmed He-Man and his heroic warriors and have seemingly taken over Castle Grayskull. It seems that Teela and an unlikely ally are the only ones left standing to stop him from achieving total victory and destroying all the forces of good on Eternia. Will they succeed or will Skeletor finally achieve his goal of becoming the undisputed Master of the Universe?

When I was a kid when I wasn’t watching horror films I spent my time watching cartoons such as Transformers, G.I. Joe, and Thundercats. My favorite though, was without a doubt He-Man and The Masters of the Universe. I loved the cartoon and had pretty much all of the action figures, play sets, and accessories that went along with the toy line, so I was pretty stoked about seeing Daniel Benedict’s short fan film Fall of Grayskull and let me just say that it is absolutely awesome in every possible way. It is well-written with a compelling storyline, has some great actors and costuming, and does an excellent job of capturing the very essence of The Masters of the Universe. Not only is it the best Masters of the Universe fan film I have ever seen, but it is just the greatest overall fan film to come along in a very long time, period. 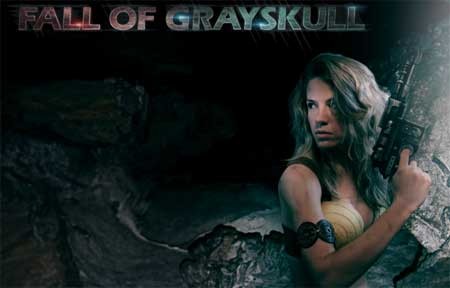 I loved the storyline and thought that it was very interesting. Essentially what we have here is that Skeletor has finally defeated He-Man and has finally achieved his goal of taking over Castle Grayskull (there is actually a comic book prelude that goes along with the film that tells how he was able to do this). With a powerless He-Man at Skeletor’s mercy and most of the heroic warriors dead it falls on Teela’s shoulder’s to save the day. What transpires is an awesome little action-packed short film that seems to be plucked right out of the pages of a Masters of the Universe comic book or one of the episodes of the cartoon. There is a lot going on in this film and I loved every minute of it. It is obvious that Benedict has a lot of love and a great deal of passion when it comes to everything Masters of the Universe (his love for the characters reminds me of my own personal love and obsession with Spider-Man) and it definitely shows with this film. It is obvious that he put a lot of love, hard work, and dedication into this project (as did everyone involved) and the results are nothing less than breath-taking.

Another huge strength of the film was the fact that it looks gorgeous. I’m not going to lie, in my opinion it looks just as good-if not better-than any big-budgeted Hollywood production. I was amazed by how awesome everything looks and there were several times where I thought that I was actually inside Castle Grayskull itself during the course of the movie. The costumes are excellent and everyone looks fabulous. Several of the classic characters make an appearance including He-Man, Skeletor, Teela, Evil Lyn, Tri-Klops, and several others and they all look great (sadly though my personal favorite Mekaneck doesn’t show up. What are you laughing for? I love Mekaneck! ). For me watching this movie was like watching a live-action episode of the cartoon and for a while I was transported back to 1985 and was once again a ten-year-old boy who didn’t have a care in the world. For that I thank Benedict and everyone involved with this wonderful film.

Did I mention that the cast is excellent? Brian Cage rules as He-Man, Kevin Clark kicks serious ass as Skeletor, and Mercedez Varble rules as Teela. I have had the pleasure of working with Louisa Torres and Allie Hendrick (who are both wonderful as Evil-Lyn and Shadow Weaver) in the past (Louisa was in the short film I wrote called Lucky and both of them were in the movie I co-wrote called Volumes of Blood) and they both deliver this time around as usual. Lindsey Menche is awesome as the Sorceress (she looks and sounds just like her cartoon counterpart) and I enjoyed John Thomas Priar as Prince Adam. Without a doubt though, my personal favorite was Johnny Bilson as Tri-Klops. He IS Tri-Klops and owns every scene that he is in. Tri-Klops has always been one of my favorite MOTU characters and Bilson does a perfect job of bringing the character to life. There is not one bad performance to be found in the entire film and I applaud everyone involved for doing such an excellent job.

Fall of Grayskull is just a brilliant fan film and I had an absolute blast watching it. I can’t say a single negative thing about it and think that viewers will agree with me. I loved everything about it and thought that it was flawless (stay tuned after the credits as there is an absolutely kick ass scene that follows that makes me really hope that there will be a sequel). To me this is what filmmaking is all about and if you are a fan of the Masters of the Universe (or great films in general) do yourself a favor and run, don’t walk, to the theater where this film is screening as soon as possible to check it out. You will not be disappointed. Highly recommended!