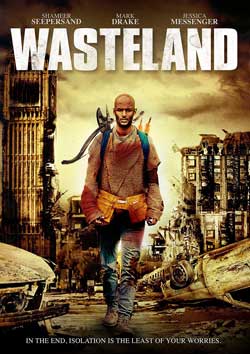 A virus-created apocalypse has turned nearly everyone into disease-infected zombies. The story follows Scott Miller’s battle for survival while he searches for food and water, seeks out other uninfected people, and waits for his soulmate to return.

Wasteland is yet another zombie film out of the United Kingdom. Directed by Tom Wadlow and written by Tommy Draper, Wasteland is the story of Scott Miller’s life after a virus-created apocalypse has devastated civilization. The film follows our hero, a former electrician, played by Shameer Seepersand, who is on screen nearly 100% of the time.

During the first half of the film, Scott wanders the countryside in search of food and water while encountering occasional zombies. This activity is efficiently and effectively depicted using a montage of scenes showing Scott evading and dispatching zombies in assorted settings and assorted ways. We also learn through a series of flashbacks, that just prior to the outbreak, Scott had met his soulmate, Beth, played by Jessica Messenger. However, when he proposes, Beth refuses to make a decision about her future. Shortly thereafter, the virus hits and Beth and Scott find their way to an isolated, one-room shack in which they hole up, away from the remnants of the population. However, Beth can’t stand the isolation and not knowing what’s happened to her family, so in the middle of night, she sneaks out of the dwelling and heads for London. Scott feels he has to stay near the shack in case Beth returns and needs him.

At this point we’ve seen no other living, uninfected humans except in flashbacks. But after Beth leaves, Scott builds a homemade CB radio and communicates with a couple, George and Barbara, who become the apocalyptic version of his virtual friends. Eventually, George and Barbara are infected and Scott’s solitude is complete.

In a very short middle act, Beth returns from London and reunites with Scott. She is much the worse for wear, and tells Scott about the violent anarchy she experienced in London. It was everyone for themselves and no one was safe. Since returning, she feels secure with her quiet and relatively peaceful existence with Scott. But their challenges are not over. Later on, we meet two uninfected people, Max (Mark Drake) and Lolli (Rachel Benson), who enter the story as unknowns and provide even more challenges for Scott to overcome in order to survive.

The first time I watched Wasteland, I was pretty unimpressed. It seemed like just another zombie flick, and a boring one at that. But on the second viewing I realized I had completely missed the film’s point. This is definitely not an exciting, action-packed, zombie flick. It is a slow burn of a film that explores the end-of-the-world questions: What will you live for when everything and everyone is gone? Will survival, in and of itself, be enough motivation? What about a soulmate? “I love you, I can’t live without you” is the theme of countless movies, but what if everyone is gone? When is self-survival the driver of all behaviors? When does “I have to get mine before you get yours” or “do unto others before they do unto you” give way to a priority of group survival and unity? Or even the survival of others?

The filmmakers do an effective job of exploring these questions. My hat’s off to them for maintaining their focus rather than degenerating into a stereotypical, action-adventure, zombie movie. Instead, they explore the conflict between the themes of survival of the individual at all costs vs. survival of the group vs. survival of the species.

Wasteland is a product of Lightfilms Ltd, with a budget of £500,000. Lightfilms displays a statement on its website that reads, “Our core passion is filmmaking. … Low budget filmmaking with high budget ambition.” Prior to Wasteland, most of the filmmaking experience of many of the cast and crew comes from short films. Even so, they seem to have nicely made the transition to full-length feature.

The acting was spot on for what was needed in this story. The actors with the four main roles – Shameer Seepersand, Jessica Messenger, Rachel Benson, and Mark Drake – enhanced the believability of the circumstances and motivations of the story and the charactgers. Shameer Seepersand, in particular, demonstrated the range necessary for the screen time he had and the wide arc his character followed.

In my view, the CGI was lacking, possibly as a result of the budget, and interrupted my focus at times. However, the practical effects were topnotch and had me wondering how in the world they created the depth in some of the wounds and injuries.

My second watch of this film is what did the trick for me and completely changed my opinion of Wasteland. Still, if you are looking for a standard zombie film, you might want to steer away. On the other hand, if you like movies with well-developed relationships and the thought provoking exploration of survival themes, I think you’ll enjoy Wasteland.

I give it 3 out of 5 virus-infected zombies. But that’s just me.