Someone asked me recently why I liked horror movies. They asked me that because they do not. While I can appreciate one’s personal preferences, the question struck me, as I have always liked horror. While I may not have been on this Earth as long as the undead, I have seen many a horror flick in my short time here.

The short answer to the question is simple. Fantastical escapism. Same reason I like any movie, really. The films take me away from my (albeit sometimes horrible) life and inject me into events that have nothing to do with my problems. Suddenly my job seems trivial when compared to a zombie uprising. But this also occurs with comedy, drama, thriller and what little sci-fi I indulge in. Movies, as most forms of art do, start from nothing; a blank canvas or computer screen. An idea is born and manifests in to a product with some degree of aesthetic value, ranging anywhere from Dude, Where’s My Car? to Inception (I will let you decide which ends of the “good/bad” spectrum those examples lie. However, if they are not on opposite ends for you, I question your ability to discern good from bad). That something can be formed from the intangible into an emotionally stirring experience that might just stick with me for an indeterminate length of time is no small feat that should be appreciated. Appreciated no matter if it is a piece of music, abstract painting or a 90 minute film about eating brains.

Still, why horror? What delight can be derived from murder, zombies, vampires (not shiny vampires) and other things of that ilk? Does liking this genre mean that I am deranged? More likely to commit some of the horrifying events I have witnessed on screen? While I doubt those possibilities, according to Facebook, it does mean I will last 1 year after the zombies take over. Horror, to me, is one of the hardest film genres to pull off successfully. Especially today, with the constant wars, casual swearing on commercial television and the various creatures found in fast food establishments. We have all become desensitized to certain things.

A lot of the time, the subject of a horror film has little to do with something that is possible in real life, whether it’s a demonic creature attack or a hockey masked psychopath who refuses to die, no matter what science dictates. If a group of filmmakers can suck me in and make me believe those things, then that’s nothing short of awesome in my book. It’s similar to what fans of Harry Potter and Lord of the Rings that have orgasms when they see magic wands and hear the word “precious” go through. That’s their nerdy thing, and others may not understand it.

One the other side of the coin, horror films often depict events that are entirely plausible and in some cases actually happened. This makes the film even more effective. Take the 1974 classic The Texas Chain Saw Massacre. Despite the narration, the film isn’t really based on a true story. It is very loosely based on an actual serial killer. However, watching the film, nothing in it is impossible. Tobe Hooper knew that, and telling the viewer that it did happen adds another level of horror to the experience, perhaps even giving it another dimension: realism. While the prospect of running in to a family of cannibals with a penchant for power tools my not sit well with some folks, I rest comfortably knowing that having seen this film, I am immediately suspicious of hitchhiking rubes with Polaroid cameras. To continue to use this film as an example, it’s hard not to like it. Marilyn Burns is fantastic. Its almost documentary feel and grainy photography practically insist that what you are watching is real. Chainsaw is filmmaking genius and the fact that I am discussing it over 35 years after its release proves that.

What helps to enjoy a horror film, for those of you who don’t (you’re on the wrong site), is the knowledge that what is happening isn’t really happening. Even if it really happened, it isn’t now. It can only be so frightening. Similar to a dream (with the possible exception of those that take place on Elm Street), you eventually resign to the fact that it was just a movie. The bonus is, even knowing that, if the film still frightened or repulsed you, what you just watched was a good film. And there is absolutely nothing wrong with watching a good film. 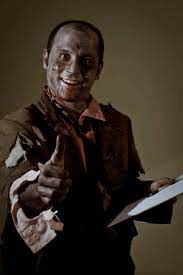