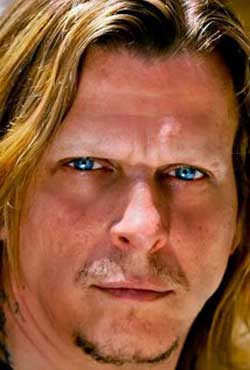 Eric Nyenhuis is passionate about his work and life. He has several huge projects in the works including “Star Trek: Equinox” and one of the biggest events of the summer. Nyenhuis is bring the entire cast of “The Warriors” back together for a massive festival event in Coney Island, “The Warriors turf.” The fans will get have the chance of a lifetime to meet the cast. Nyenhuis along with Artist Pauly Popolizio. Nyenhuis is incredibly talented and excited about “The Warriors” reuniting. His true passion shows through as he took time to speak with me for a Horrornews.net Exclusive. You can also find all the links to Eric’s websites and people he believes in one hundred percent.

Tickets are going Fast, so here is the link to purchase tickets www.brownpapertickets.com/event/2014293

Why did you decide to bring “The Warriors” back together at Coney Island?

First of all it was a no brainer I was doing some test shows with Steve Grillo from The Howard Stern Show for a new radio show and I invited four of the warriors in two separate dates and the response was unreal. We received emails, text and we want to come meet them and we want to come see them. It just turned epidemic. “The Warriors” are so embraced and beloved by everybody. I mean I really reignited “The Warriors” to the point where NetFlix put them back on television. This movie is still very important to millions of people.

What makes “The Warriors” such a fan-based and loved film?

You know what I say and I say it a lot because it’s absolutely true in my case. I’ve got it on blu-ray, I’ve got it DVD, but if it goes on television I am still going to stop and watch it. The cool thing is that after you get to meet all these guys, you actually get to sit and watch the movie with them which was something I always had on my bucket list even when I was twelve years old back in 1979. I said I would really love to watch this movie with the cast and that came true for me back in May. Now I get to bring them back to Coney and we will watch the movie with the cast. We’ve got one of the biggest hardcore bands in New York, SICK OF IT ALL playing with the GOTHAM CITY MAHSERS. This is the first time in thirty seven years that every one of The Furies that’s alive is coming together. 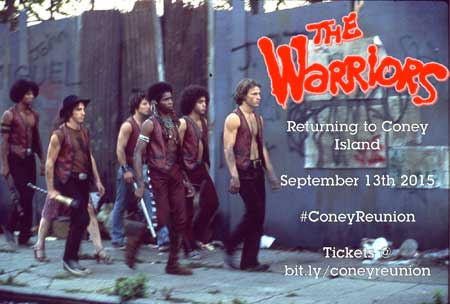 What do you think it means to the fans to have this reunion at Coney Island?

In one word, everything. I still get emails about the last reunion I put together and people waited their whole lives with hopes this would happen. I have made it a reality. I called in favors and laid out a bunch of my own personal money. I am a machine, twenty hours a day, I mean I’m producing a new “Star Trek” series right now and I am still taking my time out and people that work with me. My new artist Pauly Popolizio has just been so instrumental in getting the word out. We are going to be on the cover of the Village Voice on September 2nd and two issues of Rolling Stone magazine.

There will be a film screening, an autograph signings, a panel discussion and photo-ops.

And a cosplay contest for people who want to dress up like the characters. Whoever’s got the best costume wins a signed autographed vest. Three of the warriors will be judging the contest. I’ve got mine in my office and everybody that walks in always has some kind of cute little “Warriors” saying, “Come out and play.” It is just epidemic and that movie has all of these guys immortal. This movies is going to be around a hundred years after we are gone.

“The Warriors” transcends other films, music and even art.

Not just other films, other music. Look at Wu-Tang Clan, look at Ice-T, look at all these rap groups and some of these skits. Even “Family Guy,” everybody brings “The Warriors” into what they’re doing because they know it’s poignant and its inspiring. You’re talking about nine guys that were the epitome of cool in 1979. All they wanted to do was go home and for a 127 minutes everybody in the audience for every showing, all they wanted to do was see them come home. On September 13th, the boys are coming home for the last time. That’s big! 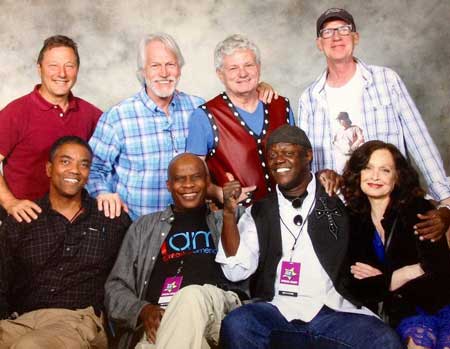 What type of new merchandise can the fans look forward to?

Yes, we actually just posted on our Facebook page, the brand new exclusive Coney Island reunion t-shirt that is only going to be available for the reunion. We are doing a twelve inch Michael Beck Swan sculpture in his Warriors outfit.

How do you feel about all the murals going up in Coney Island? 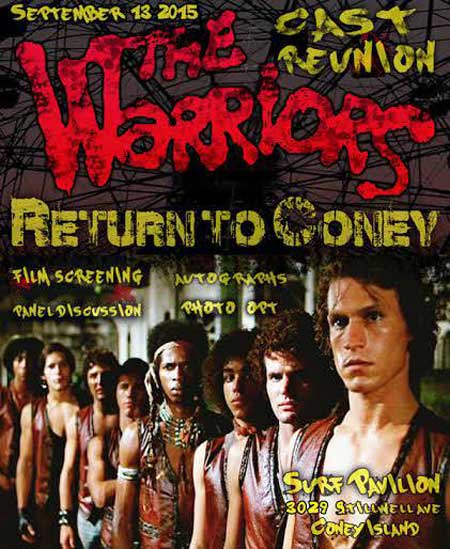 How do you feel about all the fans coming together?

You know what is even better than the cast coming together, all these people on Facebook and social media that love “The Warriors” they all come and meet each other for the first time face to face and its honest to God like a Facebook live reunion. Were all great friends and we are all there to embrace the movie. The comraderies between the fans is just amazing.

You are also working on “Star Trek: Equinox” and David Harris is in it, what can you tell us about it and why did you decide to work on “Star Trek”

Yes, David Harris and Michael Beck is actually going to be playing the President of the United Federations of Planets which we haven’t announced yet so you have an exclusive there. I have loved “Star Trek” longer than I have been alive it seems. Having John Savage at the helm, I mean he is iconic Hollywood royalty. Gary Lockwood is finally putting the “Star Trek” uniform back on after forty seven years. It’s all great timing and who doesn’t love “Star Trek?” You know for me “Star Trek” it was never about special effects and I appreciate what J.J. Abrams did with the “Star Trek” franchise. For me it was always about the story, it’s how people treat other people, how we deal with racism, drug abuse and growing old. It is about everyday things being dealt with. “Star Trek” is great as long as people remember it is all about the story, it was never about special effects. I love what J.J. did, but to me it wasn’t “Star Trek,” it was just a great Science Fiction film. Everything about it is just incredible. The new scripts are being embraced by the powers that be.

Do you think there has been any other film that has had this type of impact “The Warriors” have had?

What challenges are you facing with all the projects going on?

Burn out, just burn out. I mean I pace myself twenty hours a day. I’m never home. I haven’t been home in six weeks. Then I am home for a week and then I’m back on the road again. Ijust did “Almost Mercy” which is on Netflix right now. I play the father. I’m the war chief of this little adventure. Michael Beck calls me the 11th Warrior.

What advice would you give to people in the entertainment industry that would like to have a long term career?

The first thing you have to do is understand the business. My first suggestion is study with Thomas G. Waites, (www.facebook.com/TGWacting)The Fox (THE WARRIORS), you can reach him on Facebook. He is the number one acting coach in New York right now. There is a series by Stanley Livingston he has a series called “The Business of Acting.” Acting coaches will teach you how to act, how to speak, how to present yourself, how to read scripts and how to do dialogues and write monologues. But Stanley Livingston from “My Three Sons” actually discusses the business of acting because there is a business side to it. How to get an agent, how to present yourself and how to work within the industry. It is not an easy industry, if it was everybody would do it.

How did you get into acting and why did you decide to become an actor?

Well according to my mother, I have been acting since I was three years old and I hosted Retro Radio Live and when my contract expired, John Savage said if you don’t get into acting you are wasting your talent. I found Ernest L. Thomas in Los Angeles, he became my first acting coach. Then I went onto to Richard Hatch from “Battlestar Gallactica” and then eventually signed to John Savage and honest to God, I have never been on an audition in my life. I just keep working. I’m getting such great reviews on “Almost Mercy” right now (It is an incredible film) 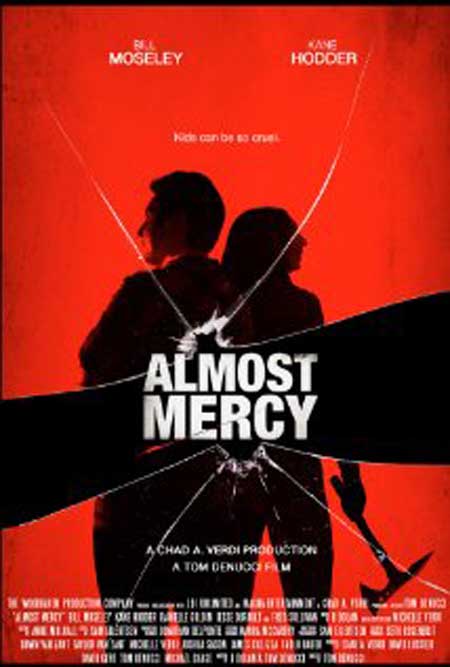 What do you want to say to the fans of “The Warriors?”

Just come out and play on September 13th. I hope to see everybody there.

Tickets are going Fast, so here is the link to purchase tickets www.brownpapertickets.com/event/2014293

Here are a few updates for those of you interested in attending the Warriors/Furies cast reunion event in Coney Island on September 13th. Tickets are now on sale at Surf & Stillwell in Coney Island and online atwww.brownpapertickets.com/event/2014293