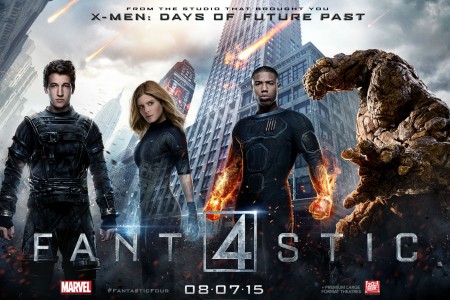 A contemporary re-imagining of Marvel’s original and longest-running superhero team, this centers on four young outsiders who teleport to an alternate and dangerous universe, which alters their physical form in shocking ways. Their lives irrevocably upended, the team must learn to harness their daunting new abilities and work together to save Earth from a former friend turned enemy.

The Fantastic Four were last seen back in 2007 in director Tim Story’s flawed, but energetic Fantastic Four: Rise Of The Silver Surfer (2007). Although it was a financial success, it (along with its 2005 predecessor), was a critical failure, and the four were no more. But since it seems like every studio has to have a superhero franchise nowadays, 20th Century Fox is at it again with its latest attempt to bring the Fantastic Four to the forefront of superhero films. Sadly, once again it seems that they have no real idea on how to produce a good film featuring the heroic quartet.

Fantastic Four opens with a very young Reed Richards (Owen Judge), attempting to explain his idea for a transporter to his 6th grade Science class, but he’s summarily shot down by his teacher Mr. Kenny (Dan Castellaneta). Cut to later that evening, where we find Reed attempting to steal a power converter from the local junkyard, which just happens to be run by the Grimm family. Young Ben Grimm (Evan Hannemann), goes out to investigate the noise, and finds Reed hiding in a car. But Ben recognizes Reed instantly as the weird kid in his Science class, and once Reed tells him what he needs the converter for, he agrees to help him out. Of course, the experiment fails spectacularly – but a new friendship is born. 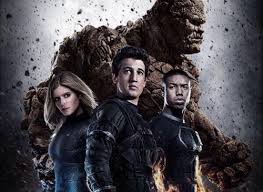 Cut to 10 years later, Reed (Miles Teller) & Ben (Jamie Bell) are still best buddies, and finally have a working prototype of the teleporter to display at the High School Science fair. They manage to teleport a toy airplane somewhere beyond the confines of planet Earth, and bring it back covered in an odd sandy substance. But the same Science teacher deems it to be a cheap magic trick, and dismisses it. But it catches the eye of Dr. Franklin Storm (Reg E. Cathey) and his adopted daughter Sue Storm (Kate Mara). Dr. Storm immediately identifies Reed as a genius, and offers him a full scholarship with the Baxter Organization. Reed accepts and immediately takes up space in the Baxter building, where a much larger version of his teleporter is being built. It seems that Reed has figured out something that the collected geniuses of the Baxter Organization couldn’t – he’s figured out the key to making the teleportation device work. 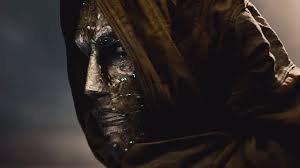 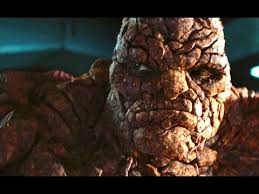 After recruiting his genius, but wayward son Johnny (Michael B. Jordan) to help build the device, Dr. Storm reaches out to a former protege for help. Victor Von Doom (Toby Kebbell) actually got the project as far as it could go before he left (for reasons unexplained). But when told of Reed and his solution for making the device work, he’s convinced to rejoin the team. Not only to help build the device, but to be close to Sue – whom he has an unrequited crush on. Eventually, the device is tested (using a chimpanzee in lieu of a human), and they successfully transport the chimp to (what they call) Planet Zero (which looks a lot like a Western plain, with pointed rock formations & green pools of…something). The boys get drunk later that evening, and decide that they should be the first humans to go to Planet Zero, so Reed calls up Ben (because Ben was with him from the beginning), and along with Victor and Johnny, strap themselves into place and transport themselves to the mysterious new planet (or is it a new dimension? It’s referred to as both). They arrive safely, but after a bit of exploration, they run into a serious issue and three of them barely escape with their lives. Poor Victor falls into a pool of the green goop, and doesn’t make it out. Sue finds out that they used the machine, and after helping Reed, Johnny & Ben return, she is bathed with an odd radiation that knocks her unconscious – and her three friends forever changed. 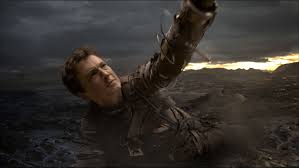 Cut to one year later. Reed now has the power to stretch his limbs, Johnny is literally on fire, and Ben is transformed into a hulking mass of rock with super strength. What sort of sucks is that it takes nearly an hour to get to the transformed teenagers (remember, Reed was plucked straight out of high school). The government has taken Ben and inserted him into combat situations in which his brute strength is very handy. Johnny has mastered the control of his flame, and is also able to fly while he’s on fire. Sue has the power to turn invisible, and she can conjure up force fields. Reed can control his stretching abilities, but doesn’t approve of the manner that the government is using his friends. But all of this is fluff because Victor didn’t perish on Planet Zero, he’s gained amazing new powers, and is especially angry at Reed and the others for leaving him there to die (Reed tried to help, but ultimately couldn’t). With the Earth in peril, Reed, Johnny, Sue and Ben go back to Planet Zero to stop Doom from destroying our planet.

There’s a lot that’s wrong with this film, but there are a few good things happening as well. All of the actors are on point here, and take their roles quite seriously. Reg E. Cathey is especially forceful in his role as Franklin Storm (which is actually the name of Reed & Sue’s son in the FF comic). The four actors in the lead roles are uniformly good, but that leads me to the first problem: There is absolutely no humor in this film whatsoever. Say what you will about the previous FF movies, but they were fun. This new iteration of the team is about as dour as dour can be, no one seems to be having any fun in this film whatsoever. If that was the intention of the director (Josh “Chronicle” Trank), he succeeded. But the film fairly screams for a bit of humor from its slow & dumb script (written by Simon Kinberg, Jeremy Slater & Trank). An example of its stupidity: Early on in the film, Sue relates how special suits must be made because tests on the sand from Planet Zero show that it’s not fit for humanity. Yet when the chimp is sent across, he’s wearing no suit whatsoever – and comes back alive and well. Why do we need suits and chimps don’t? By the way, the chimp is a CGI construct – a very unconvincing CGI construct. Since the chimp is in the film for literally seven seconds, why couldn’t they get a real chimp? Seems to me that would be a lot cheaper than a CGI chimp. But what do I know? And by the way, where are Reed’s parents during all of this? Where are Ben’s parents? They’re still teenagers, but the film just ignores their parental ties completely. And what exactly is the Baxter Organization? Reed gets a full scholarship to what? There is no school on display in the Baxter building, and Reed is immediately put to work building the transporter. He’s essentially a laborer working for a unseen master, not a student. 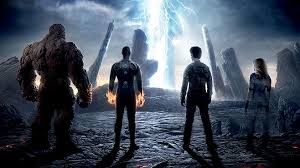 The special effects are hit and miss for the most part, but I do think that the CGI used to create The Thing is fairly impressive. I’ve read a lot of negative comments on Mr. Grimm’s appearance, but I thought he looked pretty cool & believably real. Otherwise, the effects on the film are just OK – More miss than hit in the long run. The film fails in what’s most important for a comic book film, it’s not entertaining in the least. Fantastic Four takes way too long before debuting the superhero side to its characters, and it lacks any humor, tension or excitement. It just sits there like a pile of rocks, content to move things along as sluggishly as possible. In its attempt to give its main characters depth, it ignores what makes this genre so successful – action & humor.

There have been rumors of troubles with director Josh Trank. He allegedly abused funds, made changes to the script, repeatedly arrived onset drunk and delayed production enough that, once the studio saw the first cut – they demanded reshoots. To be fair, these are just rumors, so whether or not they were the reasons the film fails so massively is merely conjecture at this point. But Fantastic Four is so dull & lifeless, that I have to assume that Trank is responsible for some of those problems. Officially, this is 20th Century Fox’ third attempt at bringing the quartet to the big screen, and I think it’s safe to say that they just don’t know what the hell to do with the property. Apparently, part of the reason the film was made was because Fox was about to lose their rights to the property. I’d suggest that they should just relinquish their rights to the property to Marvel Studios immediately, just give them up to a studio that knows how to make superhero movies. They finally relinquished Spider Man to Marvel after that last lousy film he was featured in, why not do the right thing and give up the Fantastic Four as well?

Because as it stands right now, their latest attempt shouldn’t be called Fantastic Four.