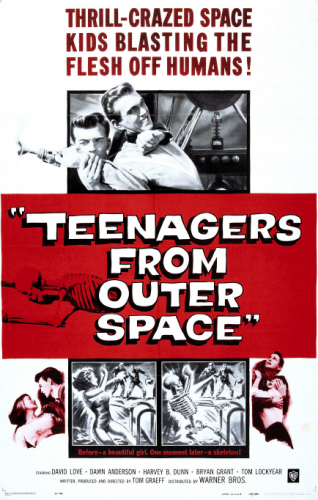 SYNOPSIS:
“A young alien (David Love) falls for a pretty teenage Earth girl (Dawn Anderson) and they team up to try to stop the plans of his invading cohorts, who intend to use Earth as a food-breeding ground for giant lobsters from their planet. The invaders, who arrive in a flying saucer, carry deadly ray guns that turn Earth-people into skeletons.” (courtesy IMDB)

REVIEW:
Possibly the most terrible and mystifying place anything could come from is Outer Space. The second most terrible and mystifying place is, of course, Puberty. So this week I add terror to terror in the utterly mystifying Teenagers From Outer Space (1959). No, not one of those lame eighties college sex romps as you might have guessed from the title, but a rather entertaining black and white effort from 1959 starring, well, me! I was only paid once, but I play just about every disintegrated character in the film! I swear, I’ve never had so much screen-time in a single feature! Look out for my tattoo.

The film is actually about aliens who land on Earth to use it as a farm for its food supply, and the crew of the ship includes several teenagers who look much older than the title suggests – sort of like Beverly Hills 90210 in jumpsuits. I think there are far too many nice people in Teenagers From Outer Space. Well, at first, anyway. The town is filled with nothing but nice people who want to help out, just begging for disintegration. You see, we’ve been invaded by Brylcreemed aliens in jump suits who want to use Earth as a breeding ground for Gargons, which are like yabbies that grow to ginogorous proportions!

Teenagers From Outer Space was filmed on location in and around Hollywood with a number of tell-tale landmarks like Bronson Canyon and Hollywood High School giving away the film’s hazy locale. One notable aspect of the film is that it was largely the work of a single person, Tom Graeff, who plays Joe the reporter. He also wrote, directed, edited, and produced the film, as well as providing cinematography, so-called special effects, and music coordination. Production associates Bryan Pearson, Ursula Pearson and Gene Sterling provided the film’s US$14,000 budget, which was less than half a shoe-string by the standards of the time. All three played major roles as a result – not because they put money in, but because it wasn’t enough money to hire more real actors. They employed a lot of guerrilla tactics in order to cut costs. Director Tom Graeff secured the location for Betty Morgan’s house for free by posing as a UCLA student, which would have been true five years earlier. The old lady who owned the house even supplied the electricity for free, so she deserves disintegration.

Other cost-cutting ideas didn’t pay off so well. The space costumes are simple flight suits clearly decorated with masking tape, dress shoes covered in socks, and surplus Air Force helmets. The disintegrator ray was a five-cent Hubley’s Atomic Disintegrator cap-gun, for those who can’t make out what’s written on the side, with a small light bulb and a mirror glued to the end reflecting an offstage light providing the awesome special effects that make this weapon look almost laughable. And apart from a shadowy giant lobster that would have needed an expensive oversized claw prop if it ever got close enough to actually attack someone, all the other events are either stock footage or take place off screen under the horrified gaze of our actors. The best effect is those ray guns leaving mere skeletons behind. It’s something Tim Burton would use later on in Mars Attacks! (1996), but he chose not to ask me to reprise my role. Disintegrate him too, I say!

Strangely enough, Graeff also pre-recorded some of the film’s dialogue for several scenes, and had the actors learn to synchronise their actions with the sound. The musical score of the film came from stock, the same stock score has been recycled in countless B-movies such as The Killer Shrews (1959) and the original Night Of The Living Dead (1968), so don’t be surprised if you find yourself humming along.

As you know, I don’t usually harp on too much about bad acting, but I must admit that the acting in Teenagers From Outer Space is particularly terrible, and the source of much of the movie’s unintended hilarity. This shouldn’t be too surprising, as Derek, the alien who wants out of the seafood business and runs away, is played by one David Love, one being the number of films he acted in. Production associate Bryan Pearson, whose real name was Bryan Grant but used a pseudonym to avoid union troubles, is Thor. He had one-off roles in the television shows Border Patrol, Perry Mason and Daniel Boone, but in this he’s the alien sent to track down renegade Derek, along the way asking a lot of questions, being rudely insistent and rather inconsiderately disintegrating people. And the occasional dog.

We meet Betty Morgan, played by Dawn Bender (which I’m sure we’ve all had at one time or another), as the owner of the dog vaporised by Thor. Bender had acted sporadically since the age of two, and bizarrely chose as her swan song a story about aliens on a sightseeing tour of middle America. Admittedly Thor is a little more murderous in his sightseeing, but not much worse than drunken backpackers. Now, they need a good, firm disintegrating. Ursula Pearson, here playing Hilda, was Bryan Pearson’s wife. Of course, Bryan Pearson’s real name was Bryan Grant, which means Ursula Pearson’s real name was Ursula Hansen. They were married, however, which I think they did just to confuse me. I could go on talking about the intersection of Inane and Insipid, but perhaps I should mention the best known actor, if not the best actor, or indeed the only known actor – anyway, the one face you probably will recognize if you don’t blink is the Spacecraft Captain, who is none other than Starker from Get Smart, King Moody. Yes, that’s as grand as it gets.

Much to the astonishment of nobody sane, the film failed to perform at the box office, placing further stress on an already-burdened Graeff. He suffered a breakdown and proclaimed himself the second coming of Christ, which was quite deluded as Roger Corman was clearly the second coming of Christ. After a number of public appearances followed by a subsequent arrest for disrupting a church service, Graeff disappeared from Hollywood for many years.

Perhaps that tinge of insanity adds to the low budget charm of Teenagers From Outer Space. One irresistible scene occurs when the love interest is in her room and she manages to change into the very same dress! It’s something that couldn’t be duplicated with all the money in the world, and probably shouldn’t be. And won’t be, if I have anything to do with it. How do we know they’re a superior alien race? Because they keep saying it all the time, that’s why! It must be true, they have spaceships, big foreheads and those nifty ray guns that instantly turn their targets into skeletons. I sometimes wish I had something like that when dealing with my editor, but it’s probably better that I don’t. 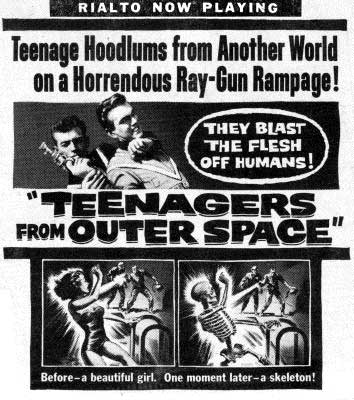 How many aliens did they manage to squeeze into that flying saucer, anyway? It turns out their flying saucer is bigger on the inside than the outside, a bit like the TARDIS. That’s pretty advanced, but it still looked like a tight fit in there. They may be a superior race that’s invented space travel, but they haven’t invented soft furnishings yet. And how were they going to cart back a fully grown Gargon back to their home planet in such a tiny ship? Oh, and did you spot my tattoo? I was really, really drunk. Anyway, please join me next week to have your innocence violated beyond description while I force you to submit to the horrors of…Horror News! Toodles! 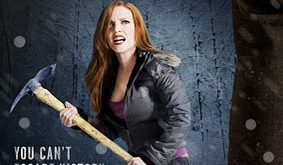