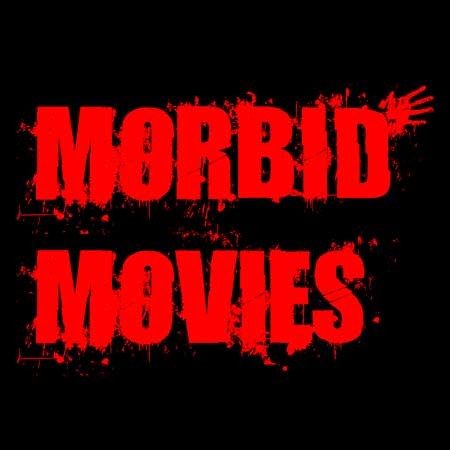 First off, please tell about yourself and how Morbid Movies began?

The whole purpose of Morbid Movies was to bring horror and cult classics back to the County. West Palm Beach used to have a theater called The Carefree that would show the Rocky Horror Picture Show every week and would regularly show cult classics and horror. Well the theater closed in 2005 and nobody really picked things up where they left off.

I had the general idea of what I wanted to do but wasn’t really sure where to start. I ran into Marc Ferman who does the Popcorn Nights  screenings in Miami at a convention and he told me how to get started. Referred me to a service called Tugg that’s pretty much like a Kickstarter for film screenings.

Please tell us about the events and the process that goes into picking the films you will be screening?

Our first screening in what’s known as the “Palm Beach County Grindhouse Series” was the 15th Anniversary of Battle Royale at the Movies of Lake Worth. We used Tugg to screen it and the response was pretty great. Battle Royale did over 90 tickets and impressed Movies of Lake Worth enough to begin working directly with the theater. The next screening Evil Dead 2 was an even bigger hit with over 110 in attendance. I can’t stress enough how thankful I am to be working with such an accommodating theater. The manager Rochelle and the entire staff have been very welcoming and open to all of this.

The process for picking the films is relatively easy. I try to pick a film that I believe will be a big enough draw but still special and rare enough that this might be the only time someone gets to see it in a movie theater. And honestly I tend to pick from my favorite films.

Once it’s decided what the next film will be it’s figuring out who currently has the theaterical rights then going to the theater Manager who handles the booking. What gets difficult is sometimes the rights have changed hands or there’s some issue that a specific film can’t be shown.

THE TEXAS CHAINSAW MASSACRE (1974) is considered to be an immense classic among the Horror world, what does the film mean to you?

It’s one of the few horror movies I actually find pretty frightening. I know they embellished the “true story” aspect of it but that sense of realism added a lot. There’s one thing in particular that’s always stuck with me and it’s the sound of the police camera flash bulb taking pictures. Chills right down the spine every time I hear it.

Please tell us how we contact you and are you thinking about expanding the events to other cities at all?

morbidmovies.com, @morbidmovies on Facebook, Instagram & Twitter and email info@morbidmovies.com.
There’s no plans for the Palm Beach County Grindhouse Series to leave the Movies of Lake Worth but I’m open to doing different events within the County though. There has been discussion of possibly doing doing smaller indie screenings outside of theaters. 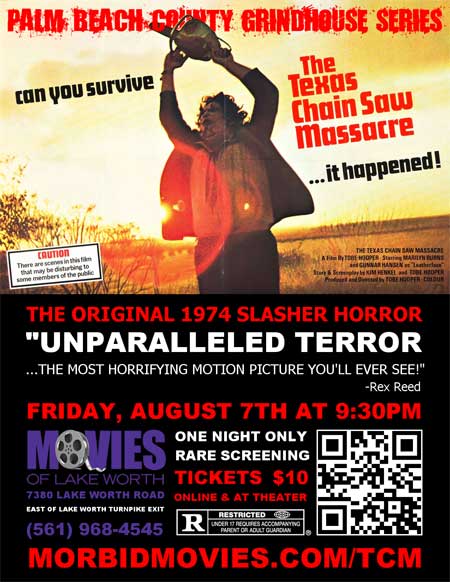 For September’s screening it’s actually going to be a Friday night kickoff for that weekend’s local Comic Book Convention, PalmCon. The screening will still be in Lake Worth but we’ll be at the convention in West Palm Beach for both days (September 25th & 26th) promoting the Grindhouse Series and hanging out with fans and friends. I hope to be able to announce the film very soon, just waiting for confirmation on the rights.

Who are some of your favorite Cult Classic Directors & Movies?

Directors, I’d say George Romero, Sam Raimi, John Carpenter & Kevin Smith.
Favorite cult films is all over the place for me. Return of the Living Dead, the Toho Godzilla films, Clerks, Evil Dead, Dawn of the Dead. And this is going to be a surprise but Smokey and the Bandit is one of my favorites and to me is definitely a cult classic.

Would you ever consider making your own “Cult classic” or “Grindhouse” genre related film?

I think it would be fun to make a horror movie with friends but for now I’d rather promote the movies and watch them rather than make them myself.

What films do you think embody what a cult classic is?

The Warriors, Blade Runner, Re-Animator, Clerks, Army of Darkness, Princess Bride, Donnie Darko, Mad Max. There’s tons of great examples out there. Pretty much the smaller films that no matter how much time has passed, will always have a devoted and dedicated fan base.

You have a merchandise page on your site, tell us what else we can expect to be added to the site (The pins are cool)
As far as merchandise goes we should have shirts and stickers soon but I am looking into getting more content for the site. I’ve had requests for reviews so it’s a strong possibility. 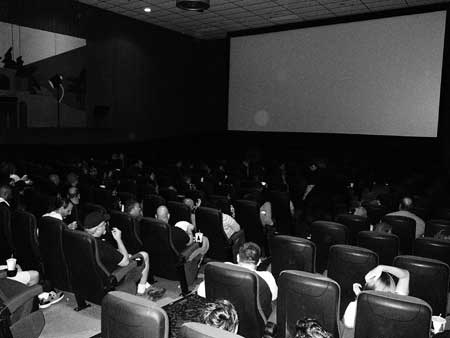 What was your reaction to the loss of Marilyn Burns?

Very saddening. After over a 10 year break she just started doing movies again too in the past few years. She was so great with the fans when she was at Spooky Empire in Orlando 2 years ago, just a very nice lady.

What advice would you give to people in the film industry?

Don’t take no for an answer. Find a niche that isn’t being filled and fill it yourself.

How do you feel about the re-makes of some of the classics?

I’d rather see something original but I don’t mind a remake as long as it honor’s the original while also bringing something different to the table. I liked the recent Evil Dead remake and Godzilla. There’s also great remakes that are classics like John Carpenter’s The Thing and Evil Dead 2 which is pretty much just Evil Dead with a bigger budget and more humor.