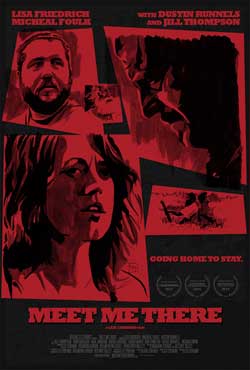 Ada and Calvin seek counseling for their intimacy problems and Ada discloses that she has no memories of herself as a child. Their therapist suggests that her blocked memories may be the result of something she experienced too horrible to remember. The couple decides to make a trip to Ada’s hometown to unearth her past. When they arrive, they begin to wonder if it is home … or someplace much darker.

Meet Me There is a production of Greenless Studios, which according to the company’s website, specializes, “in making ultra-low budget films look like a million bucks on the big screen.” In this case, they have succeeded on several fronts.

The movie opens with a quiet but disturbing introduction scene involving two strangers that meet each other in a bar and their ends in a still meadow in Sheol, Oklahoma. This opening scene is an effective precursor for what is to follow. For that matter, so is the town’s name, which is a Hebrew word denoting a place of darkness to which all the dead go or congregate.

We then meet Ada (Lisa Friedrich) and Calvin (Micheal Foulk) who have been a couple for several years. Their relationship has always been hampered by Ada’s inability to fully participate in sexual intimacy, but as of late, the problem has been getting worse and is impossible for them to ignore. In search of a solution, the couple seeks counselling, during which Ada reveals that she has no memories of herself as a child. The therapist suggests that her missing memories might be the result of an experience that was so horrifying and traumatic that her mind has blocked them as her only defense mechanism. The therapist suggests that looking at old pictures or home movies might prompt Ada’s memory. Calvin suggests that they go a step beyond and make the six-hour drive to visit Ada’s hometown of Sheol, a small town of 73 people with a church, a graveyard, a gas station, and little else.

The couple sets off for Sheol in search of Ada’s memories. It’s important to note that Ada is able to remember the town and other people, just nothing about herself. During the trip, Ada reveals that her mother worked as a crime scene cleaner when she wasn’t selling drugs with Ada’s father. Calvin is surprised that a town of 73 people would have the demand for a crime scene cleaner and Ada begins to recount dog killings, murders, and a concrete slab with a blood-filled drain. This is the first of many warnings that returning to Sheol might not be the best idea, but Ada seems oblivious to how ominous this sounds and Calvin is determined to help Ada, so they forge on. 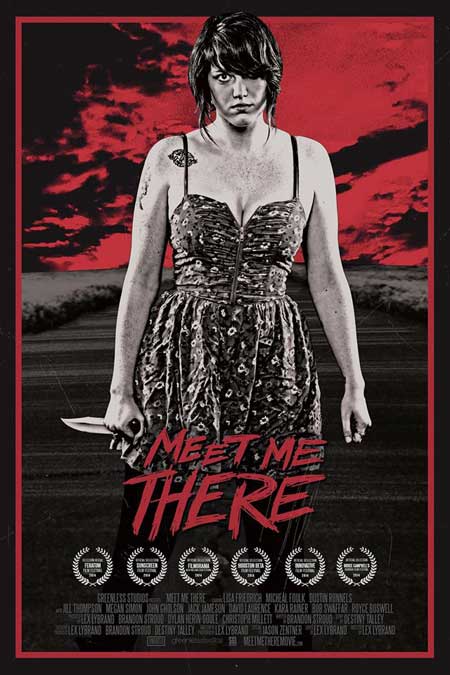 When they get to Sheol, the couple encounters ominous event after ominous event. The town is literally in the middle of nowhere and has no telephones or cellular signals. When her Aunt Lindsay (Jill Thompson) sees Ada’s tattoos, she shakes her head and tells her, “Cuttin’s in the flesh is for the dead.” Later they go to the church and meet Preacher Woodward (Dustin Runnels, aka Goldust, WWE), who seems to alternate between serving as a benevolent guide or a purveyor of boding evil. When they finally realize that they must leave, it turns out that nothing in Sheol is ever that simple or that easy.

In a low budget, independent production, the personnel often need to wear several hats. Meet Me There is no exception. Lex Lybrand served as Director, Cinematographer, Editor, Sound Editor, and Producer. Brandon Stroud was the writer – adapting Destiny Talley’s story – and also served as Boom Operator and Producer. The original score was created by Mark Daven. The direction, writing, score, and acting all contribute to the atmospheric tension that builds throughout the film. I was engrossed in the story, and Lisa Friedrich’s and Micheal Foulk’s portrayals sold me completely on the script’s justifications for the decisions they made and the actions they took. However, Calvin might wish that this time, he had elected NOT to dance with the Smurfs. Watch Meet Me There and you’ll understand what I mean. 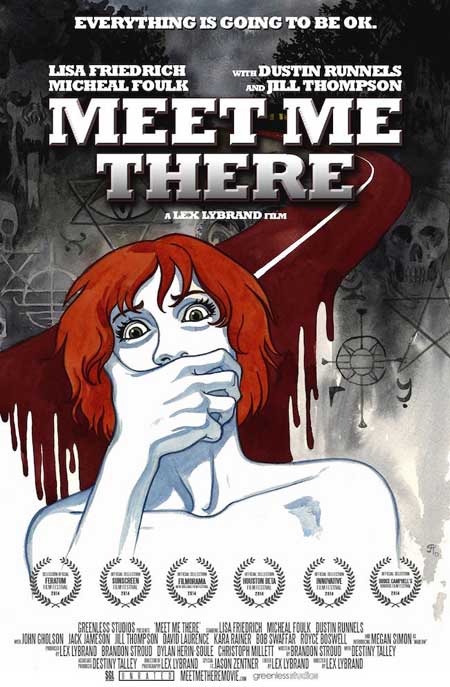 The only drawbacks of the film are what are to be expected in low budget efforts. Some scenes could have used a few more takes and adjustments. But all-in-all, this film is very close to being the best that it could be and I thoroughly enjoyed Meet Me There. On an ultra-low budget, indie, adjusted scale, I give this film a score of 4.5 out of 5 stars.

But that’s just me. Here’s a parting message from the film’s title song as sung in the movie by the golden-throated Megan Simon:

Where the night dissolves away into pure and perfect day,
I am going home to stay—Meet Me There.