REFLECTIONS stars CHIARA D’AMBROSIO as Amanda, a 7 year-old girl who, after losing her parents in a car crash, moves in with her grandfather, played by RAY WISE. A lonely Amanda befriends her own reflection in an old mirror, whom she names Polly, played by BIANCA D’AMBROSIO. We soon discover that Polly may not be merely a refection at all, but something much more sinister.

Yet another short film, this time we have REFLECTIONS. Written by Chris Frank, directed by Chris Bryant and released by The Blue Eyed Club…yea, nothing ominous about that name.

This is the story of a little girl named Amanda (Chiara D’Ambrosio) who has just lost her parents in a fatal car crash. She moves in with her kindly grandfather (Ray Wise) as she tries to come to terms with how her life has changed. She is lonely and sad, which is to be expected.

Grandpa’s house is huge and cavernous, with lots of rooms to explore. Amanda wanders listlessly around the home and discovers a huge mirror, all by itself in an empty room. As she stands staring into the mirror, the reflection suddenly takes on a life of it’s own. The reflection introduces herself as Polly (Bianca D’Ambrosio). This, of course, scares Amanda half to death and she screams for Grandpa. 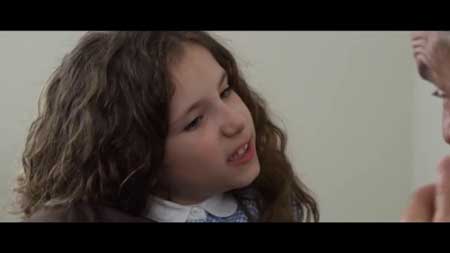 Initially announcing she has no intention of ever entering that room again, Amanda ultimately decides to face her fear of the mirror.

This film has a really great cast. Ray Wise is known to most of us from Robocop, Mad Men, How I Met Your Mother, and tons of other productions.

Chiara and Bianca D’Ambrosio are identical twins, and have a surprising amount of credits to their young careers. They have a lot of work playing the same child, which is pretty common for twins in the industry. Projects like The Young and the Restless, Criminal Minds, Parks and Recreation, and many others.

Writer Chris Frank has one other video short to his credit, and director Chris Bryant has one other to his credit as a writer. So this is a first time collaboration for two relatively inexperienced filmmakers. Honestly, this film does not have the appearance of being made by amatuers. The production values, cast performances, and special effects are really top notch.

The visual effects supervisor is Jeff Maynard, a producer and director with tons of credits to his name in those capacities. However, this is first time as a VFX director and he really did a good job.

So using my special “short scale” of one to five, five being awesome, I’m giving this film 5 creepy twins