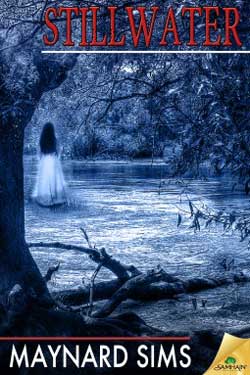 While coping with a recent divorce and an accident that has confined her to a wheel chair a young romance author Elizabeth Alvarini seeks refuge in a rental cabin known as Stillwater to work on her latest novel. An ominous presence may not be so accommodating. After Elizabeth begins to meet and socialize with the locals, layers of the mystery behind the death of Jessica Franklin and the spirit’s origin begin to unravel. Will Elizabeth survive the sinister intentions within the old cabin or will she simply succumb to the legend behind Stillwater?

One of the many cautions a critic must adhere to is refraining from divulging too many plot spoilers within any chosen story. Naturally one prefers not to remove from the maximum mystique the author has so diligently crafted. In the case of Stillwater the element of mystique began prior to even reading the first page. I’m increasingly impressed with the repertoire of talented authors Samhain Publishing has within their arsenal. Maynard Sims is no exception, embracing the story telling process seemingly with ease. Readers can be rest assured that the enchantment begins instantly and continuously elevates to a level of utter infectious addiction. Perhaps I’m going out on a limb here by disclosing unveiling the nature of mystique touched upon earlier. So mesmerized with the stylistic prose of this tale I was equally enthralled to discover Maynard Sims is in actually not a sole author but a team of collaborators known as Len Maynard and Mick Sims. The novelty of collaborating wordsmiths has always fascinated me. Whether it’s Stephen King and Peter Straub, Patrick and Phillip Freivald or any number of countless other duos, the collaboration process has always endeared me. Writers have plenty of adversity and obstacles to overcome within the drafting process. The idea of two writers working cohesively with a common goal in mind emphasizes the magic and puts it on another level.

Perhaps is most admirable about the prose of Maynard Sims’s Stillwater is the ability to outline subtle exposition into the lives of main protagonist Elizabeth Alvarini’s and shift into the present. The readers are also privy to the background of The Franklins, Bernard, Dolores and young Jessica. While the tone of the tale drifts between the past and present in most of the main characters’ background the process does not retract from the pace of the plot. Often readers can become frustrated while learning the history of a chosen character and get distracted from the here and now. Maynard Sims manages to grasp the audience’s attention and keep it prisoner until the final pages unfold.

I particularly admire the use of a strong, independent female protagonist in Elizabeth Alvarini. Far too often writers fall into the pitfall tendency of crafting cookie cutter characters in a swift attempt to get their reading audience to relate to him or her faster. As a result a great deal of minorities are overlooked and forgotten rather than a more contemporary realism. The fact that Elizabeth is a paraplegic makes us empathize with her plight from the get go. Props should go to this clever writing team to going above and beyond in attempting something aside from the standard or norm.

Meticulous attention to realistic detail further suspends the believability factors in this tale. One can clearly see the writers have done extensive research in understanding the elements that surround their characters. The fact that Elizabeth continues to walk in her dreams as well as the psychological ramifications of her confinement reign true and only assist in making readers ponder the proverbial question, ‘what if?’ Once any author has inspired a train of thought in asking him or herself a series of questions that makes the story realistic and strike a chord deep within the cerebral cortex.

The dialogue that is exchanged between characters embodies realism. I enjoyed the references of Elizabeth talking to herself which is subjective to the reader. Is this a girl coming undone? A sign of a creative mind at work? Or something more dire or outlandish altogether?

A subtext of persistence and romance is engaging especially for such a strong willed young woman who incidentally is a romance author and has catered to the possibility of never loving again.

Dry British humour is a dead giveaway to the origins of this talented collaboration. It’s a necessary evil, if not a most deviant tactic in getting the readership to subconsciously let their guard down setting up the opportunity for the next big scare. Slang such as ‘buggered’ or ‘moggy’ may even prompt some hearty belly laughs from readers. A reference to Burke and Hare (notorious grave robbers in the 1800’s) may even tantalize readers with a taste for the darker sides of fiction meets fact.

Stillwater takes some unexpected plot dips, swerves and turns most readers could not possibly anticipate. The chapters and references with Jessica are so bone chillingly creepy it may very well inspire electrical utility companies to make a killing after many readers will be prompted to sleep with the lights on for a spell.

Overall a brilliantly crafted, spine tingling ghost story that will inspire many readers to explore additional endeavors from Maynard Sims.