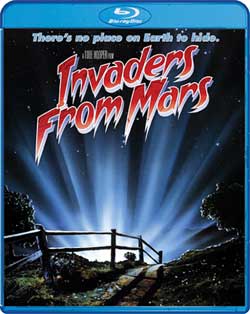 In this remake of the classic 50s SF tale, a boy tries to stop an invasion of his town by aliens who take over the the minds of his parents, his least-liked schoolteacher and other townspeople. With the aid of the school nurse the boy enlists the aid of the U.S. Marines.

The greatest thing when it comes to writing about movies is that you get to discover new favourites all the time. You find something in a movie that you have never seen which causes you to be enamoured with it. It could be that the story is relatable to something you have experienced in your past or something that you are currently experiencing. It could be a performance so captivating that you can’t look away from it. Most times it is a combination of many factors that cause you to feel this way about a movie. At their core, movies are art. As such, people get different emotions out of each work. The things that you like are what will allow you to like a movie. The things that you dislike will fuel your distaste. It all comes down to you.

I can say right off the bat that I liked Invaders From Mars quite a lot. There were many things about this 1986 remake of the 1953 film that worked for me. The story and cast were a big part of my positive feelings about the movie. Late one night, during a meteor shower, David Gardner (Hunter Carson) sees an alien spaceship land behind the hill in his backyard. He soon discovers that aliens are taking control of the minds of the population of his small town. With the help of his school nurse Linda Magnusson (Karen Black), he tries to prevent the aliens from taking over the world. Yes, I understand that it is basically another version of Invasion of the Body Snatchers. But I enjoy that Cold War era storyline where you don’t know who among you has been turned, much like the McCarthy era Americans didn’t know who among them was a communist sympathiser. The paranoia of that storyline itself is enough to get me invested in what is happening on screen.

Five cast members of Invaders From Mars had me interested in the movie when the opening credits rolled across the screen. Well, they didn’t really roll as much as they appeared on screen. The first was Laraine Newman. I am only familiar with her due to her work on Saturday Night Live. Having her play the mother of the lead child in a science fiction horror movie went against my idea of her skillset. She did a fairly good job with a role that didn’t make much of a difference on the overall story. Louise Fletcher also made an appearance as a school teacher who will stop at nothing short of getting David turned. She brings menace to the role that works for the movie. Bud Cort is an actor that I’ve seen a few times recently as I ended up watching some of his 70s and 80s work. His performance in this movie, notably in his final scene, was solid, though it didn’t stand out like it could have. The other two standouts in the movie are Karen Black and James Karen, both of whom are recognizable from the myriad of other films they have worked on. James Karen does a great job as General Climet Wilson, the man who brings in the firepower of the military against the aliens. He has fun while also being serious, which is exactly what was needed in the movie. Karen Black goes a little over-the-top in her reactions as Linda, but manages to create a believable relationship with Carson’s David character. That relationship allows me to forgive many of the problems within her performance. The rest of the cast was fairly good as well, especially Timothy Bottoms, who was able to transform from caring father into evil zombielike menace with an ease that I usually only see in the awards contenders at the end of the year.

The other major factor in my love of Invaders From Mars is twofold. The visuals in the movie were something that I wish newer movies would do more often. First, the creature design was different than what most aliens look like in movies. They were not humanoid, which is refreshing since the majority of extra-terrestrials in movies look like mutated humans. They were also practically done. Computer graphics can make a creature itself look more detailed; however, there is usually a disconnect between a computer animated character and a real physical being. The practical nature of the aliens in Invaders From Mars made interactions look proper. The other visual aspect that I enjoyed was the set design. I appreciate location shooting and the realism that it brings to movies. And I understand that computers can give life to an entire planet, such as Pandora in Avatar. But there is something to be said for a set that was built on a stage. A good set built on a stage, I mean. There are certain artistic flourishes that can be taken when designing a set from scratch that can’t be done with real locations. Something can look futuristic or other worldly. The sets could be used to convey a feeling that can’t be shown through a real location. Visually, it could just plain be artistic. Movies have gotten away from this since the time when Invaders From Mars was released. This movie gave me the visual pleasure that I had been craving.

In terms of sets, there are two that stood out to me in terms of their visuals. The first set that got my attention in Invaders From Mars was the backyard of David’s house. There was a dreamlike quality to the yard that made you feel the same awe as David did when the alien spaceship descended behind the hill. It clearly looked as though it was a soundstage, but captured the nostalgic feeling of a small town yard. The other set that I would like to highlight is the set that was used for the inside of the alien spaceship. As the movie progressed, the main characters ended up inside the spaceship in an attempt to stop the aliens. The ship was designed around a central room that resembled both the past and the future. It looked sort of like a cave, which worked because the ship was hiding underground and used tunnels and caves for entrances and exits. The inside of the ship also features futuristic curves and edges to most everything. Hence the blend of the future and the past. It was pleasant to the eye and nothing like it could have been found naturally.

Sometimes, certain aspects of a movie can make up for areas in which its quality is lacking. I would say that’s the case for Invaders From Mars. The great visuals provided by the sets and the creature design combined with the story to help make me not care about the flaws in the movie. I had a good time with this movie and I imagine that a lot of other people could. It may not be a classic, but it is a fun ride for the time that it is on. Check it out.